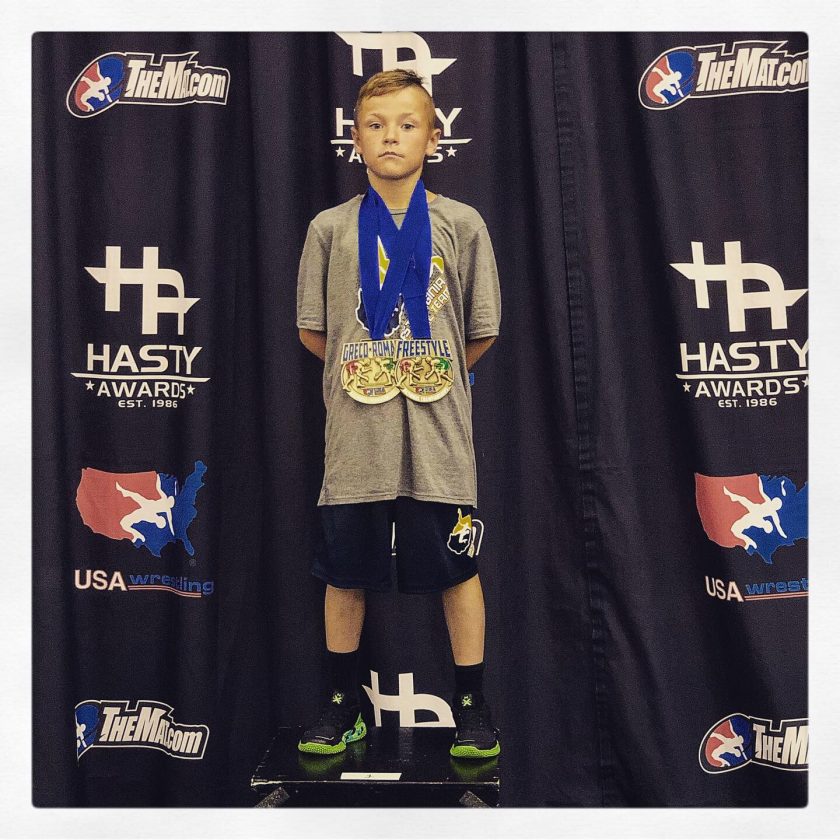 WHEELING — When the school year starts later this year and Brock Humphrey’s teacher asks him what he did over the summer, the fourth-grader at Warwood Middle School will have some interesting stories to tell.

Already an accomplished youth wrestler — the 10-year-old has won six W.Va. state championships — Humphrey added to his impressive list of accomplishments recently when he captured a pair of national titles during the Kids Nationals Freestyle national wrestling tournament at the Woodside Sports Dome in Dells, Wis.

He finished first in the Greco Roman and Freestyle competitions at 59 pounds in the 10-and-under age bracket, going 3-0 in each division.

“I just went out there and wrestled hard,” Humphrey said last week via telephone. “It was a great feeling. I’m proud of myself.”

Wrestling since the age of 4, Humphrey got his mat skills honestly as his father, Brian, was an OVAC Tournament champion and runnerup in West Virginia in 2004 during his senior season at Wheeling Park.

“I was pretty good, but not nearly as good as he is,” Brian said of his son. “He makes me look like I’ve never wrestled.”

“When he was 4 he cried and said he didn’t want to do it,” the older Humphrey recalled. “But once he tried it, he liked it and has never looked back.”

According to his father, there were 700 kids entered in the Greco Roman portion of the event and 800 in the Freestyle.

In the Greco Roman event, Humphrey recorded a pair of 10-0 technical falls before pinning his opponent in the finals. He was even more impressive in the Freestyle where he scored a trio of first-period falls.

“I really didn’t have much practice in Greco Roman and only a little in Freestyle,” he said.

There were 18 kids to win championships in both divisions, with three being in the 10-and-under ranks.

“I received messages from people telling me they’re pretty sure this is the first time a kid from West Virginia has won two national titles,” Brian Humphrey said. “That’s pretty neat.”

Humphrey is, according to his father, an astounding 552-24 in his career. He was a member of Team California during the Virginia Beach Nationals earlier this summer and went 11-0 to become a Gold All-American.

He is coached by former Lehigh University standout Troy Latters at Shaler High School, along with Brian Kapusta and Jody Stritmatter at Young Guns.

Another Wheeling youth, Isaac Martin, placed second in the Freestyle portion at 160 pounds in the 12-and-under age group. He is a five-time West Virginia state champion.