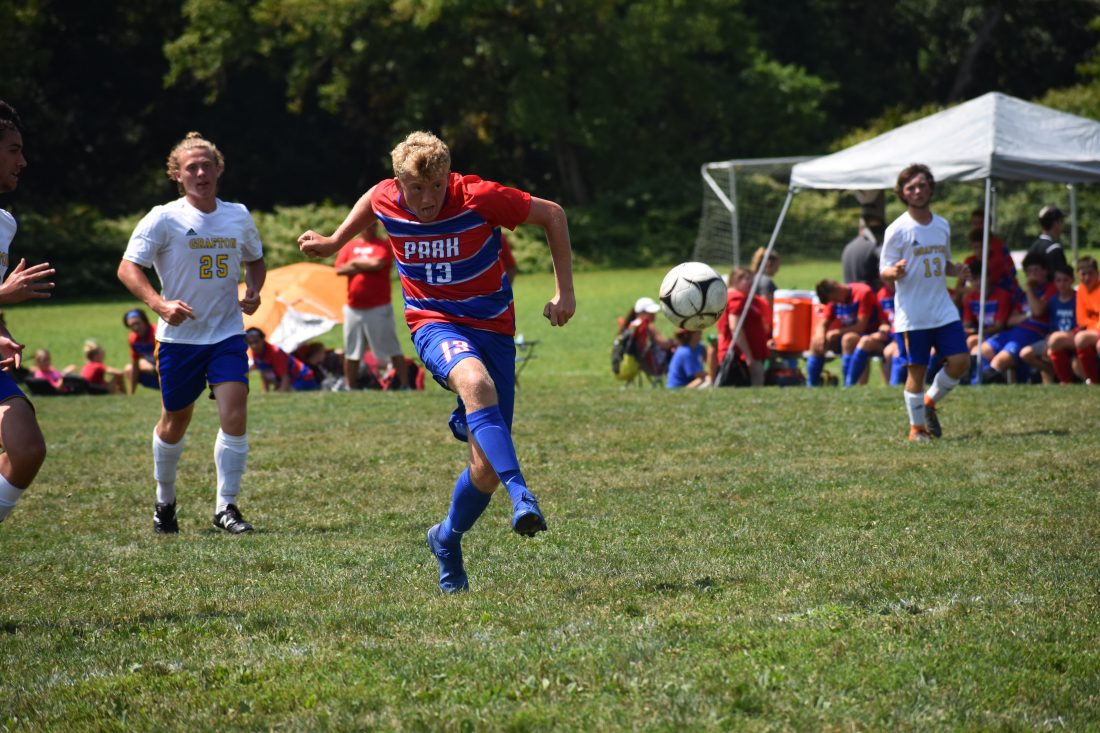 Photo by Kyle Lutz Wheeling Park’s Jason Pennybacker takes a shot on goal during a scrimmage against Grafton during the Brooke Soccer Classic on Saturday at Brooke High School.

WELLSBURG — The Brooke Soccer Classic has continued to bring teams from around West Virginia and Ohio together for a full day of soccer. On Saturday, Brooke High School hosted the sixth annual event where a total of 28 teams participated in a scrimmage-filled day to prepare for the upcoming season.

As the years progressed, so have the numbers of participants.

“My first year here, we started with 14 teams and then we just kept growing and growing,” Brooke boys coach Joe Pepe said. “With the school administration and the booster organization, they took the ball and ran with it. The referees, they’ve been very, very kind. They come here and we try to treat them good. We try to get them everything we can. It’s just great.”

“We kept climbing every year. People, they talk around the state,” Pepe said. “It’s a great facility. We have all these fields and with the school administration, Brooke County ,the boosters and the referees, its’ just fantastic. I’m just amazed by the whole thing.”

With the start of the season right around the corner, the annual event’s main priority is to let teams see what needs to be adjusted or worked on.

Each team played three scrimmages throughout the day that lasted 40 minutes per match.

“We try to emphasize to the teams that this is a little showcase scrimmage,” Pepe said. “We don’t pass out trophies or medals. It’s just to see what you need to work on with your teams. It’s nice and it’s great to see all these tents. We thought about breaking it up into two days, but that takes away from the whole atmosphere of being here.”

With such a great turnout year in and year out, many teams have been participating in the event for multiple years. For the Wheeling Park boys, it is the fourth year the Patriots participated.

“Coach Pepe does a phenomenal job with organizing this,” Wheeling Park boys coach Mario Julian said. “The competition is good. It’s all in one area so you can scout some of your opponents for the regular season. But, it’s a shout out to Brooke that they can organize something and get everybody together for the players.”

While they didn’t play any opponents on Saturday they will see during the regular season, Julian likes the fact he’s able to watch their games while the Patriots are waiting for their next game.

“You got University here, you got Linsly here and Brooke’s here. We play those guys in the regular season, so it’s nice to get a chance to scout them a little bit early,” Julian said.

“We’ve come the three years I’ve been here and I absolutely love it,” Wells said. “Because not only do you get to see your girls play, but also see some other teams play and get a good scout. What is nice about it is we go from seeing a team like Morgantown as one of the top quality teams in the state to a team like us in East Fairmont.

“We went from a team that dominated possession against us and we got to work on our defense and counters. Then, against East Fairmont, the possession was like 60-40, if not 50-50. It’s an opportunity to get three games in. The girls aren’t dead tired, you’re only playing 40 minutes instead of a whole game and it gives you a chance as a coach in an event like this to make adjustments. It gives you a little more hands on as a coach here, but it is a great event. They put it on really well.”

Linsly coach Darryl Crews noted he enjoys the amount of competition at the event as well as getting to critique his team before another match starts.

“I’m really glad that Brooke puts this together. It gives us a chance to play against some quality opponents,” Crews said. “The three-match format, we’ll go talk to our team about what we can improve on from last game. I really enjoy it. It’s well-run and very beneficial.”

Added Wheeling Park girls coach Carrie Hanna: “It’s just a wonderful way to start out the season, get to play a lot of different teams and have an opportunity to see all of your players play. It’s very well-run. The people at Brooke always put on great events.”

The word about the Brooke Soccer Classic has had such a positive impact that Pepe has around three teams on both the boys and girls side on a waiting list. In fact, Pepe said a team they scrimmaged earlier in the week asked about it.

Pepe also stated that the referees aren’t just local ones. Hence why the event keeps being a success.

“This year we had four referees from Central West Virginia come up. That’s how it’s growing,” Pepe said.