Coordinators With a Chance To Make Impact 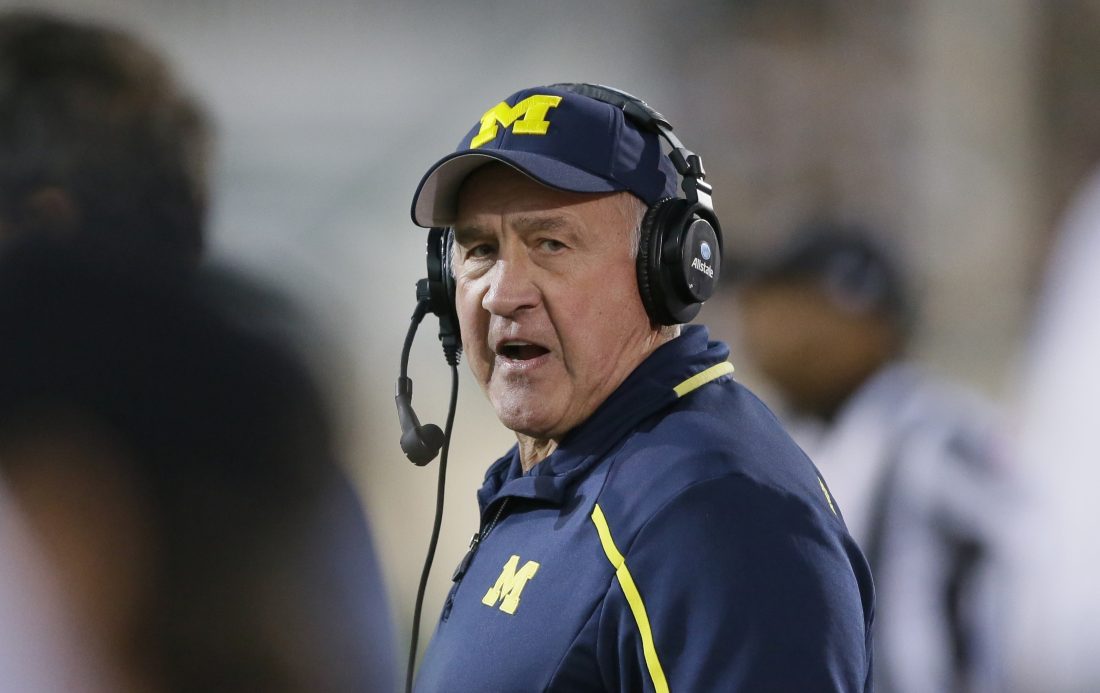 FILE - In this Saturday, Oct. 25, 2014 file photo, Michigan defensive coordinator Greg Mattison walks the sidelines during the second half of an NCAA college football game against Michigan State in East Lansing, Mich. New Buckeyes coach Ryan Day swiped Mattison from Michigan. One of the most respected defensive coaches in the country, the 69-year-old Mattison now joins forces with the 40-year-old Hafley to remake a defense that was maybe the worst in school history last year. Scheme tweaks include the use of a promising defensive back Shaun Wade in a safety/linebacker hybrid role. (AP Photo/Carlos Osorio, File)

As major college football programs grow in size and complexity, the most important job a head coach has is hiring talented assistants and staff members.

Coordinators are especially pivotal because they often operate with near autonomy — especially when their expertise differs with that of the head coach. A good coordinator hire can change the trajectory of a program.

A few head coaches are banking on that this season. These new coordinators could have a major impact on not just their teams, but the entire college football season.

Coach Willie Taggart drew some scrutiny for hiring Briles, who worked for his father, Art, at Baylor as that school went through a bruising scandal tied to sexual assault accusations. There is no questioning the move based on previous on-field results. At Baylor, FAU and Houston, Kendal Briles’ offenses have put up big numbers. He will have to work around a deficient offensive line, but if the offense clicks then Taggart’s second year in Tallahassee should be much better than his first.

New coach Manny Diaz calls luring Enos from Alabama the most important transfer he landed this offseason. Few teams have been so shackled by poor quarterback play the past couple seasons. If Enos can turn either N’Kosi Perry, Tate Martell or Jarren Williams into an above-average QB, the Hurricanes’ first year under former defensive coordinator Diaz could be a memorable one.

Gattis is perhaps the most intriguing new offensive coordinator in the country as Jim Harbaugh seems to be ceding control in favor of a more modern approach. It’s not as if the Wolverines weren’t running spread elements and run-pass options last season with quarterback Shea Patterson. But bringing in Gattis suggests a more immersive approach. Considering all the attention and scrutiny Harbaugh gets, however this goes will either be viewed as a wild success or a spectacular failure even if the reality is somewhere in between.

Grinch quickly built a reputation for putting together competitive defenses without a bunch of blue-chippers at Washington State, then spent last year at Ohio State. He bounced to Oklahoma this offseason as Lincoln Riley tries to find a solution to the Sooners’ lingering defensive issues. The core problem in Norman seems to be talent acquisition and development, which takes time to fix. Oklahoma hopes Grinch can clean up the missed tackles and assignments and get the Sooners’ defense to respectable in 2019.

Harrell was Plan B for USC coach Clay Helton when Kliff Kingsbury bailed on the Trojans OC job to become an NFL head coach. Harrell gets to plug former five-star recruit in JT Daniels into his version of the Air Raid. How well that works out could very well determine if Helton keeps his job. No pressure, Graham.

New Buckeyes coach Ryan Day swiped Mattison from Michigan. One of the most respected defensive coaches in the country, the 69-year-old Mattison now joins forces with the 40-year-old Hafley to remake a defense that was maybe the worst in school history last year. Scheme tweaks include the use of a promising defensive back Shaun Wade in a safety/linebacker hybrid role.