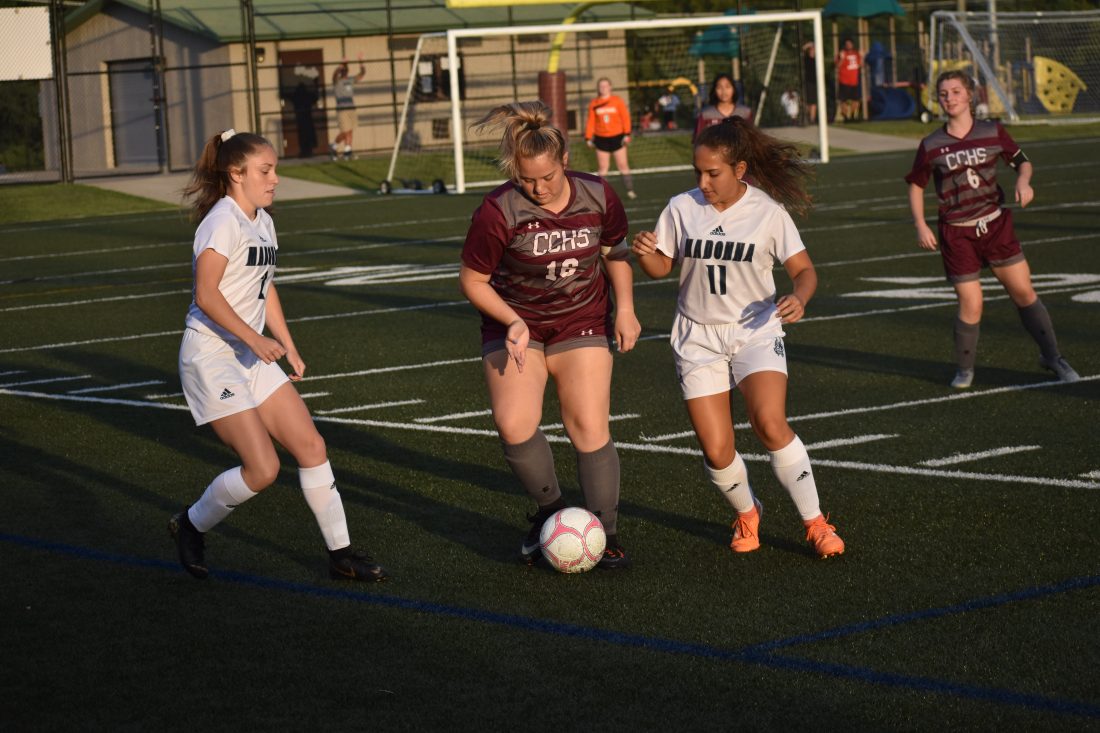 WHEELING — With a roster that includes seven players with a year of high school soccer experience or less, Madonna girls’ coach Bob Kolanko might have been thrilled if his team just showed up Friday against Wheeling Central and put on a decent performance.

However, Kolanko was even more thrilled with the big smile his team put on his face after going on the road and beating the Maroon Knights in a mutual season opener.

Earning a 1-1 first half deadlock, the Blue Dons turned up the heat on both offense and defense in the second, getting a game-winning 25-yard boot from sophomore Isabella Pulice in the process, and gained a prized 2-1 victory over their sectional rivals on the turf at the 16th Street Sports Complex.

“I think we had some first-game jitters coming out, not really knowing what they were going to bring at us, but after feeling them out we reacted, and played, very well in the second half,” Kolanko said.

Coach Julie Barack’s Central squad actually took the lead first, midway through the opening half. Freshman Peyton Smith’s shot-on-goal, off of a nice pass from senior Elisabeth Bockstoce, was batted away by Madonna keeper Abby Macek before junior Abby Gerney blasted the rebound into the back of the net for a 1-0 reading.

The score remained the same until the Blue Dons knotted things up with just five minutes to game in the half. Senior Kelsey Crawford took a pass from classmate Kali Krynicki and booted it between the legs of Maroon Knights’ keeper Elizabeth Romanek for the equalizer.

While Madonna scored only one goal in the second half, the game-winner, the Dons out-shot the Maroon Knights by a 4-0 margin and used some excellent passing to control the tempo.

Pulice’s game-winner, 20 minutes in, came off a pass from Kristina Lesho with the sophomore burying the ball high into the left corner of the net over Romanek’s out-stretched arms to make it 2-1.

Wheeling Central had one final golden opportunity just five minutes later, however, a boot off of a corner kick sailed harmlessly over the top of the goal.

“We have so many young and inexperienced kids and I just honestly could not be any prouder of these girls,” Kolanko said. “To come on the road in the season-opener and beat your rival, a good Wheeling Central team, it’s a good feeling.

“You really hate to think ahead this early in the season, but the OVAC Tournament comes around very quickly and this is the kind of win that carries a lot of mental help and points.”

Barack, meanwhile, was actually only getting her first look at her team against another squad.

“We had our only scheduled scrimmage cancelled, so this is really the first time we have seen ourselves against another team,” Barack said. “And we knew coming in there could be some growing pains with players playing out of position and such. But I’ll take this loss on myself for not having the girls prepared enough.

“I felt like we played strong on defense, even though we are going to need to continue to grow at midfield and up. I have a lot of confidence in our back. Hopefully we can continue to build and eventually peak at the right time.

“The next few games we will probably continue to play around with things and try to figure out what is really going to work for us. You hate to lose this game, but by no means is the season over.”