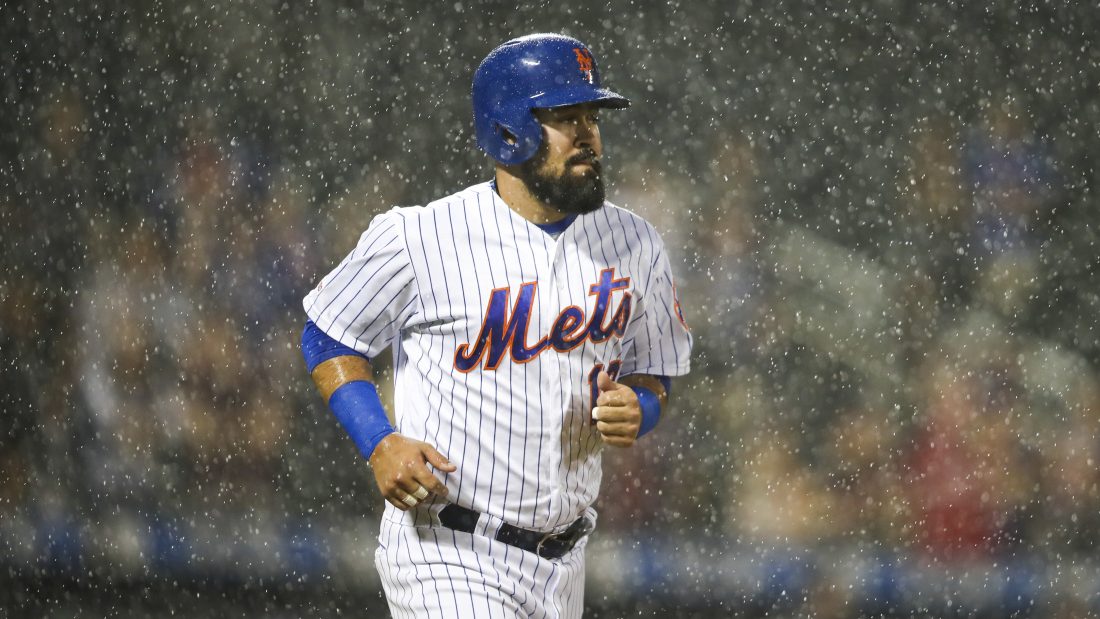 New York Mets shortstop Luis Guillorme runs to first after being walked during the eighth inning of a baseball game against the Cleveland Indians, Thursday, Aug. 22, 2019, in New York. (AP Photo/Mary Altaffer)

NEW YORK (AP) — Noah Syndergaard retired the first 16 hitters and allowed two hits over six dominant innings before a heavy storm interrupted him, and the New York Mets beat the Cleveland Indians 2-0 Thursday night in a rain-shortened game for their fifth straight win.

The game was called with New York batting in the eighth inning after a second rain delay.

The Mets completed a three-game sweep. They’ve won 13 of their last 14 home games, helping them get into the NL wild-card mix.

Cleveland’s first visit to Citi Field was a flop and its seven-game trip through New York that began at Yankee Stadium ended with a 2-5 record. The Indians also lost for the seventh time in nine games overall and dropped 3 1/2 games behind Minnesota in the AL Central.

Syndergaard (9-6) did not allow anyone to reach until Tyler Naquin lined a 1-2 changeup to center field for a clean single with one out in the sixth. He gave up a second hit to Francisco Lindor two batters later but aided by first baseman Pete Alonso’s diving stop, Syndergaard ended the inning by retiring Greg Allen.

It briefly rained as the Indians batted in the sixth.

Heavy rain and wind started as Wilson Ramos batted with a runner on first and two outs in the bottom half in an 0-1 count.

Play was halted for 2 hours, 28 minutes and when the game resumed most of the fans who stayed moved down. As the Mets started batting in the eighth, heavy rain returned, and play was halted with runners at first and third.

After a delay of 36 minutes, the game was called.

Ramos had a two-run double in the fourth that extended his hitting streak to 16 games, New York’s longest since Carlos Beltran also hit in 16 straight games in 2009.

Before Naquin singled, the closest the Indians came to their first hit was in the fourth.

Allen hit a long fly ball that appeared it would bounce in front of the warning track, but left fielder J.D. Davis raced back, ran the ball down and made an over-the-shoulder catch for the second out.

The Mets were held without a hit until getting three in the fourth off Cleveland rookie Aaron Civale (1-3). Joe Panik opened the inning with a single, Michael Conforto followed with a ground-rule double and Ramos lined a double down the right-field line.

Jeurys Familia and Paul Sewald pitched an inning apiece. Sewald was credited with his third career save.

Mets: RHP Marcus Stroman (left hamstring tightness) said he expects to make his next scheduled start Tuesday against the Cubs. . IF/OF Jeff McNeil (strained left hamstring) began a rehab assignment with Triple-A Syracuse…. 2B Robinson Cano (torn left hamstring) did some running and played light catch in the outfield. . IF Jed Lowrie (sprained left knee) went 1 for 4 as the DH in a rehab game for Class A St. Lucie. . IF Ruben Tejada was designated for assignment and RHP Chris Flexen was recalled from Syracuse.