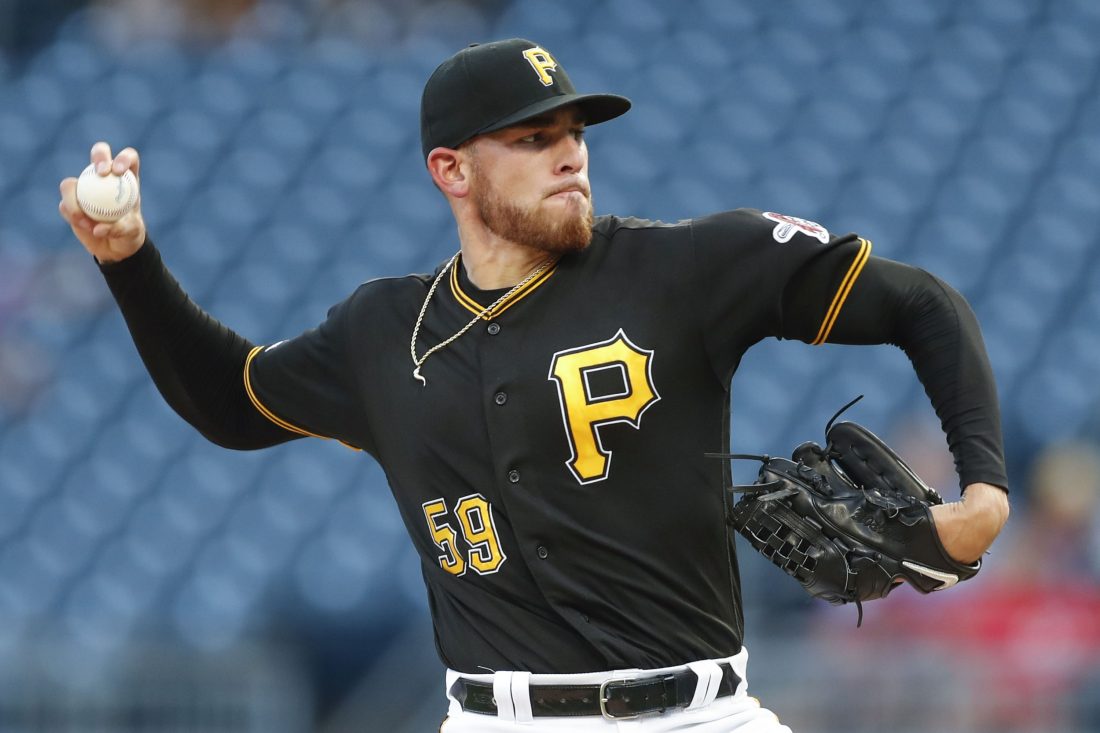 PITTSBURGH — Patrick Corbin gave the Nationals another stellar outing in his first season in Washington.

Corbin, signed to a six-year, $140 million deal last winter, pitched eight scoreless innings to remain unbeaten in more than two months, and Asdrubal Cabrera had a three-run home run in a six-run third as the Nationals rolled to an 11-1 victory over the Pittsburgh Pirates on Wednesday night.

Corbin (10-5) struck out four and walked two while throwing 93 pitches to help the Nationals maintain their lead atop the National League wild-card standings.

“He was really good,” Martinez said. “He pounded the strike zone and kept everything down. He was awesome.”

“He just throttled us,” Pirates manager Clint Hurdle said. “We had no answers.”

Corbin was three outs away from his second shutout this season and third of his seven-year career. However, with the Nationals ahead 11-0, Washington manager Dave Martinez decided to have Tanner Rainey pitch the ninth inning.

“It’s a long season and why not save some pitches, really, and give someone else some work?” Corbin said. “I don’t blame (Martinez).”

Joe Musgrove (8-12) gave up six runs and seven hits in five innings as Pittsburgh lost for the 29th time in 37 games since the All-Star break.

“I didn’t really have good stuff tonight from the bullpen all the way out through the fifth inning,” Musgrove said. “It was just one of those nights where I was battling the best I could.”

Adam Eaton opened the scoring in the third with an RBI double and Anthony Rendon followed with a two-run single, giving him 100 RBIs. Following a walk to Juan Soto, Cabrera hit a drive to straightaway center field to make it 6-0.

It was Cabrera’s second home run since being claimed Aug. 6 off waivers from the Texas Rangers and 14th overall. He was filling in at second base for Brian Dozier, who is on paternity leave.

Cabrera believes being reunited with hitting coach Kevin Long has helped. They also worked together with the New York Mets.

“He knows when I’m swinging the ball well and when I’m not,” Cabrera said. “I feel very comfortable with him.”

Corbin retired 11 batters in a row until Jacob Stallings and Erik Gonzalez hit consecutive singles with one out in the fifth inning. However, Corbin escaped the jam by getting pinch-hitter Melky Cabrera to fly out and Kevin Newman to ground out.

Washington added three runs in the eighth when Yan Gomes hit a two-run double and scored on a double by Corbin. In the ninth, pinch-hitter Adrian Sanchez and Trea Turner hit back-to-back RBI singles.

Turner has reached base safely in a career-best 28 straight games.

Josh Bell’s run-scoring double in the ninth prevented the Pirates from being shut out.

Nationals: RHP Joe Ross (bruised right shin) will throw a bullpen session Thursday before the team determines whether he can make his next scheduled start Saturday against the Cubs at Chicago. Ross left in the fourth inning of Monday’s game after being hit by a hard one-hopper by Pirates 1B Bell. If Ross is unable to pitch, RHP Eric Fedde will start instead.

Pirates: RHP Chris Archer (right shoulder inflammation) and RHP Clay Holmes (right quadriceps discomfort) were placed on the injured list. Archer left Tuesday’s game with the Nationals after the first inning and Holmes followed by pitching 3 2/3 innings. Archer will not throw for at least a week then be evaluated. … RHP Dario Agrazal and RHP Parker Markel were recalled from Triple-A Indianapolis. Agrazal is expected to start Sunday against the Cincinnati Reds. … RF Gregory Polanco (right shoulder inflammation) has started participating in baseball activities at the team’s spring training facility in Bradenton, Fla.

The Nationals signed veteran LHP Sam Freeman as a free agent and assigned him to Triple-A Fresno. Freeman made one relief appearance for the Los Angeles Angels earlier this season and has also pitched in the major leagues with four other teams.

Nationals: RHP Max Scherzer (9-5, 2.41 ERA) is on course to be activated from the IL and start in the finale of the four-game series. The three-time Cy Young Award winner has been out since July 26 with a mid-back strain.

The Braves are 14-4 against Miami this year after winning the 2018 season series between the NL East rivals 14-5.

Teheran (8-8) combined with Sean Newcomb and Josh Tomlin for a seven-hitter. The right-hander allowed five hits in seven innings.

Acuna’s shot off Caleb Smith (8-7) in the fifth cleared the center field wall. His team-leading 36th homer came one night after he was hit by Elieser Hernandez’s first pitch, leading to the ejection of Braves manager Brian Snitker.

Castillo (12-5), who allowed nine hits and eight runs on Friday against St. Louis, bounced back to limit San Diego to five hits and one run with four strikeouts.

The Reds sent nine batters to the plate while scoring three runs in a third inning, started by Eric Yardley (0-1), who got the loss in his major league debut.

Nick Senzel led off with a line drive that left fielder Josh Naylor misplayed for a two-base error and scored one out later on Eugenio Suarez’s single.

Iglesias lofted his ninth homer of the season into the seats down the left-field line with one out in the fourth inning for a 4-1 lead.

Melville (1-0), a 29-year-old right-hander with just six previous big-league appearances who started this season in independent ball, limited Arizona to a first-inning double and a sixth-inning home run to go with four strikeouts and two walks. He also picked up his first major-league hit — a two-out, fourth-inning single — and his first two career RBIs.

Ketel Marte and Alex Avila homered for the Diamondbacks, who had their four-game win streak snapped.

The Rockies jumped on struggling Arizona starter Mike Leake (9-10) early with two runs on three straight singles and a fielder’s choice in the top of the first.