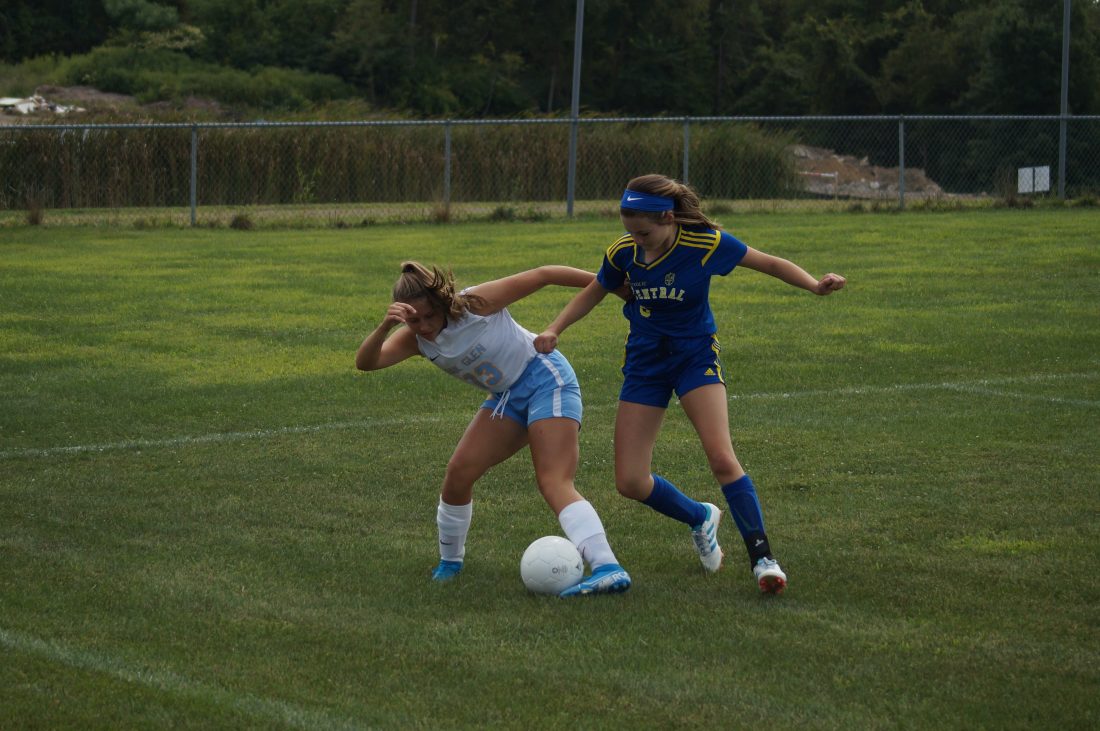 STEUBENVILLE — Coming off a trip to the West Virginia state tournament a season ago, Ryan Wells knew his Oak Glen soccer team was going to have a few holes to fill.

A couple of injuries added more holes before the season began. It has not slowed down the Golden Bears, though, as it has been so far, so good during opening weekend.

Oak Glen picked up its second win in as many days Saturday at the Tony Rencinella Soccer Field at the Crusaders Sports Complex, pulling away from Steubenville Catholic for a 9-2 victory.

“We’re working on a new system with new girls,” Wells said. “Because of graduation and injuries, we’re throwing five new girls into the system. It’s good for them to have success early and get some confidence.

“I thought Steubenville Catholic Central has made a lot of strides since last year. Their girls knew where to go and were in good positioning. We worked our system, working out of the back and working up that attacking third. Being able to get this on film and show girls open space is going to be good for us.”

With the subtractions from graduation and the injuries, one player Wells is looking at to step up in Reece Enochs.

She answered the call in a big way Saturday, scoring four times in the first half to help the Golden Bears (2-0) open a big, early lead they would not surrender.

“She had four goals in the first half, and (Friday) night she came out and had three assists and one goal,” Wells said.

“She has either led us or been one of our leaders in assists every year. She is an all-state player. She has been second-team, and we think this is the year she jumps. We had Maggie Kovalcik score a lot of goals for us, but Reece scored 34 in her freshman year, and she scored 26 last year. When you have a prolific goal-scorer like Maggie in front of you, it’s a shadow in a sense. Reece was one of the leaders in assists to Maggie.

“This is going to be a breakout year for her. She has had two really good years, and she is on pace for 100.”

Steubenville Catholic (0-2) was able to get its first two goals of the season late in the first half, pulling to within three at the break but could not sustain the momentum from it. The Golden Bears scored two quick goals back-to-back early in the second half to re-take control.

“I think we had some moments where we played very well and started to connect some passes,” first-year Catholic Central coach Jonathan Hoover said. “It’s tough against a team like Oak Glen with the number of players they have. Getting two goals, our first two goals of the season, is something we’re very happy about.

“That first 10 minutes of the second half we held them, then those two quick goals kind of took some of the momentum back away from us, and it deflated us a little bit.”

Hoover was happy with the way his team kept playing hard despite the score.

“Our girls persevered and kept fighting all the way to the end, even when we were down seven. We kept pushing, trying to get that next goal,” he said. “That is what we have talked about so far. No matter what the score is we have to keep playing for 80 minutes. I’m proud of them for continuing to play the whole game.”

The Crusaders’ goals came from Emily Vitlp and Becca Bolster. Liz Bolster had an assist.

“She did very well,” Hoover said of his keeper. “She is a special player back there. It is always hard to find someone that is aggressive back there and she was aggressive right to the very end. They could have had three or four more goals easily each half. She has made some big saves for us, and I expect her to continue to make big saves and continue to get better as the season goes on.”