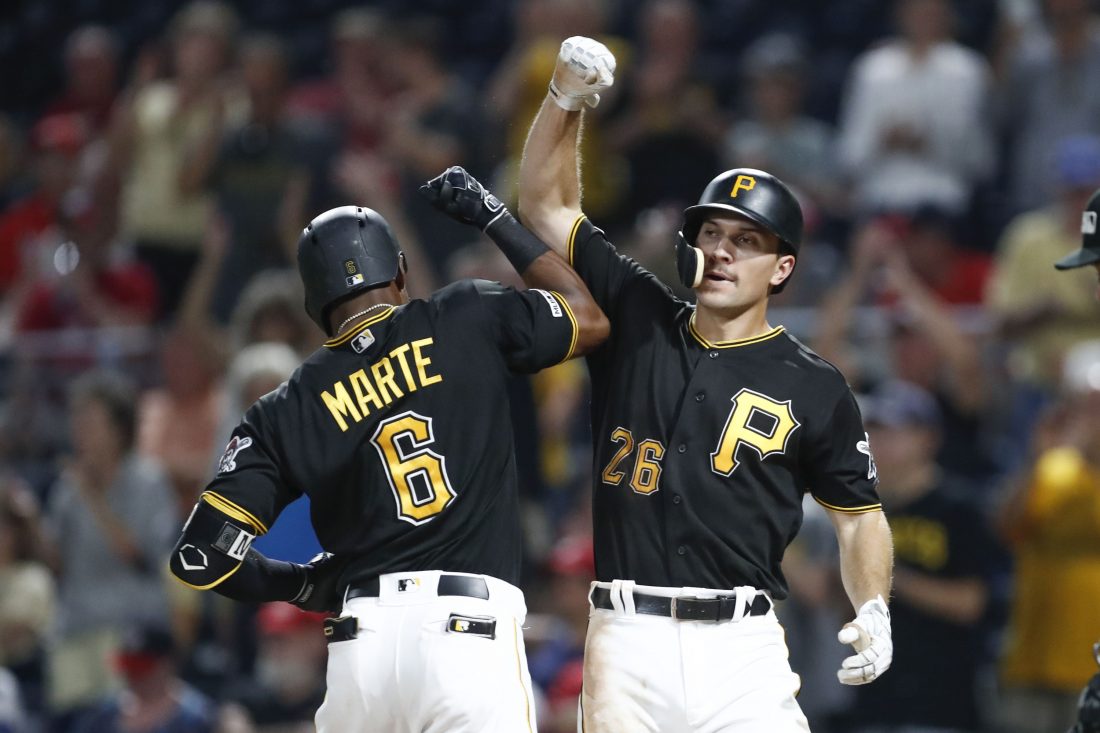 PITTSBURGH — After having little success in his first three times up, Starling Marte came up in the eighth inning with two men on base and the score tied. This time, Stephen Strasburg wasn’t on the mound and Marte took advantage.

“I’ve been doing a good job,” Marte said. “Everybody pushed me to continue to do what I do. But the season’s not over. … I have to push myself the best I can every night and try to get the support for the other guys.”

After watching Pittsburgh struggle against Strasburg through seven innings, Nationals manager Dave Martinez turned to Wander Suero (3-7) to face the left-handed bats coming up in the eighth. Adam Frazier bunted a single past the mound to load the bases with nobody out before Bryan Reynolds tied it 1-1 with a sacrifice fly.

Marte then drove a fastball from Hudson 397 feet to right-center for his 22nd homer of the season.

“(Martinez) thought it was enough,” Strasburg said. “I think we win as a team and we lose as a team. Just didn’t work out for us tonight.”

Suero, who gave up two hits and one walk, was responsible for three of Pittsburgh’s four eighth-inning runs.

“My plan was just to get the three outs that I needed to get out of the inning,” Suero said. “Unfortunately, things didn’t go the way I wanted to.”

Pittsburgh, which is 8-28 since the All-Star break, had scored one total run in its previous three games.

The Nationals are 1 1/2 games ahead of the Cubs for the NL’s first wild card, and entered having won seven of their previous eight games. They had scored at least 13 runs in each of their previous three games, totaling a franchise-record 43 runs during that stretch.

“It’s just weird, baseball,” Martinez said. “Today, we just couldn’t get any runs but one. But Strasburg was good.”

Strasburg allowed four hits and had six strikeouts in seven innings, and left the game on track for what would have been his career-high 16th win. He has 15 wins in four of his first 10 major league seasons.

Pirates reliever Clay Holmes hit Adam Eaton with a pitch before being replaced by Michael Feliz in the fifth. Anthony Rendon drove a double to the gap in right-center field off Feliz, scoring Eaton for a 1-0 Nationals lead.

Holmes gave up one run on one hit in 3 2/3 innings after relieving Pirates starter Chris Archer to start the second inning. Archer left with right shoulder discomfort after allowing two hits before stranding runners on second and third with back-to-back strikeouts to end the first.

Nationals: 1B Ryan Zimmerman continued his rehab assignment with the Potomac Nationals on Tuesday. He began the assignment by playing two games for Double-A Harrisburg after being placed on the 10-day injured list with plantar fasciitis in his right foot July 22.

Pirates: RHP Richard Rodriguez (right shoulder inflammation) was reinstated from the 10-day injured list. … RHP Montana DuRapau was optioned to Triple-A Indianapolis. … INF/OF Jose Osuna was reinstated from the MLB Suspended List after serving his five-game ban for his role in a July 30 benches-clearing brawl with the Reds. … RHP Kyle Crick was placed on the suspended list (three games) for his role in that same July 30 incident.

Pirates: RHP Joe Musgrove (8-11, 4.59) will try for his first win in August. He is 0-2 in three starts this month since last winning July 30, when he surrendered two runs in six innings against Cincinnati.

BOSTON (AP) — Aaron Nola pitched seven innings of four-hit ball to win for the sixth time in his last seven decisions, getting three runs of support in the first inning as Philadelphia cruised past Boston.

Three of the first four Philadelphia batters reached base, including back-to-back doubles by Bryce Harper and Jean Segura. Boston made it 3-2 on Jackie Bradley Jr.’s homer in the third but managed just four more hits the rest of the game.

Royals reliever Jacob Barnes (1-2) sandwiched a pair of walks around two outs before Alberto hit a 1-1 pitch into the Baltimore bullpen for his eighth home run.

Hunter Harvey (1-0) worked a perfect eighth to earn his first major league win and Mychal Givens got three outs for his 10th save.

Baltimore had lost 13 of its previous 14 games.

ARLINGTON, Texas (AP) — Delino DeShields raced home from second with the winning run in the 11th inning, giving the Texas a doubleheader split with Los Angeles after an error by first baseman Albert Pujols.

Nick Solak, who hit his first career homer earlier in the game after making his big league debut in the opener, hit a hard two-out shot that got past Pujols.

DeShields reached on a one-out single off Ty Buttrey (6-6). He stole second base after Rougned Odor struck out before Logan Forsythe walked to bring up the rookie.

Galvis, claimed off waivers from Toronto on August 12, followed Josh VanMeter’s second hit of the game with an opposite-field drive to left. It was his second home run in two nights and career-high 21st of the season.

Sonny Gray struck out 10 batters in six innings, reaching double figures for the third time this season and seventh in his career. He won his third consecutive start and improved to 4-0 in his last five outings. Gray (9-6) gave up four hits and three walks.

Freeman sent one went the opposite way in the fourth. The next inning, the Braves slugger went deep again with two outs to break a 1-1 tie, launching a pitch from Tyler Kinley (1-1) into the right-field seats for his 33rd homer of the season and second multi-homer game of the homestand.

The third Miami pitcher, Austin Brice, didn’t fare any better against Freeman, giving up a two-run single in the seventh.

Hamels (7-4) permitted three runs and five hits in his first win since June 12 at Colorado.

Murphy’s 16th homer of the season came off Jalen Beeks (5-3) after a walk to Kyle Seager.

MINNEAPOLIS (AP) — Nelson Cruz homered and drove in three runs on four hits in his second game back from a wrist injury as Minnesota beat Chicago.

Max Kepler hit a two-run homer to stay one ahead of Cruz for the team lead, starting pitcher Michael Pineda (9-5) stayed strong for seven innings, and the Twins raised their lead on Cleveland in the AL Central race to three games.

The Astros jumped on Spencer Turnbull (3-12) for six hits and five runs in three innings as he lost his eighth straight decision to remain winless since May 31.

Houston starter Aaron Sanchez didn’t get out of the third inning.

Tyler Webb (1-1) earned his first major-league victory with one-third inning of work in his 79th career game. He struck out pinch-hitter Ben Gamel.

The Cardinals have won nine of their last 11 games, while the Brewers have lost six of their last eight. St. Louis remained in first place by a half-game over the Chicago Cubs, who beat San Francisco 5-3. Third-place Milwaukee is four games back.