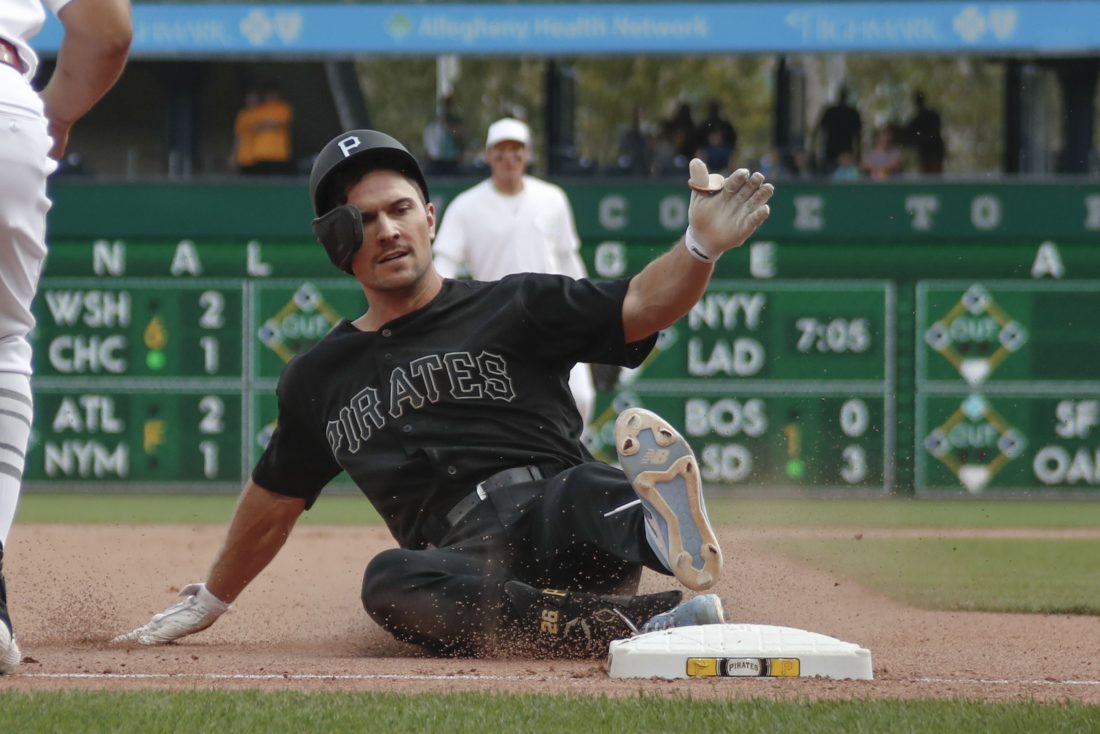 Pittsburgh Pirates' Bryan Reynolds slides into third with a triple against the Cincinnati Reds in the seventh inning of a baseball game Sunday, Aug. 25, 2019, in Pittsburgh. (AP Photo/Keith Srakocic)

PITTSBURGH — Trevor Bauer’s beginning with the Cincinnati Reds has been about as rocky as his ending with the Cleveland Indians.

Bauer allowed eight runs in three innings as the Pittsburgh Pirates beat the Reds 9-8 Sunday to sweep a three-game series.

Since being acquired from the Indians prior to the July 31 trade deadline, Bauer (10-11) is 1-3 with a 7.62 ERA in five starts. Seven of the runs charged to him Sunday were earned, and he had two walks and two strikeouts while throwing 79 pitches.

“I definitely didn’t make enough good pitches,” Bauer said. “When I did make good pitches, it didn’t go my way. A lot of weakly hit balls that end up being hits instead of outs. A couple inches here and there. Some balls on other days might be outs.”

Bauer was traded three days after throwing a ball over the center field fence in frustration in Kansas City after being removed from what ended up being his final game with Cleveland.

“Just some hits that seemed to be falling in there and not necessarily hit hard. That’s happened in a couple of his starts,” Reds manager David Bell said. “Walked a couple but seemed to be just missing a little bit. Then there’s just all kind of combined, where it can kind of get away from you a little bit. Trevor, he’s just so determined to be great. We can’t wait to see him come back out next time.”

Bryan Reynolds hit a bases-loaded triple high off the right field wall to cap a three-run second inning that put the Pirates ahead for good at 5-3. The sweep was Pittsburgh’s first since taking three from San Diego on June 21-23.

Eugenio Suarez’s leadoff home run in the ninth inning drew the Reds within a run, but Felipe Vazquez retired the last three hitters for his 23rd save in 25 opportunities.

Pirates leadoff hitter Kevin Newman went 4 for 4, was hit by a pitch and stole two bases in helping send Cincinnati to its sixth straight road loss. Pittsburgh has won 10 consecutive games at home against the Reds, dating to last season.

Pittsburgh manager Clint Hurdle moved Newman up to the top of the order at the beginning of the series.

Starling Marte’s run-scoring double with two outs in the eighth proved critical as it gave Pittsburgh a two-run lead at 9-7. Cincinnati rookie Josh VanMeter hit a two-run home run in the top of the inning that cleared the right field stands and bounced into the Allegheny River to make it a one-run game.

Kyle Farmer also homered for the Reds and Jose Iglesias had three hits.

The Pirates led 8-3 by the end of the third inning. They have scored a combined 23 runs in their last two games after being held to one run or less in five of their previous six games.

The Pirates had been 8-30 since the All-Star break prior to the series.

“We connected the dots much better,” Hurdle said. “We hit it better, we pitched it better and we caught it better.”

Reds: CF Nick Senzel (sore right thumb) did not start for a second straight game but pinch-hit in the sixth inning and struck out. … 1B Joey Votto (lower back strain) fielded ground balls but isn’t expected to be activated from the injured list for at least a few more days.

Pirates: RHP Chad Kuhl and RHP Edgar Santana, both rehabbing from Tommy John reconstructive elbow surgery, are throwing bullpens and expected to be at full strength when spring training begins in February.