Royals Stun Indians in Wild One 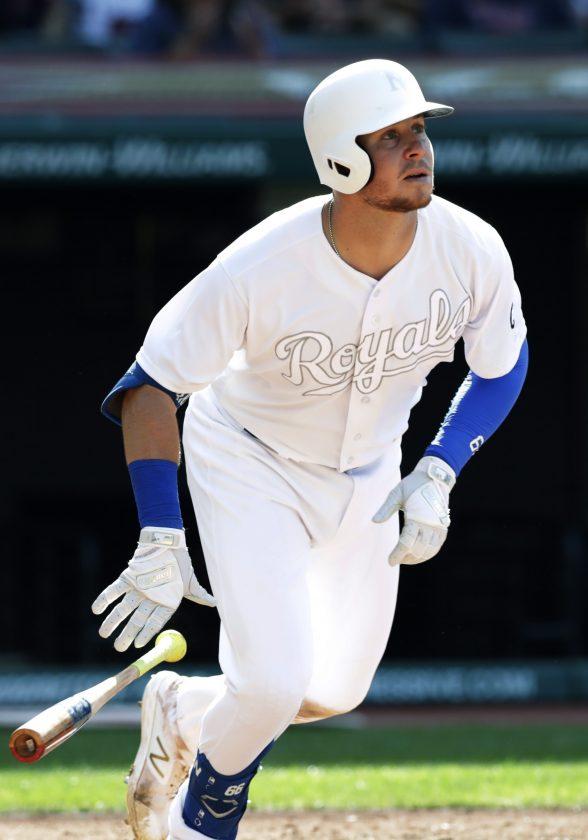 Kansas City Royals' Ryan O'Hearn watches his ball after hitting a solo home run in the 10th inning in a baseball game against the Cleveland Indians, Sunday, Aug. 25, 2019, in Cleveland. The Royals won 9-8. (AP Photo/Tony Dejak)

CLEVELAND (AP) — Ryan O’Hearn led off the 10th inning with his second homer of the game, sending Kansas City to a wild 9-8 win over the Cleveland Indians, whose playoff hopes were rocked by losing third baseman Jose Ramirez to a broken right hand.

The Indians tied it in the ninth against Ian Kennedy (1-2) on a solo homer by Francisco Lindor and Franmil Reyes’ stunning three-run shot with two outs. Reyes also homered leading off the eighth.

O’Hearn connected off Nick Goody (3-1) as the Royals salvaged a back-and-forth series finale to snap a four-game losing streak. O’Hearn also homered in the third against Indians starter Shane Bieber.

Jorge Lopez worked the 10th for his first major league save.

Losing the game was secondary to the Indians, who will be without Ramirez for their playoff push. The two-time All-Star will undergo surgery Monday in New York to repair a fractured hamate bone, and the club won’t know his recovery time until after the procedure.

CHICAGO (AP) — Anthony Rendon homered and had four hits, including an RBI single in the 11th inning, and the Washington Nationals beat the Chicago Cubs for their fifth straight victory.

Juan Soto added three hits and Stephen Strasburg struck out 10 in six innings, helping Washington finish off its first sweep of Chicago since September 2012. The Nationals outscored the Cubs 23-10 in a three-game series between the top two teams in the NL wild-card standings.

Kyle Schwarber, Addison Russell and Victor Caratini homered for Chicago, which had won five in a row before Washington rolled into town. The Cubs fell 2¢ games behind first-place St. Louis in the NL Central.

The Nationals grabbed the lead for good when Howie Kendrick scored on Tyler Chatwood’s wild pitch with Rendon at the plate in the 11th. Rendon then drove in Trea Turner with a single off Chatwood (5-2).

ST. LOUIS (AP) — Matt Carpenter broke out of his slump with a homer and three hits, Dexter Fowler drove in three runs and St. Louis cruised past Colorado after a long rain delay.

Nolan Arenado and Garrett Hampson homered for the Rockies, who have dropped six of seven. Arenado reached 100 RBIs for the fifth successive season.

Antonio Senzatela (8-8) was tagged for six runs and five hits over 1 2/3 innings in his return from the minors.

Donovan Solano added four hits and an RBI for the Giants in Bruce Bochy’s 4,000th game as a major league manager. Buster Posey struck out four times and grounded into a double play.

NEW YORK (AP) — Josh Donaldson hit two more home runs against the Mets, Dallas Keuchel pitched his best game of the season and Atlanta won its eighth in a row by holding off New York.

Braves relievers set an Atlanta record by extending their string to 25 scoreless innings before the Mets scored in the ninth. Mark Melancon got pinch-hitter Joe Panik to ground out with two on to end it.

MIAMI (AP) — Starlin Castro’s two-run double in the sixth inning capped a comeback by Miami, who rallied against Aaron Nola (12-4) to beat Philadelphia.

BALTIMORE (AP) — Anthony Santander went 5 for 5 with a homer, Renato Nunez drove in three runs and Baltimore beat Tampa Bay for a split of the four-game series.

The Yankees set a major league record for most homers in a month with 61 in August. They slugged nine in taking two of three games in a potential World Series preview to remain tied with Houston for the best record in the American League at 85-47.

Kershaw (13-3) gave up three homers for the second straight game. The three-time Cy Young Award winner allowed three runs and four hits in seven innings. He struck out a season-high 12 and walked none.

Kershaw had won 11 consecutive interleague decisions, and each of his last six decisions overall.

Ford came off the bench in the third when Yankees shortstop Didi Gregorius exited a couple of innings after getting hit by a pitch from Kershaw. Gregorius sustained a bruised right shoulder and was to have X-rays at the ballpark later.

Ford homered to extend the Yankeesá lead to 3-1 in the sixth. His RBI double to deep left field made it 4-1 in the eighth.

Judge, who wears No. 99, launched his 99th career homer in the third, snapping a 1-all tie. In the bottom half, Brett Gardner robbed Corey Seager of a potential three-run homer.

LeMahieu and Joc Pederson traded leadoff homers in the first.