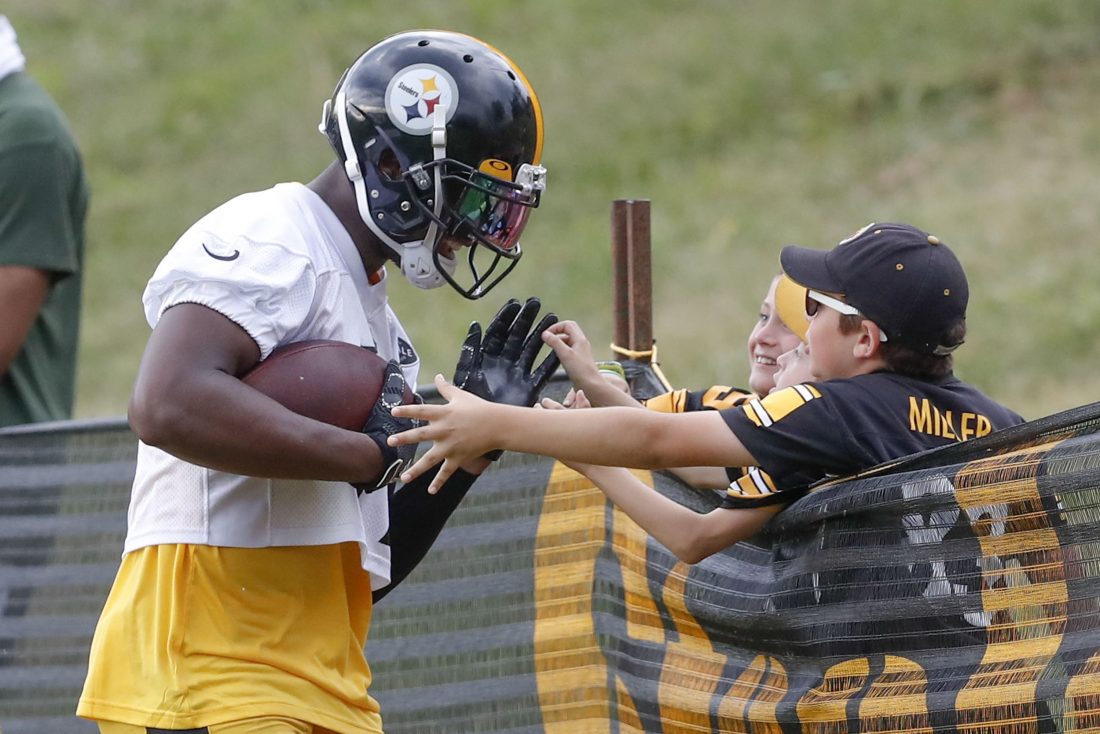 PITTSBURGH (AP) — Still a wide-smiling 22-year-old, JuJu Smith-Schuster vows not to change the youthful, fun-loving persona that helped make him one of the NFL’s most recognizable young stars by his second season.

But that doesn’t mean he lacks the wisdom to recognize that he is now a veteran, nor the self-awareness to understand there is heightened pressure to produce now that he is the unquestioned No. 1 wide receiver for the Pittsburgh Steelers.

“Obviously, all eyes are on me,” Smith-Schuster said before practice Wednesday, “and the biggest question is, ‘How are the Steelers going to be without two great players that we used to have?’ And, ‘How is JuJu going to do without AB?'”

AB, of course, is Antonio Brown, the former lead dog of the Steelers’ receivers corps who joined fellow former All Pro running back Le’Veon Bell in acrimoniously splitting from the team. Brown ultimately was traded to the Oakland Raiders.

That leaves Smith-Schuster, coming off a Pro Bowl sophomore NFL season, as the clear focal point of the Steelers’ passing game.

As Smith-Schuster alluded to, eyes across the league are on him to see if he can replicate his 111-catch, 1,426-yard 2018 he had now that Brown is not there to siphon opponents’ attention. Smith-Schuster alone figures to be the man on whom defensive coordinators devote their double-teams.

Off the field, Smith-Schuster quickly has gone from 20-year-old rookie to the Steelers’ longest continuously tenured piece of the team’s wide receivers room.

While part of his popularity among fans and likeability among teammates comes from the image of him riding his bicycle to work or getting into water balloon fights with kids, Smith-Schuster knows that even if he would have remained the youngest at his position on his team, things are different now.

“I’m still myself. I would never change that,” Smith-Schuster said. “But obviously, I have become more vocal in our receiver room.

“The amount of years playing on this team, the most experience, I fall in that category, so I can see myself being even more vocal and just being more of a leader in that room.”

Along with many teammates, Smith-Schuster had no choice but to mature when tragedy struck during training camp. Receivers coach Darryl Drake was found dead at 62 in his Saint Vincent College dormitory room earlier this month.

Addressing Drake’s death publicly for the first time since, Smith-Schuster said there’s “really no words” to describe Drake’s impact “because he was a great man in every category in life.”

Smith-Schuster was wearing two rubber bracelets he had made, one each with a quote Drake said to his players this year. “Shut out the noise” — a subtle reference to moving on without Brown — was Drake’s unofficial Steelers receivers 2019 credo. Smith-Schuster relayed Drake’s final daily inspirational saying that he passed along, too:

“‘Never choose good when great is available.’ And obviously that means don’t settle for less, don’t be satisfied for what you have now. When great is out there, go achieve it.”

That applies to Smith-Schuster, who if he can prove he can operate without Brown’s presence could elevate his league-wide status to superstar. If Smith-Schuster’s numbers improve on last season’s, there is little doubt it will.

“He’s a young guy, very energetic, he likes to fun,” new Steelers receiver Donte Moncrief, 26, said of Smith-Schuster. “But the thing about him is that at the same time, when it comes down to locking in and making plays and play ball, he’s ready. And that’s one thing I’ve learned about him, he’s ready to make plays and he’s ready to do the things people say he can’t do.”