All Eyes Are on Weir Speedster Sebastian Spencer 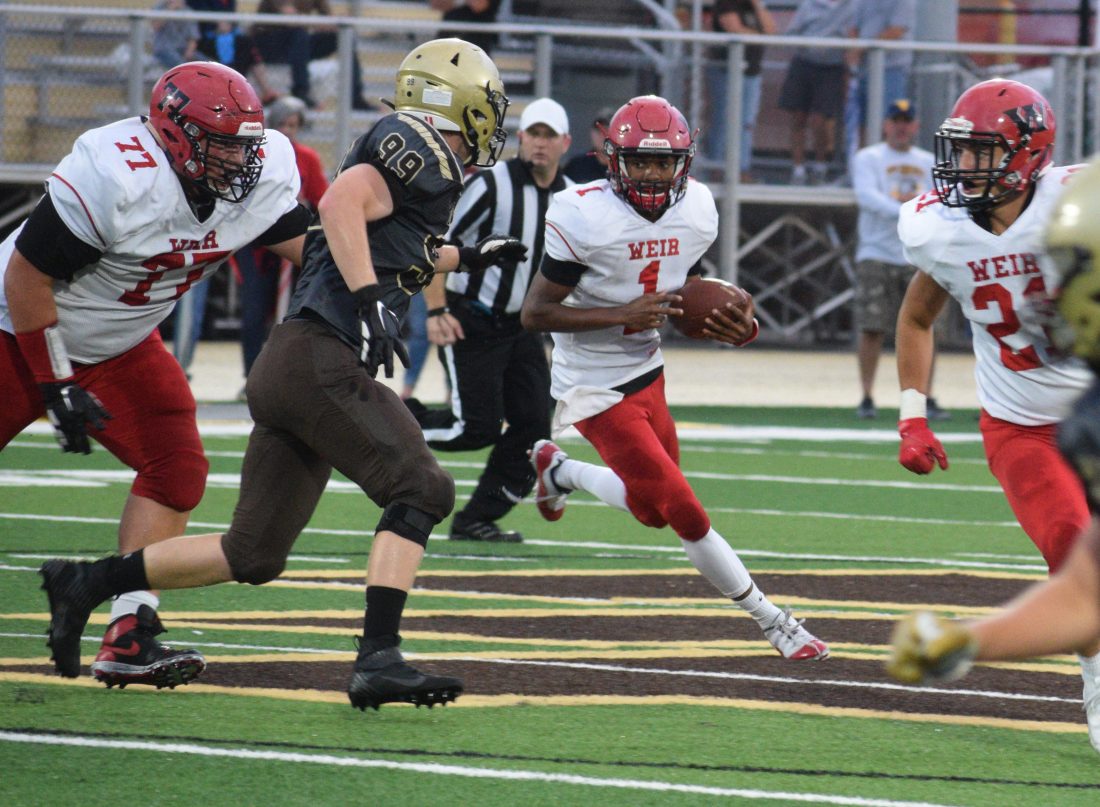 WEIRTON — Weir coach Tony Filberto wanted his team to focus on themselves following a season-opening loss at rival Oak Glen.

No one may have taken that more to heart than do-it-all Sebastian Spencer.

All eyes are on Spencer this season as Weir looks to make a return to the playoffs. The Red Riders lost a number of talented players from last season, including Tyler Komoroski (now at Army) and Donovan Kirby.

With all the weight of the world on his shoulders, Spencer had a game to forget against Oak Glen.

He fumbled the opening kickoff, which led to an Oak Glen score. He was held to 2 yards rushing on five carries and one reception for 10 yards.

“I sat at home and really thought about it, knew I had to pick up my game from last week,” Spencer said following Friday’s game against John Marshall. “Everybody said I was stopped last week, but I really think I stopped myself. (Friday) it was about picking up my game and showing everybody what I can do.”

With Weir staring down the hole of an 0-2 start, on the road against a Class AAA school, Spencer rebounded in a big way.

The Weir quarterback accounted for all four Weir touchdowns in a 28-7 rout of John Marshall at Monarch Stadium to even its record at 1-1.

He rushed for 103 yards and three touchdowns, while also passing for 64 yards and a touchdown, a 37-yard screen pass to Logan Walters for the game’s first score.

But more importantly for Spencer, it was the win that matters most.

“It feels great to get that taste out of our mouth, especially after what happened last week,” Spencer said. “We knew we had to bounce back and do it. We were going to come in guns blazing, ready to fight the whole game.

“My mind set was to just the get the ‘Dub’ and helping my team any way I can.

“On the field leadership is very important. So keeping everybody up and getting ready for this game was my main focus.”

Spencer is a dangerous weapon no matter where he is at. Whether he is lined up at quarterback, tailback, receiver or returning kicks, Spencer must be accounted for.

And Spencer seems to shine the brightest when he is being counted out. Look no further than his come-from-behind victory at the West Virginia State Track Meet in the 4×100 that made him an internet sensation.

“I am not sure yet, but I will be talking soon with my family and keeping in touch with coaches and will eventually make a decision,” Spencer said.

For now, Spencer is just focused on helping the Red Riders build off Friday’s win and return to the playoffs. Weir plays its first game of the season at Jimmy Carey Stadium this week when it hosts Frankfort (2-0).

“This game is really going to boost morale,” he said. “Last week, it wasn’t fun and everyone was quiet on the bus. Now it is going to be a good week and we are going to celebrate this win and get ready for next week.”

Players of the Week

Broughton led the offense to nine touchdowns, coincidentally, the same number Brown wore and who’s number was painted on the field at Dragon Stadium.

In a last-minute start at quarterback, Hill played nothing like a first-time starter in a tough environment against Martins Ferry.

He completed 8 of 14 passes for 131 yards, while also rushing 19 times for 101 yards and the game-winning score in a 14-13 victory against the Purple Riders.

Player of the Week

Friday’s game at Red Devils Stadium against Wheeling Park was a shootout.

The Red Devils defense stepped up when it needed to, led by Noah Truniano, a senior stalwart at linebacker who had 10 total tackles, one for loss, with an interception and a pass breakup.

∫ Brian Adkins, Fort Frye: It is usually Tyler Fisher in this space, but Friday’s game saw Adkins get in the action and he made the most of it, carrying 11 times for 176 yards and three scores in a rout of Nelsonville.

∫ Mark Rucker, Tyler Consolidated: Rucker may have been on the losing end of his battle with Doddridge County’s Hunter America, but he showed why he is in the conversation as the best tailback in the state, carrying 34 times for 213 yards in two scores.

∫ Curtis McGhee III, Jordan Waterhouse, Wheeling Central: McGhee did most of his damage with his legs, totaling 105 yards on the ground, while his backfield mate rushed eight times for 83 yards and scored three times in a victory against Steubenville Catholic.

∫ Tayveon Crawford, Steubenville: Workhorse is an understatement for this Big Red running back, who carried 40 times for 184 yards and two touchdowns, including the game-winner, in close victory against H.D. Woodson.

∫ Alex Kilburn, Monroe Central: The Seminoles are a surprising 2-0 thanks in part to a 11-carry, 139-yard effort by Kilburn, who also scored two touchdowns in a victory against Bridgeport.

∫ Ian Bush, Cameron: It wasn’t all throwing for the Dragons on Friday, as this sophomore tailback carried 16 times for 128 yards and a score

∫ Nick Chaney, Oak Glen: Chaney was nearly perfect in a rout of Philip Barbour, going 9 of 11 for 207 yards and four touchdowns.

∫ Ryan Gorman, Steubenville Catholic: Crusaders fell behind early and had to air it out against Wheeling Central as Gorman passed for 216 yards and two scores in a losing effort.

∫ Justin Frohnapfel, John Marshall: Monarchs quarterback had a rough day against the Weir defense, but still managed to throw for 117 yards and a score to Dakota Bonds.

∫ Tyler Tonkovich, St. Clairsville: Red Devils senior went 10 of 14 for 112 yards and a touchdown pass against the Patriots. He also had a rushing touchdown.

∫ Malachi Rose-Burton, Monroe Central: Seminoles QB didn’t need to throw much, but was efficient, going 5 of 7 for 104 yards and a touchdown. He also rushed for a TD.

∫ Logan Norris, Hundred: Hornets QB passed for 101 yards and a touchdown in loss to Cameron.

∫ Kobe Mitchell, Harrison Central: Huskies standout threw for 142 yards and a touchdown in the first half, before exiting Friday’s game with an injury.

∫ Caleb Leasure, Toronto: Making his season debut, Red Knights quarterback went 7 of 9 passing for 145 yards and a touchdown in a victory against Harrison Central.

∫Ayden Hannahs, Barnesville: Shamrocks QB had one of his finest games, throwing for 234 passes and four scores as Barnesville remained perfect and stunned Meadowbrook.

∫ Joshua Shorts, Brooke: Bruins got back in the win column for the first time in 12 games. Shorts threw for 286 yards and four touchdowns.

∫ Alex Meade, Gage Hannahs, Barnesville: Meade and Hannahs are proving to be capable weapons in the Shamrocks offense. In the victory against the Colts, Meade caught five passes for 132 yards and a score, while Hannahs grabbed three for 152 and two touchdowns. Meade also threw a touchdown.

∫ Gage Patterson, Hunter Patterson, Oak Glen: Gage only caught one pass, but it went for a nine-yard touchdown. He also returned a punt 55 yards for a score. Hunter led the Golden Bears in rushing (3-80) and added five catches for 95 yards, scoring touchdowns both ways.

∫ Dakota Hess, Union Local: Jets backup quarterback passed for 113 yards and a touchdown in loss to Buckeye Local. On defense, he led the team with 12.5 total tackles, including 10 solos.

∫ Wyatt Young, Monroe Central: Seminoles wideout led the team with three catches for 59 yards and a touchdown, while also returning a punt 85 yards for a score.

∫ Brennan Secrist, Madonna: Blue Dons wideout caught nine passes for 99 yards and two scores, while also returning a fumble 15 yards for what proved to be the game-winning score.

∫ Clayton Thomas, Paden City: Thomas was one of the lone bright spots for the Wildcats in a loss to Wirt County, recording 12 tackles and a sack.

∫ Tyler Smarella, Jeremy Brown. Indian Creek: Redskins duo continued their dominant play. Smarella had nine tackles, one for loss, and two pressures, while Brown had eight tackles, three for a loss, with a sack.

∫ James Stillwagoner, Logan Beegle, Mikey Hamrick, Magnolia: Blue Eagles trio did all they could against state runner-up Williamstown. Stillwagoner led the way with 14 tackles, one for loss; Beegle made 11 stops; Hamrick added 10, with four for loss.

Official stats can be sent to sports editor Josh Strope at jstrope@theintelligencer.net