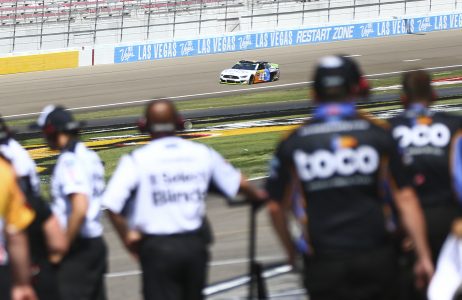 Joe Gibbs Racing, meanwhile, struggled across the board in its preparation for Sunday’s opening playoff race. While SHR put its four Fords in the top four slots, the Gibbs Toyotas qualified in the middle of the pack with Erik Jones the slowest of the 16 playoff drivers.

Gibbs as an organization is considered the favorite in NASCAR’s 10-race run to the Cup championship, and the poor qualifying Saturday was as surprising as Bowyer’s pole-winning run. Bowyer had to claw his way into the playoff field, is seeded 15th, and last won a pole 12 years ago to the day at New Hampshire.

He’d gone 431 career starts between poles, and now has three for his career.

“I did not see this coming. This is a surprise to me,” he said. “If I just sat on the pole, that car is obviously a bullet.”

The entire SHR fleet was fast, with Daniel Suarez qualifying second, followed by Kevin Harvick and Aric Almirola. Suarez is the only SHR driver not in the playoffs.

But some of the playoff participants said it will take one long run in Sunday’s race to learn if SHR is truly fast, or if the organization focused specifically on qualifying to earn valuable track position.

“It is pretty obvious when you look at the rundown of who has speed and who is dialed for handling,” said reigning series champion Joey Logano. “If the Stewart-Haas cars have both, we are all in trouble. It is a trade-off when you come to these places. It is really hard to have both. You can’t have both. You have to make your bed and lay in it.”

Kurt Busch, a Las Vegas native, qualified fifth in a Chevrolet for Chip Ganassi Racing. Chase Elliott was the next highest playoff driver at eighth in his Chevrolet for Hendrick Motorsports.

Denny Hamlin at 13th was the best of the Gibbs contingent, while Kyle Busch was 20th, Martin Truex Jr. 24th and finally Jones in 26th.

“It’s just frustrating, you hold it wide open and you hope to go fast, but it’s not where we want to be,” Jones said.

Logano qualified 22nd, four spots behind teammate and defending race winner Brad Keselowski, as Team Penske also struggled in qualifying because it placed its emphasis on handling over speed.

“We should know about 20 laps in who really has what,” Keselowski said.

Other items of note from Las Vegas:

Bubba Wallace didn’t make the playoffs but still arrived in Las Vegas in a celebratory mood. He scored a hard-fought third-place finish last weekend at Indianapolis Motor Speedway, one of the iconic tracks on the NASCAR circuit.

It was Wallace’s first top-10 finish of the season, and the result of an increase in funding of late at Richard Petty Motorsports.

“I think for our team, it’s a spotlight or a highlight of what our team can do,” Wallace said. “The funding is in place, but start getting resources out of that, start getting more cars, more people, just man hours on the car. We can do those types of things and it’s awesome to see.”

Matt DiBenedetto’s wild career swing has him in the spotlight at Las Vegas, where fans continuously stop the driver to congratulate him on his hiring this week by Wood Brothers Racing.

The turn came when Paul Menard decided to retire from full-time racing and urged the Wood organization to hire DiBenedetto, who had learned late last month he was out of a job for next season.

“The support has been crazy,” DiBenedetto said. “It’s been interesting walking around the track or at (the hotel) getting stopped, to an extreme I’m not accustomed to that at all — even walking through the garage. It’s definitely been interesting and crazy how in a couple weeks how much support you can gain and it’s amazing how much people have gravitated to this story and how much positive feedback there is in such a world where it can easily be negative.

“It’s amazing and heartwarming to see on how social media of all places, be super positive.”

Chris Buescher has failed to make the playoffs in each of his three full seasons with JTG-Daugherty Racing and now he doesn’t seem certain about his future with the team. Asked directly how contract talks are progressing on an extension to drive the No. 37 Chevrolet, he didn’t have much to offer.

“I hope everything stays on track and we can get to the point where we are good to go,” he said. “But it’s just that time of year again. It seems like more and more, it’s just a year-by-year thing for a lot of people. So, it’s just where we are at right now.”

Buescher called his contract talks “a private situation” but sounded discouraged with the pace.

“We’re going through the motions here,” he said. “We’ll know something in the next couple of weeks. It’s getting to that point.”

Buescher goes into Sunday’s race seeking his first top-10 finish of the season.