Both backs go over 100 yards in rivalry victory 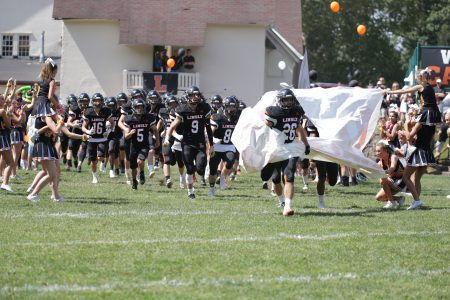 Photo by Alex Kozlowski Linsly’s Carl Nyh rushed for 169 yards and a touchdown during Saturday’s game vs. Wheeling Central.

WHEELING — Linsly coach B.J. Depew wanted to get as many running backs involved as he could during Saturday’s game against rival Wheeling Central.

He did just that.

A total of seven players carried the ball for the Cadets and two ran for over 100 yards in a 31-7 victory over the defending Class A state champions.

The seven rushers combined for 52 carries for 379 yards.

“The best part about it was the number of guys who carried the ball for us,” Depew said. “That was the plan from the start. We didn’t know if we necessarily had a standout No. 1 back but we hoped if we could get our offensive line going that we could use a variety of guys and that did come true in a big way.

“They found a way to find a crease against that tough defense.”

Leading the way for the Cadets was senior tailback Carl Nyh who rushed 14 times and amassed 169 yards and a touchdown.

“I feel like we were well prepared all week,” Nyh said. “We knew what they were doing both offensively and defensively, so we just came out ready and we wanted it.”

After rushing for only five yards in a Week 2 win over Martins Ferry, Nyh really stepped up when his team needed him the most.

“He’s an absolute workaholic,” Depew said. “He is full-speed all the time and sometimes that it is his enemy because he isn’t being patient but you never get anything but his absolute best effort.

“He was explosive (Saturday) and I’m happy for him. We’ve been waiting to see that.”

Although, he impressed with his power running and showcased his speed on a 56-yard touchdown scamper, Nyh made sure to credit his offensive linemen who paved the way all day.

“Our offensive line played great,” Nyh said. “I would’nt have had a fifth of those yards without them, so I appreciate them and they did a great job.

“I feel like they worked all summer and now we see that work paying off.”

The starters on the o-line are led by senior captain Chance Knight and include Dom Ondra, Nils Braun, Kevin Espinoza and Florian Hirsch.

Also following the bruisers up front was sophomore running back Mark Kauffman, who ran for 102 yards and a score on 17 carries.

“He’s only a sophomore but he’s amazing,” Nyh said of his teammate. “He’s bound to be great and he’s already super good. He’s a little undersized but he’ll get there.

“He’s from Germany and I come from Brazil so that’s really cool, too.”

Early in the game, junior running back Zachai Simmons went down with an injury. That’s when Depew looked to Kaufmann to rise to the occasion after getting some JV action earlier in the week.

“When we lost Zachai early in the game that made us dig a little deeper into our running back depth,” Depew said. “Marc had some opportunities and he definitely took advantage of it and took advantage of a great day by our offensive line.

“He’s a smaller guy and he’s still learning but he ran a little bit in the JV game on Monday and I think that helped him with his confidence.”

The win keeps Linsly’s unbeaten record alive as they travel to Coshocton this Friday.

“We’re 3-0 now but we have to keep moving forward and get ready for the next one,” Nyh said.

Dasyn Hores, Martins Ferry: There was no containing the Ferry standout receiver as Hores caught four touchdowns and recorded 232 yards on eight receptions.

Michael Johnson, Austin Creamer, River: Johnson raced for 210 yards and three scores, while Creamer turned in 95 yards and a score.

Garrett Dozier, Toronto: The Red Knights’ tailback gained 97 yards and a score in a win.

Noah Neely, Cameron: Neely was a big-play threat all night as he ran for 100 yards and a touchdown.

Wyatt Dallison, Valley: Dallison bullied his way through the defense to a tune of 85 yards and a touchdown.

Hunter Patterson, Oak Glen: Patterson amassed 156 yards on the ground to go with three touchdowns in another Bears’ victory.

Cole Porter, Bellaire: Porter gave Bellaire the spark it needed in a win over Harrison Central with 173 yards and two touchdowns.

Alex Burton, John Marshall: On 20 carries, Burton rushed for 95 yards and a touchdown.

Dakota Phillips, Beallsville: Phillips threw for 150 yards and a score for the Blue Devils.

Jessop Broughton, Cameron: The Dragons’ QB threw for 126 yards and two scores in a win over Valley.

Nick Chaney, Oak Glen: The Golden Bears’ gunslinger fired for 161 yards and two touchdowns in a win over Buckeye Local.

Kobe Mitchell, Harrison Central: The Huskies’ leader threw for 231 yards and a score.

Jake Probst, Martins Ferry: Probst lit up the sky with four touchdown throws and 289 yards as Martins Ferry picked up its first win of the season over Union Local.

Hunter Kelley, Linsly: Kelley launched a 51-yard TD on the team’s first offensive play of the game and threw for 135 yards in a win.

Tyler Tonkovich, St. Clairsville: The Red Devils’ quarterback passed for for a pair of scores and 137 yards in a victory.

Randy Mitchell, Steubenville: The Big Red QB tossed a pair of touchdowns and compiled 168 yards in a win.

Justin Frohnapfel, John Marshall: The Monarchs’ QB threw for 139 yards and a score in the team’s first win of the season.

Zach Stackhouse, Toronto: Stackhouse was good for 104 yards and a touchdown reception in Toronto’s victory.

Trevin Tush, Linsly: Tush found an opening in the defense and took it as he collected four receptions for 84 yards in a Linsly victory over rival Wheeling Central.

Kelly Hendershot, Shadyside: Hendershot was the top target for the Tigers as he collected 94 yards and a touchdown.

Carson Namack, Wheeling Park: Namack averaged 32 yards per reception and finished with 96 yards for the Patriots.

Gage Hannahs, Barnesville: The Hannahs connection was untouchable as Gage hauled in 10 receptions for 131 and three touchdowns from Ayden.

Sebastian Spencer, Weir: The Red Riders’ all-around athlete ran for 97 yards and three touchdowns, while passing for 89 yards in an overtime victory.

Gage Huffman, Oak Glen: Patterson picked up 95 yards and a score on the ground, while hauling in two scores and 92 yards on two catches.

Alex Dunlevy, Shaheed Jackson, Wheeling Park: The Park signalcaller fired for 221 yards and two scores, while rushing for a pair of touchdowns and 48 yards and Jackson led the team with 11 tackles and hauled in a touchdown and 70 yards.

Ayden Hannahs, Barnesville: Hannahs was all over the field as he threw for 200 yards and three touchdowns, while making seven tackles — one for a loss — and picking off a pass.

Tyler Smarella, Brandon Hiles, Indian Creek: Smarella paced the Creek defense with 11 stops — two for a loss — and a forced fumble, while Hiles provided 11 stops and a fumble recovery.

Chance Knight, Linsly: Knight made it hard on the Maroon Knights as he accumulated nine tackles — four solos and one for a loss.

Langston Hupp, John Marshall: Hupp turned in a pair of tackles for loss and forced a fumble in the Monarchs’ victory.