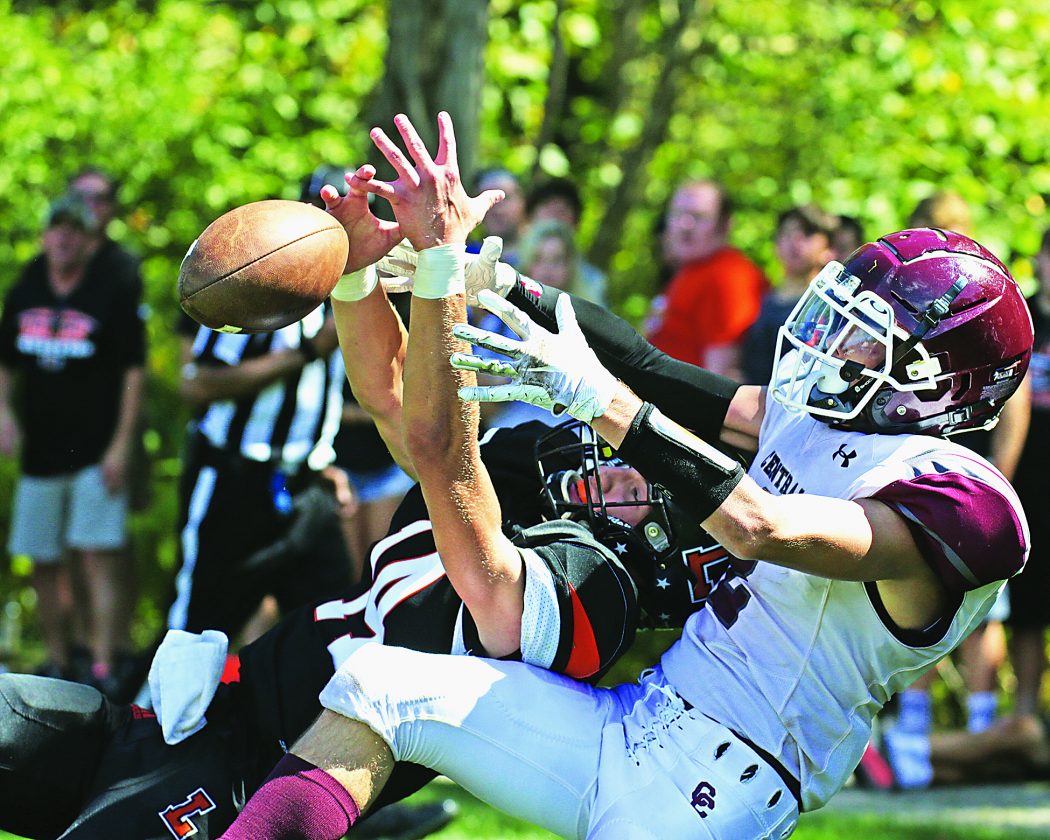 WHEELING — The week leading up to its rivalry game with Wheeling Central is always daunting for Linsly coach B.J. Depew, his coaching staff and his team.

The Cadets spent the last week hitting the practice field and the film sessions significantly hard and it showed on Saturday afternoon.

In a clash of unbeatens, Linsly controlled the line of scrimmage from start to finish in a dominating 31-7 triumph over Class A defending state champion Wheeling Central at Fawcett Field.

“It’s really intense,” Depew said of preparing for Central. “I’ll be honest, it’s not a comforting feeling when you are going to play a championship caliber team, especially in Week 3. They’ve been dominant and we’ve been coming from behind and winning by a missed extra point.

“It was a really intense week of preparation and I can honestly say that all of our coaches were very nervous just because we weren’t sure how it would all play out on the field but I give all the credit to the kids. To come out and perform the way they did — they really beat a good football team (Saturday).”

It all started up front and senior Carl Nyh followed his blockers to a tune of 167 yards and sophomore Marc Kaufmann ran for 100 as the two combined for 30 carries to lead the offensive attack.

“We’ve been really pushing those guys in practice,” Depew said of his linemen. “We knew they hadn’t played to their potential so our offensive line coach Gee Lofstead has really been doing a great job with them and getting them to believe in themselves. I couldn’t be more pleased with how our offensive line played.”

Junior quarterback Hunter Kelley came back from an injury nicely as he fired for 137 yards on 7 of 15 passing, including a 51-yard touchdown strike to senior Joe Zaccirey on the team’s first offensive play from scrimmage.

“I have to give our offensive coordinator Chris Kiedaisch a lot of credit,” Depew said. “He thought through what we had been showing on film and there was a little bit of deception involved on that play. Luckily, it worked in our favor and it was the start we were looking for.”

“They outmanned us and outmuscled us offensively and defensively up front,” Central coach Mike Young said. “That was the difference in the ballgame — how they lined it up and ran it right at us.

“They’re a physical team and they’re a good team. You put those running backs behind those 300-pounders against our 200-pounders and they’re going to win. They wore us down and credit to their scheme.”

All-state quarterback Curtis McGhee ran for 74 yards and added 64 through the air for the Knights.

“Curtis had a ton of pressure on him,” Young said. “He had to rush his passes and credit to them for how they blitzed and how they came off the line. I wish them the best and we’ll regroup and get ready for the next one.

“We have a veteran coaching staff that will support these kids like I will. We’ll get back to the drawing board and get ready for Shadyside (2-1).”

The Knights responded shortly after the Cadets’ opening score as they took advantage of a fumble recovery by all-state linebacker and two-time Huff Award winner Adam Murray in enemy territory.

McGhee found Payton Marling for a 20-yard scoring strike to even the contest.

The game remained knotted until late in the half as both teams squandered opportunities to score.

Linsly suffered from 120 penalty yards in the game and Central turned the ball over on downs twice in the first half.

“We shot ourselves in the foot twice,” Young said. “We had a chance to score twice with great field position and didn’t capitalize but that’s high school football. It just says how good they are and how good they played. They wanted to win this one.”

The Cadets broke the tie with under five minutes in the half as they drove 60 yards in 2:10 — a march that culminated in senior Trevin Tush scoring from 5 yards out.

Tush finished with five receptions and a game-high 86 yards receiving.

“Trevin is such a hard worker and an intense practice player,” Depew said. “You know he’s going to get one eventually and he did (Saturday).”

A 29-yard punt return to the Central 26 by Tush also set up the next score — a 21-yard touchdown run by Kaufmann with 3:13 on the clock that gave Linsly a 21-7 advantage at the break.

Nyh removed all doubt on the opening drive of the second half as he busted a 56-yard run for a score.

Kicker Joao Lima provided the finishing touch with a 36-yard field goal that may have been good from 50.

“For all those seniors — it means so much to them,” Depew said. “I’m happy for all of them. This is a big win for our team.”