Lutz Wins It for Saints 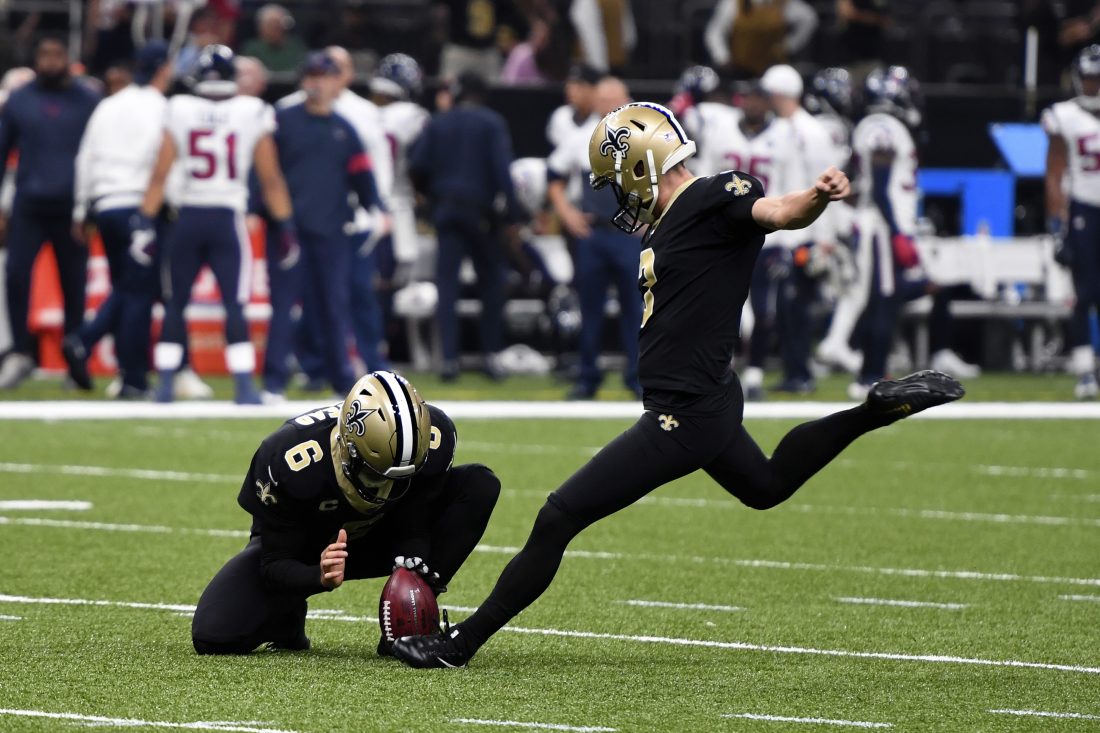 NEW ORLEANS (AP) — Wil Lutz made a 58-yard field goal as time expired, and the New Orleans Saints beat the Houston Texans 30-28 on Monday night in a game that had three scoring plays in the final minute.

“That one’s got to be a top-one moment for me,” Lutz said, adding that as much as he tries to treat each kick the same, “I got to be honest. That one felt a little different.”

New Orleans had lost their previous five season openers. And after last season ended with a bitter loss in the NFC title game, the Saints had expressed urgency in recent weeks to start the 2019 campaign off well.

“I knew how big this win would be,” Lutz said. “There was a little more weight on my shoulders on that one.”

The moment the ball left Lutz’s foot, holder Thomas Morstead appeared to know it was good, and turned toward his kicker triumphantly flexing both arms at his side. Moments later, the crowd noise in the Superdome reached an ear-splitting crescendo as the ball split the uprights and Saints players began jubilantly streaming onto the field.

Deshaun Watson threw a 37-yard touchdown pass to former Saints receiver Kenny Stills with 37 seconds left, capping a two-play, 75-yard drive that put the Texans in front after they began their final possession down by six with 50 seconds left.

But there was just enough time for Saints quarterback Drew Brees, who capped a 370-yard, two-touchdown performance by completing a 15-yard pass to Ted Ginn Jr., an 11-yarder to Michael Thomas and another pass to Ginn for 9 yards in quick succession. That allowed New Orleans to save its final timeout until just 2 seconds remained and set up Lutz’s career-long kick.

“When you have Drew as your quarterback, all I cared about was getting ready for the kick, because I knew with 37 seconds left there was going to be a chance,” Lutz said.

The 40-year-old Brees completed 32 of 43 passes. He threw one interception deep in Houston territory in the first half that could have proved costly, but did enough to make up for it.

Brees appeared to have all but sealed it when he spotted Ginn deep down field on third and 2 and connected for a 41-yard gain to the Houston 44 at the 2-minute warning. Alvin Kamara, who had 169 yards from scrimmage, followed with an 11-yard run, and the Saints ran the clock down to 55 seconds before Lutz converted a 47-yarder.

One of Brees’ TD passes went to reserve QB and utility player Taysom Hill, who also subs in as a tight end or slot receiver. Brees’ other TD went to second-year pro Tre’Quan Smith.

Watson completed 20 of 30 passes for 268 yards and three touchdowns — two of them to DeAndre Hopkins — and also ran for a 21-yard score on a fourth-down play.

JACKSONVILLE, Fla. (AP) — The Jacksonville Jaguars have acquired quarterback Josh Dobbs in a trade with Pittsburgh, giving them a backup while Nick Foles recovers from a broken collarbone.

He has played in five career NFL games, completing 6 of 12 passes for 43 yards and an interception.

He will back up rookie Gardner Minshew, who completed 22 of 25 passes for 275 yards, with two touchdowns and an interception, in his NFL debut Sunday.

Foles broke his left clavicle on the team’s 10th offensive play of the season. He was hit and landed on while throwing a 35-yard touchdown pass to DJ Chark.