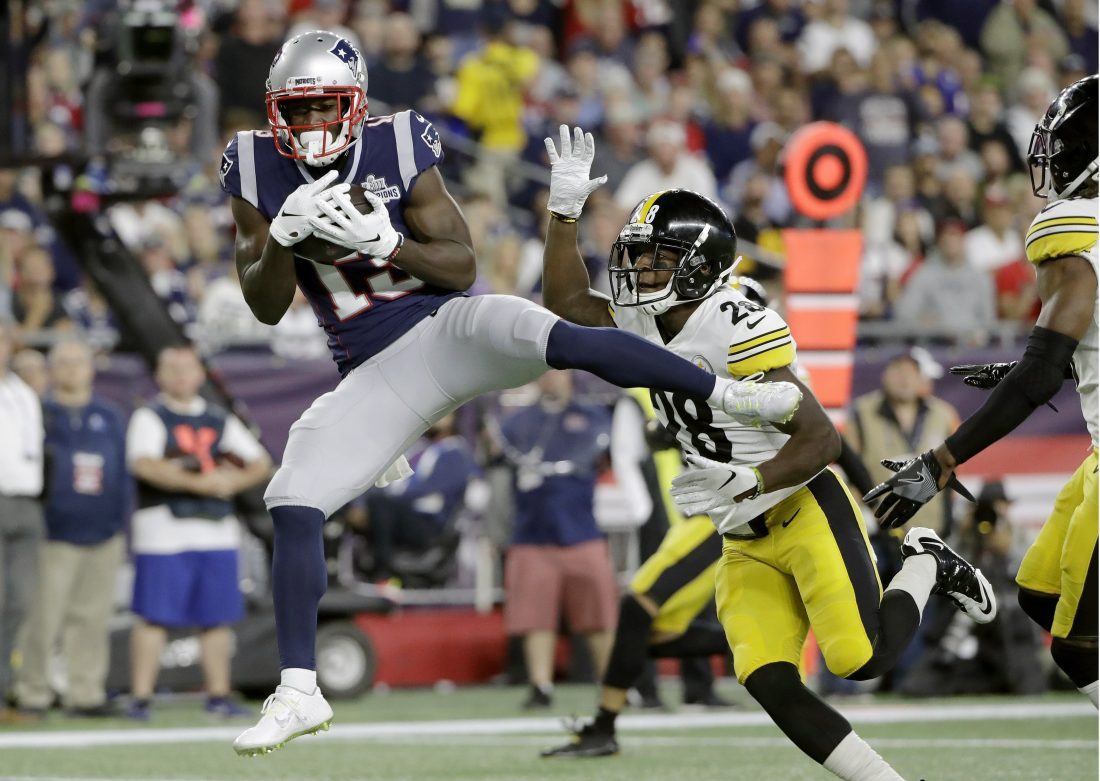 FOXBOROUGH, Mass. — The New England Patriots trolled the Pittsburgh Steelers on Saturday and then blew them out Sunday night.

A day after the acquiring former Steelers malcontent Antonio Brown, the defending Super Bowl champions showed they might not even need him, getting 341 yards and three touchdown passes from 42-year-old Tom Brady to beat Pittsburgh 33-3.

Facing the last team to beat them, the Patriots opened a 20-0 lead before Pittsburgh kicked a field goal on fourth-and-goal from the 1 with 10:17 left in the third quarter. Brady responded with a 58-yard touchdown pass to Dorsett and a 27-3 lead.

Dorsett, who will be moving down the depth chart Monday when the Patriots make Brown’s signing official, had four catches for 95 yards and the first multi-score game of his career.

Ben Roethlisberger completed 27 of 47 passes for 277 yards and an interception, with much of the production coming on non-scoring drives in garbage time. The offense showed the effects of losing two of its biggest playmakers: Brown, who talked and tweeted his way out of both Pittsburgh and Oakland in one offseason, and running back Le’Veon Bell, a two-time All-Pro who sat out all of last season to avoid a franchise tag.

In their place, James Conner gained 21 yards on 10 carries; the Steelers gained only 32 yards rushing in all. Top receiver JuJu Smith-Schuster caught six passes for 78 yards, 26 of it coming on one throw in the final six minutes with the Steelers already trailing 33-3.

The drive ended when Roethlisberger threw it into the end zone from the 41-yard line and was picked off by Devin McCourty.

The Steelers had five full possessions in the first half and punted on four of them, going three-and-out three times.

Brown, who asked for and was granted his release by Oakland on Saturday morning and then agreed to terms with the Patriots in the afternoon, and was not yet eligible to play.

There was no sign of him at the stadium. The Patriots are expected to announce on Monday the one-year deal that will guarantee the four-time All-Pro $9 million. Coach Bill Belichick declined to comment on Brown during the Patriots pregame radio show.

The Patriots made room for another Super Bowl memento above their south end zone.

The team unveiled their sixth championship banner before the game in a ceremony that included fireworks and a highlight video projected onto a screen covering much of the field.

Drew Bledsoe, Ty Law, Willie McGinest, Rob Ninkovich and Martellus Bennett brought out the first five Lombardi Trophies. Owner Robert Kraft brought out the one the team won in February by beating the Los Angeles Rams 13-3 — the one that was dented by Rob Gronkowski when he used it for batting practice at the Boston Red Sox opener.

Kraft received a big cheer from the fans, who seemed unbothered by charges that he solicited prostitution in a Florida massage parlor. Gronkowski, who retired in March, also received a loud cheer.

Steelers: Linebacker T.J. Watt left with a hip injury and did not return.