New Philly was down two scores at half 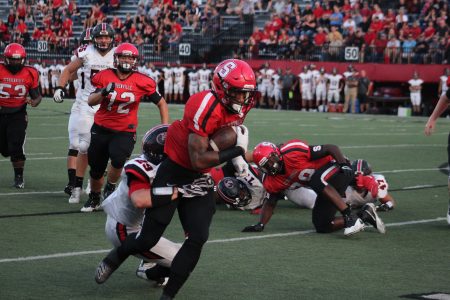 Photo by Joe Catullo Steubenville’s Tayveon Crawford carries a New Philadelphia defender with him on his way to the end zone. The Quakers stunned Big Red, 28-21.

STEUBENVILLE — Down two scores at the break, New Philadelphia reeled off 21 unanswered points to stun Steubenville, 28-21, in a battle of Division III, Region 9 contenders Friday inside Harding Stadium.

The Quakers (4-0) were bitten hard by the turnover bug in the first half, fumbling the football away three times. Big Red (3-1) turned the recoveries into touchdowns.

Tayveon Crawford accounted for all three Big Red’s scores, going 3 yards following a recovery by Isaiah McCartney, 17 after Cian Montgomery pounced on the loose pigskin and 11 yards, with Noah Howarth getting credit for the turnover.

McCartney’s recovery came on New Philadelphia’s first play from scrimmage. On his second scoring jaunt, Crawford got a huge downfield block from fellow senior Stone Biacco. The 11-yarder was a thing of beauty, as Crawford, after appearing to be stopped, squirted threw the line and raced to the house.

New Philadelphia’s lone first-half score came on a 25-yard pass from Baron May to Sam Zemis. The Quakers did threaten before the half, but the drive was stopped when Big Red’s Randy Mitchell made a nifty interception of a May aerial.

In the second half, it was Big Red that was hurt by turnovers. The Quakers made it 21-14 when May scrambled for a 9-yard score. His run came following an interception by Drew Dummermuth. Reise Meechan pulled the guests even with his 3-yard run. .

The game-winning score came on a May 1-yard plunge. It was set up by Lewis Feik’s recovery of a Big Red fumble.

Elliot Warner connected on all four of his conversion tries for New Philadelphia, while Big Red’s Jared Roberts went 3 for 3.

“That was a great win — a big program win,” New Philadelphia coach Matt Dennison said. “You know, it’s a character thing. I told our kids 99 out of 100 teams down 14 to this team in its house aren’t going to come back.

“Our kids were resilient and they fought. We talked all week about staying the course and believing in what we were doing. (Friday), our kids did it.”

May, the Eastern Michigan commit, finished with 209 yards passing (he completed 13 of his 24 attempts) and 99 yards on the ground. Zemis had five catches for 77 yards.

“That’s three games now where we didn’t do a good job of finishing,” Steubenville coach Reno Saccoccia said. “Coach Dennison has his players ready, and I didn’t have my players ready — I didn’t do my part. My players played hard for four quarters. We made a lot of mistakes (in addition to the turnovers, Big Red drew 12 flags for 85 yards), but that starts with me.

Crawford had another strong night for Big Red, rushing for 182 yards. Mitchell threw for 136 yards but was intercepted three times. Crawford and Biacco both had five receptions.

Field position also played a huge role in Big Red’s second-half scoring problems. Three of six possession started inside the 10. Two began at the 20 thanks to touchbacks on kickoffs.

“We just kept putting ourselves in bad positions,” Saccoccia said. “We made some mistakes on special teams, and those are mistakes we have to correct going forward.”