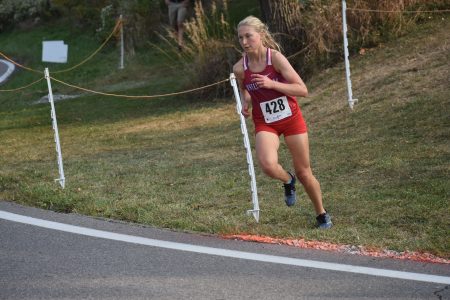 Photo by Kyle Lutz Isabella DiSaia paced the Wheeling Park girls to a second place finish Saturday at the Wheeling Park Classic. DiSaia crossed the finish line in a time of 20:06.15 good enough for fourth place. She was also the top local finisher.

WHEELING — Going into Saturday’s Wheeling Park Fall Classic, Wheeling Park cross country coach Jacob Galik knew exactly what he wanted out of his teams. Galik knew it was all about placing second on the girls side while also knowing that his boys team could make some noise this year even after losing five of his top seven runners from last year.

And the Patriots answered the call as both the boys and girls teams captured second place finishes.

Perennial power Morgantown swept the annual event as both the boys and girls teams placed first.

“We knew coming in with Morgantown being here, the race was for second place,” Wheeling Park coach Jacob Galik said about the girls race. “And I’m pleased that we got that. Linsly, JM, East Fairmont, are all quality teams. I was really curious to see how it came out. I’m glad we got that second place. Couldn’t be happier with the way Isabella DiSaia ran. We knew again the race was for fourth place. We knew Morgantown was going 1-2-3, those three girls were in the Top 5 in a major Pittsburgh race. McKenna Dunbar ran a huge race for us coming in 12th. All the girls ran really, really, really well. Really happy with them.”

DiSaia paced the Wheeling Park girls team as she crossed the finish line in a time of 20:06.15 good for fourth place. DiSaia’s strong showing comes a week after she won the Colt Carnival Invitational last week, her first individual victory. Even more impressively, her performance shows that she is back to form after seeing her junior year be cut short due to an injury.

“Last year (Isabella) lost most of her cross country season,” Galik said. “She ran a couple of races and it was actually at this race last year when we realized something just wasn’t right. She just kind of died in the last mile last year and all the color was gone from her face. We came to realize that she needed to shut it down and she did for six months. I’ve been down this road a couple of times for people who lost seasons, and people don’t always come back. It speaks to her character and it speaks to her will to be back where she is. She’s getting better every week.”

“Jacob always does a good job of putting on this meet. We had a good couple of weeks of training and some things over the last course of the last few meets we wanted to work on and we got to execute some of that (Saturday),” Morgantown coach Mike Ryan said. “I’m pretty happy with the overall performance as a team. Not just the victories, but how we did it. We kind of worked on some things on running together as a group a little bit more. We packed up earlier and we kept that throughout the race. I was really excited about that.”

Zara Zervos placed seventh in a time of 21:27.62 to round out the Top 10 and helped John Marshall to a third place team finish.

On the boys side, Galik knew his team could still compete. And his team was right there with the Mohigans. Wheeling Park placed three runners in the Top 10 while Morgantown had six.

John Marshall’s Mack Allen was the top local finisher as he claimed third place clocking in at 17:25.97.

Vincent DiProsperis was the first Patriot to cross the finish line with a time of 17:28.00 taking fourth place while Jonah Nizami placed sixth (18:02.66). Isaak Murphy was also solid for the Patriots turning in a 18:16.97 performance good for ninth.

“After losing what we lost last year with Ronnie (Saunders), C.J (Powell), Quintin (Thomas) and all those guys. We lost five out of seven and everyone expected us to be down a little bit,” Galik said. “I told the guys at the start of the year that we’re fine. And this is one of the hardest working groups I’ve ever had. The seniors lead the way. And they showed up (Saturday). Morgantown is the second or third ranked team in the state. We gave them all they wanted. We’ll see them again in a couple weeks in a bigger meet and we’ll see them again after that at Regionals. So, we’ll see and I’m excited by it.”

“If you’re going to be a good cross country team, you have to learn to run as a team,” Ryan said. “That’s something we’ve been lacking the past couple of races. We really focused on that in workouts and grouping up together in workouts. To make it second nature when you come here and you get in a meet-type scenario, that’s what we wanted to work on.”