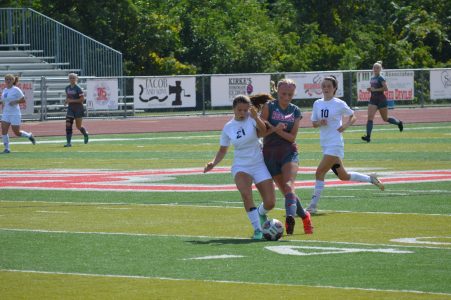 The meeting pitted the No. 2 (River View) and No. 5 (St. C.) teams in Ohio’s Eastern District for Division II.

It did not disappoint.

The match featured physical challenges, a lot of near misses and more than a few great saves from St. Clairsville’s Jaeda Nowak and her Black Bears’ counterpart, Raychel Smalley.

But in the end, it was Brenly’s low-corner shot to the right that sailed past Nowak and gave her team the win.

The call came after a Black Bears corner kick was headed toward top-shelf near post. A St. Clairsville defender instinctively put up her arms, registering a hand ball.

“It was an awful way to lose with 30 seconds to go, but that header was going in anyway and we didn’t defend it so the handball actually gave Jaeda a chance to make a save (on the penalty kick),” St. Clairsville coach Wes Stoner said.

This was the first time all season the Red Devils spent more time in their end of the field than the opposition’s.

River View featured an experienced group capable of making crisp passes and possessing the speed to run down those well-placed balls.

To the defense’s credit, the foursome that features freshmen in three of the four spots directly in front of Nowak more than held its own.

“I think they are the (second) team in our district and to be zero-zero late, I’m really pleased with our defending.”

St. Clairsville had a few chances to get one past the Bears’ keeper, but Smalley finished with five saves and the shutout. Ariel Ott had a perfect shot from the right side with less than three minutes to play. She tried to cross up the River View keeper, but her shot sailed just left of the far-side post.

“She struck it well, it was just a little wide,” Stoner saidd.

The Devils will look to regroup Tuesday as they head to Calcutta to take on Beaver Local for the Buckeye 8 Championship. Not only that, but this game could factor majorly in which team gets the first seed in the Class AAAA division for the OVAC Cup between St. C., Beaver and Oak Glen.