Steelers Look to Recover From Loss in Opener 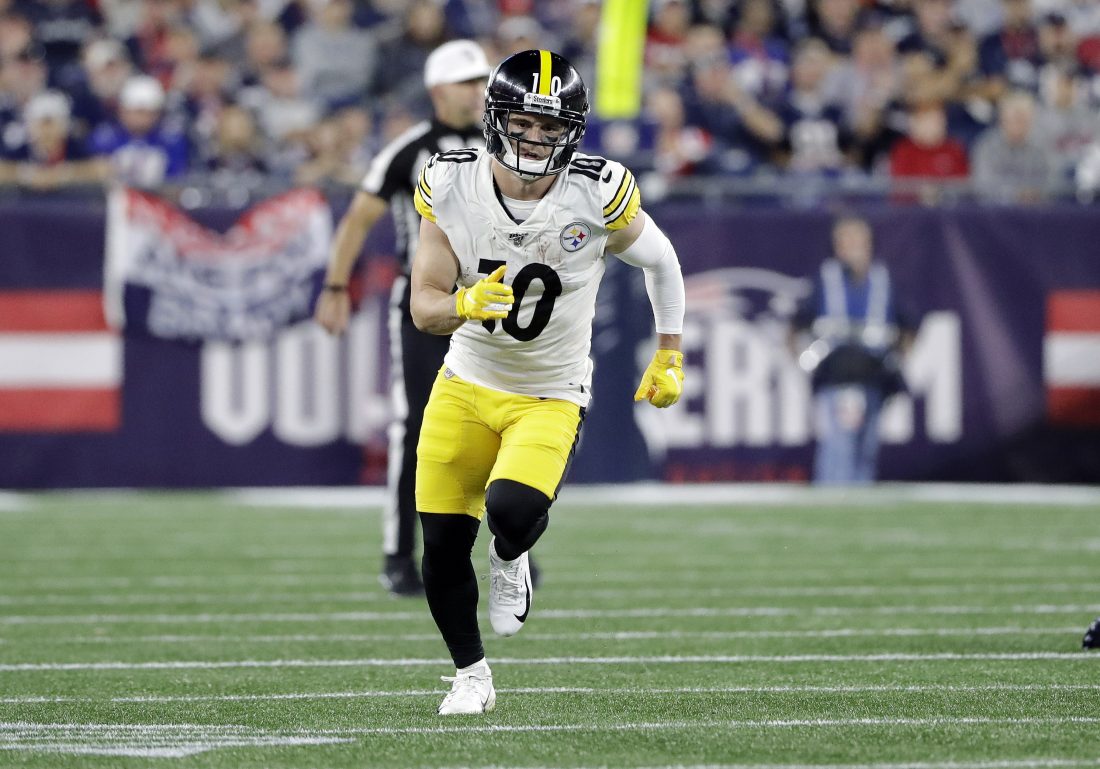 Pittsburgh Steelers wide receiver Ryan Switzer runs during a play in the second half of an NFL football game against the New England Patriots, Sunday, Sept. 8, 2019, in Foxborough, Mass. (AP Photo/Steven Senne)

PITTSBURGH (AP) — Pete Carroll watched the tape. The Seattle Seahawks coach isn’t buying what he saw from the Pittsburgh Steelers in a lopsided Week 1 loss to New England.

Maybe, but Pittsburgh (0-1) didn’t exactly look like one against the defending Super Bowl champions. The offense managed a measly field goal. The defense let 42-year-old Tom Brady do whatever he wanted whenever he wanted, just like always. Steelers coach Mike Tomlin called it the football equivalent of laying an egg.

Carroll and the Seahawks (1-0), however, remain wary. Pittsburgh’s proven plenty resilient during the long and largely successful marriage between Tomlin and quarterback Ben Roethlisberger. The Steelers are 8-1 after losses by at least 20 points during Roethlisberger’s 15-plus years in the league. Carroll doesn’t expect another clunker in Pittsburgh’s home opener, which means his team needs to play better than it did in a Week 1 victory over Cincinnati.

Seattle escaped with a 21-20 win despite getting nearly doubled up in yardage (429-233) and allowing the Bengals to hog the ball for nearly 36 minutes.

“We didn’t play the kind of game we’d like to play in the opener,” Carroll said.

Then again, neither did the Steelers. Not by a long shot. Yet Pittsburgh has started 0-2 just once in Tomlin’s dozen years on the sideline and the Seahawks haven’t scored a point in the Steel City since 1999. So the Steelers have spent the week hitting reset, eager to move hoping their season won’t be defined by another nightmarish performance in New England.

“This one counts just as much, (though) maybe not as much in terms of confidence,” guard David DeCastro said. “But you’ve got to look at it that way. Otherwise, you’d get worn down.”

Some things to look for as Seattle searches for an early signature victory while Pittsburgh will attempt to avoid falling into an early hole in what should be a very competitive AFC North.

It was eye-opening to see Andy Dalton throw for a career-high 418 yards against Seattle in the season opener. Part of Dalton’s success was because of Seattle’s game plan of allowing the Bengals to complete throws underneath. Where Seattle ran into problems were two big plays that both went for touchdowns, including a 55-yard strike to John Ross that safety Tedric Thompson badly misplayed.

Seattle isn’t expected to make any changes, other than the addition of veteran Jamar Taylor, who was signed this week. But the Seahawks know they must be better on the back end against Roethlisberger and the Steelers.

“We understand we’re playing a really good quarterback, and he probably seen the same film that they saw. So they’re going to try to attack us in the pass game,” Seattle’s Bobby Wagner said.

Brady sliced up the Steelers for 341 yards and three scores, many of his 24 completions coming on shallow crossing patterns that allowed Julian Edelman and company to have the ball in open space.

Though Seahawks quarterback Russell Wilson tends to look downfield more than Brady, Pittsburgh’s defense knows until it shows it can stop the crossing routes, they’ll keep seeing them.

“It’s a copycat league,” said nickel back Mike Hilton. “We know it’s something we need to shore up by working on our communication.”

Jadeveon Clowney had a strong debut with Seattle, playing 48 of 77 plays — more than expected — while getting a sack and deflecting a pass he nearly intercepted. Perhaps more importantly, the presence of Clowney forced Cincinnati to give him extra attention and allowed others on Seattle’s defensive line to stand out. Quinton Jefferson had the best game of any defensive lineman with six tackles and two sacks.

That pass rush could get even better for Seattle this week if Ziggy Ansah is healthy enough to play. Ansah was inactive last week after soreness developed in his surgically repaired shoulder. If Ansah plays, he’ll likely have a restricted number of plays, but it will be the first chance to see him in action with Clowney.

Seattle led the NFL in rushing last season at 160 yards per game. It was a far greater struggle in the opener as Cincinnati loaded up against Seattle’s run game and held the Seahawks to 72 yards on the ground. Part of the problem was Seattle’s inability to sustain drives and going three-and-out six times. The lack of total plays limited Chris Carson to just 15 carries and Seattle to 25 total rushes as a team. Expect the run to be a priority.

The Steelers were even worse. Pittsburgh managed just 32 yards rushing in New England, 7 of them coming on a scramble by the 37-year-old Roethlisberger. Pittsburgh will try to get the running game going without fullback Rosie Nix, who is out with a knee injury.