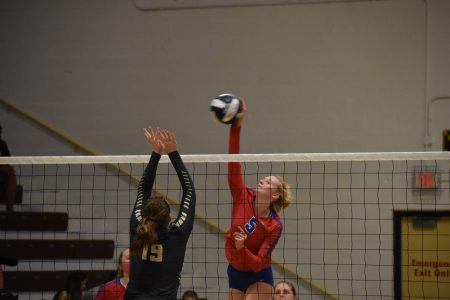 MOUNDSVILLE — Wheeling Park first-year volleyball coach Samantha Gentle has been working with her team to improve its play at the net.

That work has been paying off, especially on offense, and it showed on Monday night as the Patriots swept John Marshall 25-14, 25-21 and 26-24 at the Moundsville Fieldhouse.

“I liked that we killed the ball,” Gentle said. “The kids are hitting a lot harder than they did last year. We have three really big hitters and they are hitting as hard as they have in their entire careers.

“They have really improved. Ally and Rachel are both in their third year playing varsity so I think that has helped. They have been pretty dominant. In the last game, Ally had 27 kills. She’s been very aggressive.”

The Monarchs kept each set close but the Patriots’ strength at the net proved to be too much down the stretch.

“We expected that,” John Marshall coach Cathleen Harr said. “We scrimmaged them and we’ve seen their players and knew what they had. We expected a strong offense. I do think we were able to slow their swings down a little bit.

“Our serving and blocking did well but we are young and inexperienced as a whole but our girls have a lot of desire.”

Wheeling Park raced out to a quick 16-10 lead in the opening set and finished on a 9-4 run as Franko provided the set-ending kill to take a 1-0 upper hand.

Both teams used spurts in set No. 2 but after the Patriots rallied to knot it at 15-15, they didn’t look back as they fired shot after shot past the JM defense to capture a 2-0 advantage.

The final set was the closest. It saw eight ties, including a 24-24 deadlock.

John Marshall held a 15-12 edge midway through but the Patriots continued to battle until they knotted the score at 16-16. They didn’t trail again.

Park, later, broke the 24-24 tie and Caylin Angel blistered a serve over the net that the Monarchs couldn’t handle to wrap up the match.

“John Marshall always has a good defense,” Gentle said. “They are very scrappy. That’s one thing we needed to do was be smart where we placed the ball.

“Against our aggressive hits, they couldn’t do anything but against our pushes and our tips, they were scooping them really well. They did a good job of that.”

The Monarchs were led by senior Whitney Coffield who blasted five kills, while Lakyn Groves and Catherine Hunnell each amassed four kills.

The Patriots improve their record to 4-2 on the season as the Monarchs fall to 1-4.

“We’ve looked very good,” Gentle said. “I think we have a lot of potential and I think we should go very far this year.

“The perseverance the kids have — they don’t get down on themselves. They come together as a group and that’s what I really like.”