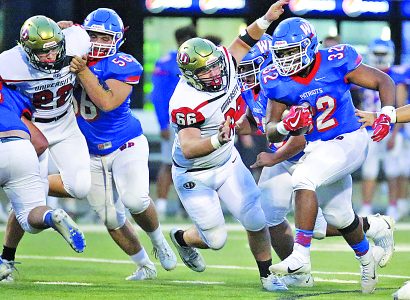 Not even a 25-minute delay to the start of Friday’s game against University could slow down Wheeling Park.

For the second successive week, the potent Patriots jumped out to a 21-0 first-quarter lead en route to a 42-6 drubbing of the youthful Hawks at Wheeling Island Stadium. The start of the game was pushed back as University was late arriving.

The win improved Park to 3-1. The Patriots have an acid test Friday at 4-0 Zanesville. University evened at 2-2.

Five different Patriots found the end zone, one coming via the defense.

Alex Dunlevy turned in another superb effort at quarterback despite playing just one series after intermission. The senior standout completed 8 of 12 passes for 219 yards and three TDs. He has 11 scoring tosses on the campaign and more than 800 yards passing.

“We have a lot of unselfish players. I am really happy with our wide receivers. They are willing to block for each other and that takes work,” Daugherty said. “They are all capable of making plays and they don’t care who gets the ball.

“Alex makes the whole thing go. He is smart and we put a lot on his table. He makes calls at the line and is makings reads. Without him I don’t know if we get it all done.”

Carson Namack, Steven Mitchell and Shaheed Jackson are the three big play Patriots wideouts. Each of the explosive juniors hauled in Dunlevy scoring passes — Namack’s covered 46 yards, Jackson’s went for 33 while Mitchell took it to the house from 65 yards out.

Rapheal Bradley supplied quality offensive balance to the Patriots attack. The hard-running 205-pound senior rushed for 108 yards and a TD on 11 totes.

Park finished with 225 yards on the ground and 235 through the air.

University, meanwhile, totaled 192 yards of offense, 172 coming on the ground. The Hawks featured three seniors and seven juniors on its 52-player roster.

“They had more size, more speed and more talent than us. They just outmanned us. They controlled the offensive and defensive lines, and when you do that you usually win,” 33-year head coach John Kelley, an Oak Glen grad said. “I thought our effort was good but we’ve got more growing pains to go through. We will have a good football team in two years.

“I really believe they (Park) will be here in December or at least in the state semifinals. It is one of the best teams Park has had since they won the state championship. The bottom line is we got beat by a great football team.”

Park scored on its second possession of the game.

Namack caught a quick Dunlevy toss and sprinted to paydirt. Andrew Glass boomed the PAT for a 7-0 Patriots lead with 6:52 left in the opening quarter.

After a punt by University, the hosts took possession at their 48. Two snaps later, Dunlevy speared Jackson for another TD. Glass made it 14-0.

Midway through the second panel, Dunlevy dumped a short pass to Mitchell. The speedy 175-pounder split the Hawks’ defense and raced 65 yards for the fourth Park TD. Glass upped it to 28-0.

The Patriots made it a 35-0 on Bradley’s two-yard scoring run with 25 seconds left in the half. Glass was again true with his conversion.

Park scored on its first possession after intermission on the strength of a 40-yard, five-play drive, capped by a one-yard run by Mitchell. Glass converted for a 42-0 advantage.

At this juncture, Daugherty allowed his reserves to play the balance of the night.

University averted the shutout on a 26-yard Eliki Barner scoring jaunt with 2:25 remaining in the game.

“Zanesville will be a big challenge for us. They have beaten some really strong teams this year.” Daugherty said. “Our key is we must stay healthy. We got out of here in pretty good shape.”