Patriots must slow down high-scoring Eagles 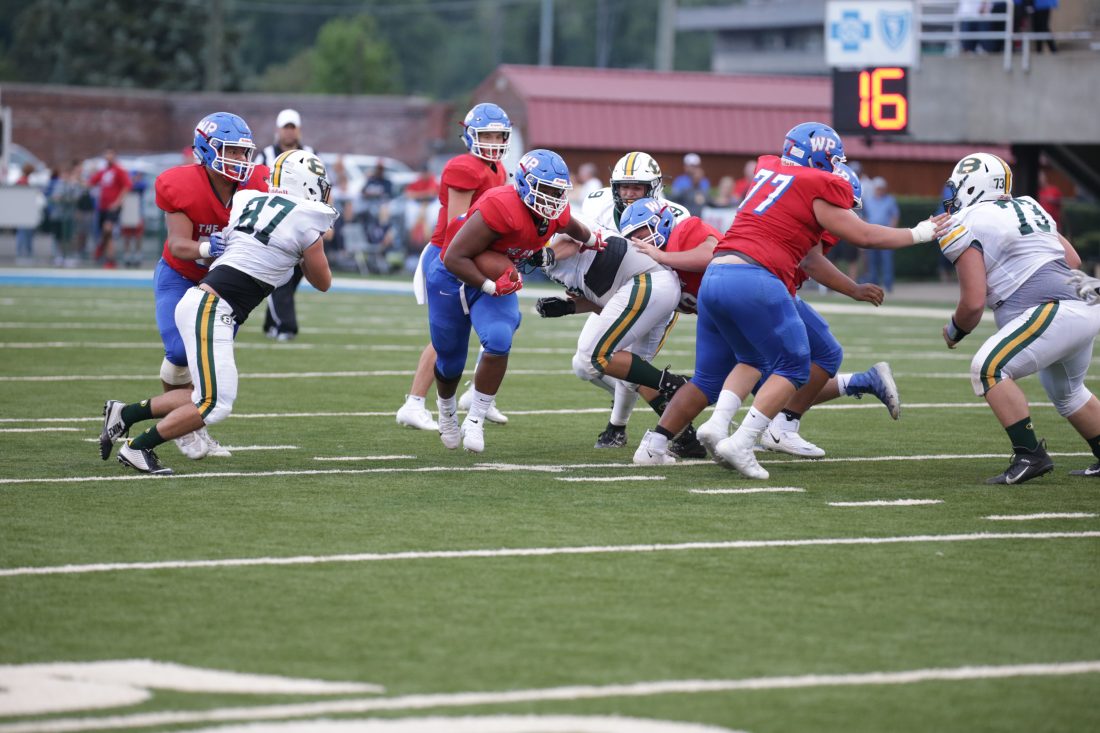 Rapheal Bradley and the Wheeling Park ground attack will look to run all over Hedgesville on Friday at Wheeling Island Stadium. Photo by Alex Kozlowski

WHEELING — Sitting at 1-1 on the young season, Wheeling Park coach Chris Daugherty watched his Patriots continually shoot themselves in the foot on offense while failing to get off the field on defense at St. Clairsville last week.

All of that resulted in a hard-to-swallow, 36-33 setback to the Red Devils, a verdict that Park look to put behind them and turn things around Friday night when Hedgesville invades Wheeling Island Stadium.

Coach Joey Yurish’s Eagles are in even worse shape after a heartbreaking 45-44 loss to visiting Brooke sent his squad to an 0-2 beginning to the campaign.

Coming into Friday night both teams have shown the ability to put points on the board with the Patriots having scored 91 points in two outings and the Eagles sitting with 74. Hedgesville, however, has allowed 79 points in a pair of close losses while Wheeling Park has surrendered 45.

“It was a hard-fought game last week,” Daugherty said. “And we had some really good momentum on both offense and defense at times at St. Clairsville, but unfortunately we weren’t able to marry the two together.

“Brett (McLean) continually went for it on fourth down and kept our offense off the field. Between that and the fact that when our defense did get stops our offense usually shot themselves in the foot we just couldn’t get any separation or maybe we could have changed things up.

“But we knew going in that it was two good football teams and either team losing was not going to be the end of the world.”

On offense the Patriots have racked up 819 total yards in two games with senior quarterback Alex Dunlevy leading the way. Dunlevy has is 31 of 48 through the air for 437 yards, six touchdowns and one interception while carrying the ball 22 times for 161 and a score.

Classmate Rapheal Bradley has carried the ball 15 times for 80 yards and three touchdowns while Dunlevy has many options in his receiving corps. Leading the group are juniors Carson Namack (7-105-td), Stevie Mitchell (7-72-td), Sincere Sinclair (6-63-2td) and Shaheed Jackson (5-95-td).

While allowing 45 points through two games, including 36 to the Red Devils, the Patriots’ stop-troops have surrendered 440 total yards of offense.

“They are very fast and big up front and they have a nice quarterback so we know this is going to be a difficult game,” Yurish said. “They are also a team that is coached very well.”

Hedgesville managed to take a late lead against the Bruins last week, only to watch the visitors score a touchdown in the final minute and celebrate while snapping an 11-game losing streak.

“We had the opportunity to be at and watch that Wheeling Park-Brooke game and felt like Brooke held their own in the first half so we knew they were improved and we were going to be in for a fight,” Yurish said.

“Both teams battled all night last week but the bottom line was the fact that they had a kicker and we did not.”

Eagles’ quarterback Owie Ash paced the offense a week ago with a touchdown pass, two scoring runs and a two-point conversion run while wide receiver Devin Heath caught a pair of scoring tosses from Ash.

“Hedgesville has a pretty good offense and they like to spread it out and run out of a lot of formations,” Daugherty said. “Their quarterback can both run and throw the football effectively and we will have to be ready for some things that we are not normally used to seeing.

“A win heals all and getting a win Friday night would be getting back on track and have us moving forward. But this is definitely a game that we are going to have to execute and not fall asleep.

“You only play 10 games so every week is important during the regular season and the deeper you get the more important they get, but you really want to get back in the win column following a loss.”

Yurish knows his team will need to be at its best to knock off the Patriots, but he is also looking forward to the opportunity.

“This trip is very exciting for our kids because most of them have never seen that part of the state before,” he said. “It gives them a chance to not only play a good football team but to see Wheeling and the island.

“I think we have the ability to handle ourselves against them and if we can go there and take care of what we need to do we will be all right.”