Work Continues at Monarch Stadium Ahead of Friday’s Game

Shuttle available for those who want to park at JMHS 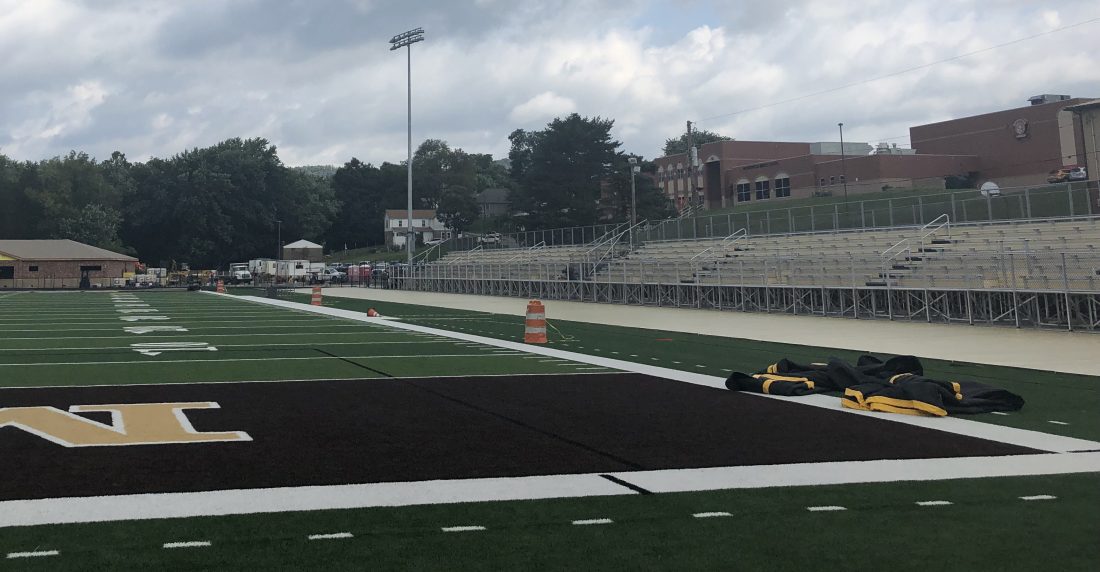 Photos by Josh Strope Monarch Stadium is nearing its completion, but there is still construction going on. Fans attending John Marshall’s home contest Friday against Weir need to be prepared when looking for parking and where to enter and exit the stadium Shown are the concession stands and locker rooms, left, and visitor’s section.

MOUNDSVILLE — Monarch Stadium is taking shape. The turf was put down last season, but as fans prepare for the upcoming campaign, new features will highlight the athletic complex.

But while the construction is under Phase 3 of its rebuild, it is yet to be complete.

That could make things tricky for fans attending Friday’s game as John Marshall opens the home portion of its schedule against Weir.

Both teams enter 0-1 after coming off road losses in their respective openers.

“We are extremely happy to have a new facility, one of the best in the valley,” John Marshall assistant principal Rob Chavanak said. “Of course everyone wants stuff done faster when it comes to construction, but we all know that doesn’t work out that way.

“(The players, coaches) have been real excited. They get to play on it, practice it a little bit. Once the track installation is done, they will get to use it a lot more.”

The biggest issue will be parking.

Limited spaces will be available behind Moundsville Middle School and the JM Field House for anyone who has a handicapped parking permit. Those patrons can enter the parking lot via Court Avenue by way of 2nd Street or 5th Street. The Route 2 stadium entrance will be restricted to shuttle buses only.

For anyone attending the game who can’t find a parking space close to the stadium, several shuttle buses will begin transporting spectators at 5:30 p.m. from the student parking lot at John Marshall High School in Glen Dale to the field. This service is free and is handicap accessible.

The shuttle will drop people off at the north ticket gate. Shuttles will start returning fans to their cars at John Marshall High School as early as the start of the third quarter.

Parking is not permitted in the lots of businesses adjacent to Monarch Stadium.

Fans can enter the facility at two locations. There are ticket booths and entrance gates located at the north end and southeast corner of the stadium.

“We are about 85 percent through with our third phase, which involves our locker room complex on the north end of the stadium, which won’t be completed until Oct. 30,” Michael Price, facilities director at Marshall County Schools, said. “We are working through operations to get restroom and concessions approved for Friday’s game. That will be ready.

“It is really exciting for the kids of Marshall County to benefit. I went to school here myself so I would have loved to have these facilities to play on. The bleachers were long overdue when it comes to being replaced. The track will be one that will play well for our sports. We are going from a six-lane track to an eight-lane track, which will make us compliant with SSAC rules to be able to hold meets and sectionals. Not to mention the synthetic turf, which is pretty much maintenance-free.”

The construction, which has been going on since June 2018, is expected to be completed around the beginning of the year. The football team played on the turf last season and soccer teams have held games there this season.

The soccer teams are being moved to their previous field behind John Marshall High School until the track, which was being laid down, is completed, roughly the beginning of October.

Red Riders fans will be the first to try out the new visitors’ bleachers, as 1,100 seats have been built along the east side of the field. Total capacity for the stadium is 4,100.

Despite all the construction, Price is making sure things will be safe for spectators.

“Parking is a challenge,” Price said. “I think most people are used to parking on the street and different neighboring facilities. We will have a shuttle and are encouraging people to park at the high school.

“Safety is the big hurdle. There is a lot of fencing off of our Route 2 entry. Unfortunately, the state didn’t get a lot of our clean-up areas done. There are still sidewalks that need to be completed and that is not going to happen until the end of September. We are putting up safety fencing and barricades for spectators to walk down into the north end. Everything else is fenced off and has safety gates in place.