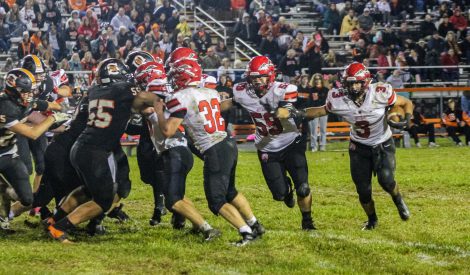 Photo by Terry Hancock Bellaire’s Cole Porter (3) gets behind the block of teammate David Lynch (59) during Friday’s game against Shadyside.

SHADYSIDE — Some wins are just sweeter than others.

Bellaire and Shadyside renewed grid acquaintances seven seasons ago. The Tigers have owned the series winning every game. That changed Friday night, however, as Coach Mark Spigarelli’s Big Reds exhibited a large dose of character and resolve in slipping past Shadyside, 12-6, at Fleming Field.

Bellaire entered the game minus starting quarterback Bob Roth, injured in last Saturday’s loss to St. Clairsville. Meanwhile, the talented Sechrest brothers — Trace and Colt — did not suit up for the Big Reds as they are sidelined for the season due to injuries.

Bellaire compensated for those three major absences thanks to the solid play of freshman quarterback Jake Heatherington, a heavy dose of Cole Porter and dominating line play.

Heatherington played more like a seasoned veteran than a freshman. The 5-foot-10, 140-pounder tossed a touchdown pass while completing 5 of 12 throws.

Porter, a 175-pound jackhammer of a running back, shouldered much of the Big Reds’ offensive burden. He carried 29 times for 140 yards, while seeing some time as a wildcat quarterback, also throwing a TD pass.

While Bellaire entered the game with a staggering injury list, Shadyside incurred two crucial injuries during the game. All-stater Kelly Hendershot and rising sophomore Mason Vannest both left the game injured in the first half and did not return.

“I told our guys all week that we had a lot of adversity hit us with Roth out, (Luke) Farmer out and the Sechrests out. But I said we are going to put a plan together and it was going to work,” an elated Spigarelli said. “I believe in my team and they believe in me. They just kept playing and playing and making plays.

“We moved some guys around on the line. We moved (Andrew) Kolenich to fullback and he was blowing guys up. We have four seniors on the offensive line and started a sophomore at center in Timmy O’Grady. He did a great job in there. We blew them off the ball pretty good. Heatherington did a great job of game-managing. He is a gamer and a winner. He likes to learn and he wants to learn. Jake wants to be the next great quarterback at Bellaire.”

The two teams battled to a 0-0 standoff at halftime.

The Tigers struck quick after intermission. The Tigers took possession of the second-half kick at their 38. On the first snap, sophomores Rhys Francis and Wyatt Reiman teamed for a 62-yard scoring connection.

Bellaire took possession of the ensuing kickoff at its 20. The Big Reds embarked on an impressive 13-play drive, capped by a 10-yard scoring pass from Porter to Trenton Wilson with 6:14 left in the third quarter. The kick failed, leaving the teams deadlocked at 6-6.

Early in the fourth period, Bellaire set up shop at the Tigers 35 following a nice A.J. McCarthy punt return and a Shadyside personal foul. Five snaps later, Heatherington and Wilson teamed up for another score, this one covering 20 yards. The run for two came up short, leaving the visitors nursing a 12-6 lead.

Shadyside did not go quietly, threatening on its final two possessions.

Porter snuffed out one drive with an interception.

The Tigers forced a punt and took possession at their 41 with 3:22 to play. Coach Mark Holenka’s crew moved to the Big Reds’ 14. A third down sack pushed the ball back to the 18. A Francis pass in the end zone to an open receiver failed to connect, preserving the Big Reds’ sixth win in eight starts.

“Give Bellaire credit. I said all week that they play very good defense even without the two Sechrests,” Holenka said. “Their line really did a great job on both sides of the ball. They play very physical.

“Heatherington was impressive. He throws the ball really well. We just made too many mistakes. We have some things to clean up.”

Heatherington passed for 96 yards. Francis completed 11 of 18 passes for 201 yards. The Big Reds limited Reiman to just 27 yards on 10 carries. He entered the game with 888 yards.

“I told our guys at halftime that if they (Shadyside) scored a touchdown just don’t let them score again. We had a lot of guys step up,” Spigarelli said. “It’s a great win to get the monkey off our back. Congratulations to our kids.

“I knew good things would come with these 20 seniors. We believe in each other. We need to forget about this and get back to work Monday.”