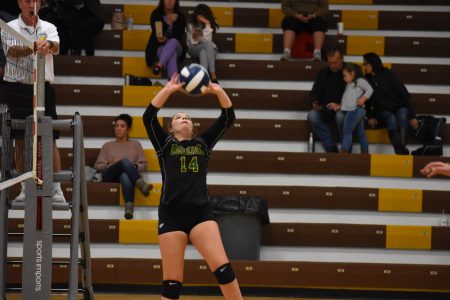 MOUNDSVILLE — With the regular season winding down and sectional rival John Marshall on the other side of the net, Brooke’s volleyball team could not have picked a better night than Thursday to play possibly its best overall game of the campaign.

Seniors Courtney Engle, Maria Kamarados, Natalie Ryan and Caitlyn Munger were all strong at the net, joined by freshman Preslei Ridgely, and the Bruins used big scoring runs in each set to sweep the Monarchs, 25-22, 25-13, 25-16, at the John Marshall Fieldhouse.

“Our senior front line was very dominant (Thursday), and while they chipped away a little with our younger girls up front, this is really the first game all season that the kids have played so strong from start to finish,” Brooke coach Lori Lynn Jackson said.

All three sets started just about the same with Brooke (7-14) scoring first, John Marshall getting even and then the Bruins using a big run to take control before the Monarchs began chipping away late.

The first set was the closest with four deadlocks and a pair of lead changes early before the visitors used a 10-2 burst to take a 14-7 lead, the biggest of the set. John Marshall managed to battle back and tie things up twice at 15-15 and 18-18 before the Bruins used a 6-1 run late to take control and held on for a 25-22 victory.

Ridgely had five of her 11 kills in the opening set, including the game-winner.

There were three ties and two lead changes featured early on in the second set before Brooke once again went on a run to take charge. With sophomore Morgan Engle serving the Bruins ran off 11 straight points to turn a 4-3 deficit into a 13-4 advantage.

Brooke’s biggest lead of the game came at 12 when Kamarados’ kill put the finishing touches on a 25-13 win and a 2-0 lead.

The final set may have been the best the Monarchs played overall, however it was also the only one the hosts never took a lead in. The score was knotted at 1-1 early but a 4-0 run put the Bruins ahead before a 9-0 blast with Ridgely serving put things away.

With Courtney Engle serving Ridgely provided the final dagger with a kill, a 25-16 final score and the sweep.

“We already know we are going to be playing John Marshall first in the sectional, so at this point of the season you want to come out and play well and beat them and we were able to do that,” Jackson said. “Our offense has been decent this season but we have had struggles on defense before (Thursday).

“There are a lot of hitters on this team and we work everyday to battle and pass. The girls really stepped up and played a total team game and I was very happy to see that.”

John Marshall coach Cathleen Harr really didn’t have the words for her team’s play Thursday other to say, “We played very flat and sometimes that’s just how it goes.”

Emily Griffith finished with 11 assists and 11 digs for the Monarchs while Ryleigh Morgan added four kills.