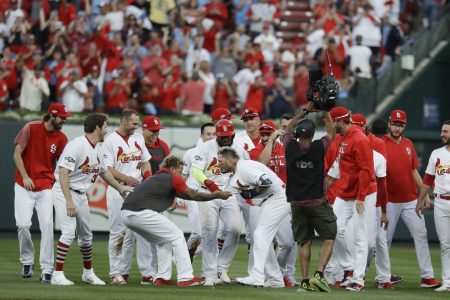 ST. LOUIS (AP) — They all knew. Every single one of them. Paul Goldschmidt and all the St. Louis Cardinals. Ozzie Albies and the rest of the Atlanta Braves.

Tough to beat Yadier Molina in a big postseason spot.

Molina pushed the Cardinals to a deciding Game 5 of the NL Division Series, poking a tying single in the eighth inning and then lifting a sacrifice fly in the 10th to beat the Braves 5-4 Monday.

Molina slung his bat far into the outfield after his winning swing, and the crowd at Busch Stadium roared with the longtime heart of the franchise.

“An elite, special player, that’s what he is,” Cardinals manager Mike Shildt said.

Game 5 will be Wednesday back in Atlanta. The Cardinals will have ace Jack Flaherty on the mound, and the Braves will go with Mike Foltynewicz.

“In front of our home fans on Wednesday a Game 5,” first baseman Freddie Freeman said. “That’s what it’s all about so we’ll be ready to go.”

Kolten Wong led off the St. Louis 10th with a ground-rule double against Julio Teheran. After Goldschmidt was intentionally walked, Wong advanced on Marcell Ozuna’s forceout and easily scampered home on Molina’s fly to the front of the warning track in left field.

Wong threw his hands in the air as he ran toward the plate. Molina rounded first base with his bat in hand, then flung it away as the celebration erupted. He discarded his batting helmet as the rest of the Cardinals poured onto the field.

“I lost it right there,” the 37-year-old catcher said. “I think I tossed the bat in the bullpen.”

Molina also made a throat-slashing gesture as he left the field. Braves star Ronald Acuna Jr. made a similar motion across the top of his chest after hauling in Molina’s flyball for the final out of Atlanta’s 3-1 win Sunday.

Before coming up with his first career game-ending RBI in the postseason, Molina tied it at 4 with a two-out single in the eighth that went just off the top of the glove of a leaping Freeman.

On this day, there was no denying the nine-time All-Star in red.

Albies homered and drove in three runs for Atlanta, and Acuna Jr. had four hits. But the NL East champions went 0 for 9 with runners in scoring position, a continuing problem in the postseason over the past two years.

WASHINGTON (AP) — Max Scherzer is 35. So is Ryan Zimmerman.

The Washington Nationals would not be headed to a win-or-go-home Game 5 in their NL Division Series against the Los Angeles Dodgers without them.

“We’re a bunch of yahoos. We’re old guys,” Scherzer joked. “Old guys can still do it.”

Sure can. And for a guy whose teams used to lose repeatedly in the postseason, Scherzer sure is delivering now.

Every time he’s pitched this October, the Nationals have won. His latest outing was a season-saving, seven-inning masterpiece that combined with Zimmerman’s three-run parabola of a homer to lift the wild-card Nationals to a victory over league-best Los Angeles, tying the best-of-five NLDS at two games apiece.

Scowling and muttering to himself as showers fell for part of his gritty performance, Scherzer allowed one run and four hits while striking out nine — and, most importantly for Washington, he prevented LA from closing out the NLDS after taking a 2-1 lead into Game 4.

Kevin Kiermaier hit a go-ahead, three-run homer as Tampa Bay teed off on Zack Greinke, and the Rays got another clutch playoff performance from Morton to beat the Houston Astros and cut their AL Division Series deficit to 2-1.

Facing the team he helped win the World Series two years ago, Morton allowed one run and three hits while striking out nine over five innings. The 35-year-old right-hander is 4-0 with an 0.95 ERA in four career elimination starts, including last week’s wild-card win at Oakland.

“It’s just what Charlie’s done all year,” manager Kevin Cash said. “He’s got that knack for doing some special things for us, and he did it again.”

Astros manager AJ Hinch announced after the game that Houston will start Justin Verlander on three days of rest in Game 4 of the best-of-five matchup at Tropicana Field on Tuesday. Tampa Bay will use Diego Castillo as an opener.

Kiermaier got the wild-card Rays going with his long home run in the second inning. Ji-Man Choi and Brandon Lowe added solo shots off Greinke, who has never won in Tampa Bay, and Willy Adames added a solo blast against Wade Miley in the sixth.

Tampa Bay’s four home runs matched a franchise record for a postseason game. The Rays also went deep four times against the Boston Red Sox during the 2008 AL Championship Series and did it again during last week’s 5-1 wild-card victory against the Athletics.

“For us to put three runs on the board, that felt great. That was huge for us,” Kiermaier said. “After that, it’s just, ‘Hey, Charlie Morton, go do your thing, go do what you do.’ And he did just that.”

Jose Altuve homered for the Astros, who are one victory away from their third straight appearance in the ALCS, and had two of Houston’s three hits off Morton. It was Altuve’s 10th career postseason home run, tied with Chase Utley for the most by a second baseman in major league history.

Morton, who won 29 games for Houston over two seasons before joining the Rays as a free agent last offseason, departed with an 8-1 lead. Four relievers finished the combined seven-hitter for the Rays, who have never been swept in a playoff series.

Now, they must avoid being “Verlandered” — a term coined by Cash after the series opener — in Game 4.

“He’s tough. We’ve got to enjoy what we accomplished today and certainly hope we can have better at-bats, production, get something going against him,” Cash said. “We’ll worry about that (Tuesday). Right now, the guys are pretty pumped about what they just did tonight.”

Verlander, who pitched seven scoreless inning to win Game 1, has only started on fewer than the standard four days of rest once. That was in the 2011 ALDS, when his first appearance was limited to one inning by rain.

“The thought process is five-game series are pretty crazy and we’ve got to win. Never know what can happen,” Verlander said. “You can’t put all your eggs in one basket and say if we lose tomorrow, we’ve got Justin and Gerrit (Cole) for Game 5. It’s a crazy game.”

The Astros won the first two games with a pair of dominating pitching performances from Verlander and Cole, who combined to limit the Rays to one unearned run and five hits with 23 strikeouts over 14 2/3 innings. Houston’s other pitchers have allowed 12 earned runs in 11 1/3 frames, an ERA of 9.53.

With Morton on the mound, and returning home for the first playoff game at Tropicana Field in six years, the Rays were confident they would find a way to get back into the series against Greinke, an 18-game winner who was 8-1 with a 3.02 in 10 starts after being acquired from Arizona at the trade deadline.

Kiermaier’s homer to right-center whipped a sellout crowd of 32,251 waving bright yellow rally towels — more than twice the 14,734 the Rays averaged during the regular season — into a frenzy. The party continued when Choi homered with two outs in the third and Lowe led off the fourth with an opposite-field shot that made it 5-1.

Morton, meanwhile, remained perfect in potential postseason elimination games, including a pair of Game 7 victories during Houston’s 2017 World Series run. He shrugged off yielding Altuve’s homer and throwing 31 pitches in the first inning to hold the Astros potent lineup in check while his offense was building a comfortable lead.

“I’ve seen this out of Charlie,” Hinch said. “When you get him early, get some opportunities early, you have to maximize them if you can. Same thing he did in the wild-card game. He settled in nicely and got them through five innings.”