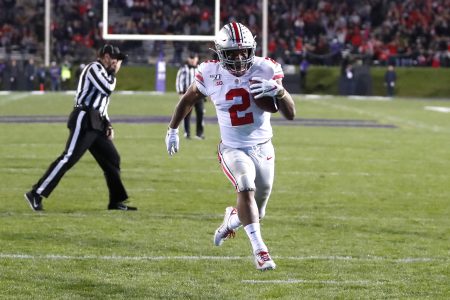 Ohio State running back J.K. Dobbins scores on a pass from quarterback Justin Fields during the first half of an NCAA college football game against Northwestern, Friday, Oct. 18, 2019, in Evanston, Ill. (AP Photo/Charles Rex Arbogast)

Fields completed 18 of 23 passes for 194 yards. The sophomore transfer from Georgia matched his career high for TDs through the air. He now has 22 passing and 30 overall on the season.

The nation’s second-leading rusher, Dobbins scored from the 5 in the second quarter after breaking off a 67-yard run. He also caught a 19-yard touchdown pass in the first half.

The junior now has 947 yards rushing after finishing with more than 1,000 in each of his first two seasons.

Chris Olave caught two TDs. Blake Haubeil kicked a 55-yard field goal that tied the second-longest in the history of the storied program.

And the Buckeyes racked up 480 yards in remaining unbeaten heading into their showdown at home with No. 6 Wisconsin next week.

The loss was the fourth in a row for Northwestern (1-5, 0-4). The Wildcats haven’t beaten a top-five opponent since the 1959 team opened with victories over No. 2 Oklahoma and No. 5 Iowa.

Aidan Smith, making his second straight start, was 6 of 20 for 42 yards and an interception. Smith and Hunter Johnson, who started the first four games before sitting out the loss at Nebraska two weeks ago because of a lower-body injury, were listed with the first team on the depth chart this week.

Through the first six games, Ohio State outscored opponents 296-53 — an average of 40.5 points that was the biggest differential among FBS schools.

The Buckeyes came in leading the Big Ten in scoring and were tops in the conference in total yards and yards per game by wide margins.

With a defense that ranked second in the nation and conference to Wisconsin going against one of the country’s worst offenses, the Buckeyes made it look easy.

Ohio State went 70 yards on the game’s opening possession, with Fields hitting a wide-open Olave down the middle for a 20-yard touchdown.

Northwestern’s Charlie Kuhbander kicked a 33-yard field goal with just over three minutes left in the first quarter. Fields made it 14-3 early in the second when he hit Dobbins on a slant. And after the Wildcats punted, the Buckeyes needed just two plays to bump the lead to 18, with Dobbins carrying the load.

Ohio State added 10 more points in the closing minutes of the half to break it open.

Ohio State: Consider this a good tuneup for the big showdown next week for the Buckeyes, who will get an extra day of rest.

Northwestern: Whether it’s Smith or Johnson starting at quarterback, the Wildcats continue to stall on offense.

SYRACUSE, N.Y. (AP) — Kenny Pickett threw for 232 yards and two touchdowns, one of them coming on a trick play to put Pittsburgh ahead for good, and the Panthers held off Syracuse for their fourth straight win.

Pittsburgh (5-2, 2-1 Atlantic Coast Conference) had won its previous three, by a combined seven points, and two of those victories came in the final minute.

This one was different until the end, with the Panthers gaining a 24-6 halftime lead and keeping the Orange at bay despite a tense final 2 minutes.

Clayton Welch hit Aaron Hackett for a 7-yard touchdown with 2:44 left to move the Orange within striking distance, and the Panthers averted a meltdown after Vincent Davis lost a fumble but was ruled down with under 2 minutes left deep in his own territory.

Knox finished with 23 carries for 220 yards and two touchdowns for the Thundering Herd (4-3, 2-1 Conference USA). His game-winning 17-yard TD run capped a 10-play, 77-yard drive and was the fourth lead change of the fourth quarter.

Marshall failed to convert the two-point attempt after Knox’s TD, but on the next play from scrimmage the Herd’s Steven Gilmore intercepted Chris Robison’s pass to secure the victory.