Wheeling Park, Bilby, Blain, Doerr all have shot at titles 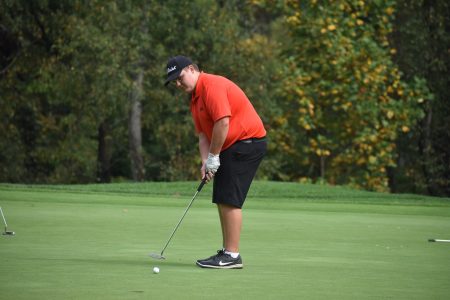 WHEELING — There is a lot of unfinished business to be handled at this year’s West Virginia High School State Golf Tournament.

Whether it is Wheeling Park looking to avenge a third place finish a season ago, Magnolia’s Trey Blain aiming to improve on his runner-up honors in 2018 or Brooke junior Ryan Bilby making his return to state after falling short at regional last year — there is plenty to watch for at Oglebay’s Jones Course today and Wednesday.

Wheeling Park secured its third straight Class AAA Region One title last week behind the efforts of juniors Noah Seivertson and James Salvatori and solid No. 3 Gavin Goodrich and No. 4 Owen Leary.

Seivertson carded a 75, Salvatori tallied an 81 and Goodrich came in with an 87.

“These guys have worked hard all year long,” Park coach Don Headley said. “They played well at the regional and I have high expectations for them (today and Wednesday). It should be an action-packed, fun-filled state tournament and we can’t wait.

“These kids have looked forward to this all year. They’ve gotten better from the first day that we played to now. I’m so happy for them that we made it and hopefully we can make some noise in the state tournament.”

Last year, Salvatori shot an overall 157 — just missing all-state accolades and Seivertson was right behind him with a 161.

This time around, both are hoping to land — not only all-state honors — but a state title as a team.

“We’re probably not the favorites to win this thing but we’re going to give it a heckuva try,” Headley said. “If one of these guys gets down and has a bad day, the other ones pick them up and play better. That’s just what we do.

“It also gives Noah and James great experience for their senior year next year.

“There are a lot of birdies at Jones and a lot of bogeys at Jones. I hope we get the birdies and the other teams get the others but anything can happen at any time.”

Bilby will also be aiming to knock in some birdies as he returns to the state tournament for the first time since his freshman year after claiming the regional title with a 71.

“He’s going to an event that is well-deserved,” Brooke coach Ron Ujcich said. “He gets to go to a Jones Course that he loves to death.

“Last year, he was disappointed. I don’t think there was anything going to stand in his way this year.”

Blain was in a similar situation as he fell to Wheeling Central’s Derrick Harrison by one stroke in 2018. This year, he’s been on a mission to take the top overall spot.

Magnolia coach Dave Tallman thinks he can do just that if he hits his putts.

“I really think he needs to sink his putts,” Tallman said. “If he does that I think he has a shot at winning it.”

Perhaps a rainy Sunday and Monday will slow down the greens at Jones, making conditions ideal for the Magnolia senior.

“I think the rain is going to help slow the greens down for his putts,” Tallman said. “He hits the ball so far. I think it’s going to be like target practice (Tuesday) as far as hitting the ball at the pin. This course really suits his game.”

The field is wide open this year in Class AAA as defending champion George Washington and its defending individual medalist, Joseph Kalaskey, failed to make it out of the regional.

Kalaskey filed a lawsuit in hopes of being added as a third team from Class AAA Region 3 after a debate over a golfer from Capital’s final score at the regional tournament. Capital edged GW by one shot.

It was ruled on Monday by Chief Kanawha Circuit Judge Joanna Tabit that GW would not be participating in this year’s state tournament.