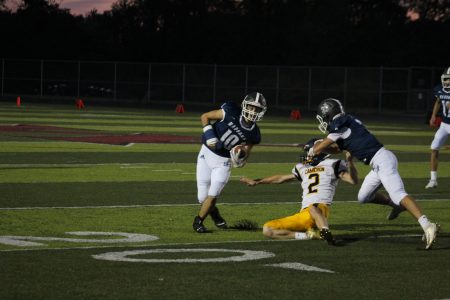 Photo by Joe Catullo After starting 5-1, Thomas Sessi (10) and Angelo Quattrochi look to help Madonna secure a playoff spot in W.Va. Class A.

WHEELING — When they say the regular season for high school football is the fastest 10 weeks, it’s no exaggeration. Around 10 p.m. on Friday, Week 7 will commence and three weeks will be left as a handful of West Virgina teams in the Ohio Valley Athletic Conference look to make one final push towards the WVSSAC playoffs.

In Class AAA, Wheeling Park also has started the season in solid fashion.

With its lone loss coming to St. Clairsville, (36-33). Last week Wheeling Park had its bye, a week after an impressive come-from-behind victory against Zanesville when it was down 21-0. Wheeling Park will face a rebuilding Morgantown this week.

The Patriots will have a tough road in their final four weeks as they will face Musselman in Week 8 and Parkersburg South Week 10 before facing arch-rival John Marshall in the regular season finale.

Wheeling Park was ranked fifth last week in the WVSSAC ratings. The new ratings will be released at 2 p.m. today.

Parkersburg South has been near perfect all season. The Patriots pulled off a huge victory against Huntington last week to improve their record to 6-0. In last week’s WVSSAC ratings, Parkersburg South sat at No. 3 behind Cabell Midland and Martinsburg.

With all three getting victories there, not much should change when the ratings are released.

One of the stories this year has to be Oak Glen. The Golden Bears have already had a historical season and their 6-0 start is the best start in school history. They also beat their rival Weir for the first time since 2012 in Week 1. It’s most impressive victory came against East Liverpool, where they had to face some adversity going into the fourth quarter and were down the majority of the game, a situation they had not seen all year. Oak Glen will be put to the test again as a strong 5-1 Toronto team comes to New Cumberland on Friday for the Golden Bears’ final home game this year. Going into Week 6, the Golden Bears were ranked fifth in the WVSSAC ratings.

After dropping a tough game to Plum (Pa.), Weir will most likely be on the outside looking in as it was ranked 15th in the standings last week.

The Red Riders’ schedule doesn’t get any easier this week as they will face top-ranked Fairmont Senior.

After falling for the second time this season, (a 42-0 blowout to Fort Frye), the last thing that Wheeling Central is doing right now is panicking. And why should it? The Maroon Knights are still the best team in Class A. While they will drop in the SSAC ratings this week, they will have more than enough time to make up some ground.

After its bye this week, the Maroon Knights will have a couple tough Ohio teams to face, who will also be looking to clinch a playoff spot, in Martins Ferry, (Week 8) and St. Clairsville (Week 10).

After missing out on the playoffs last year, Madonna has put itself in a good position to return this season. Sitting with a record of 5-1, the Blue Dons’ most recent game was a solid 32-6 victory over Trinity. The Blue Dons’ remaing foes are Beallsville, Toronto, Steubenville Catholic and Conotton Valley. Last week, Madonna was ranked 11th in the ratings.

Big Red bruiser carried the load as he took 36 handoffs and raced for 317 yards and three touchdowns in an impressive victory on the road at Dover.

Defensive stalwart led the way with 12.5 tackles, including a sack and recovering a fumble a Silver Knights victory.

∫ Zane Wallace, Tyler Fisher, Fort Frye: Cadets rushing duo showed just how talented they are by piling up big numbers against one of the best defensive fronts in the valley. Against Wheeling Central, Fisher carried 15 times for 116 yards and three touchdowns, while backfield mate Wallace rushed 18 times for 180 yards and a score.

∫ Mark Rucker, Tyler Consolidated: All-stater continues to be a workhorse and pile up the numbers with 18 carries for 274 yards and three touchdowns as the Silver Knights topped Wirt County. He also had two receiving touchdows.

∫ Cayden Williams, Bridgeport: Bulldogs tailback had his best game of the season, rushing for 157 yards and a touchdown.

∫ Steven Felton, Linsly: Cadets back bulled his way to three touchdowns and rushed for 95 yards in a victory against Allderdice.

∫ Aaron Jordan, St. Clairsville: Senior running back toted the ball 27 times for 237 yards and a score in a loss to Harrison Central.

∫ Jaksan Price, Union Local: Jets back rushed 24 times for 111 yards and a touchdown in a loss to Meadowbrook.

∫ Wyatt Reiman, Shadyside: Tigers celebrated 100 years in style thanks to Reiman, who rushed 27 times for 179 yards and four touchdowns in a rout of River.

∫ Trevor Fante, Indian Creek: No dramatic victory this week for Indian Creek as it put Brooke away early behind 106 yards and three touchdowns on 11 carries from its senior tailback.

∫ Silas McKeever, Magnolia: Tailback provided 103 yards on the ground and a score.

∫ Bobby Roth, Bellaire: Big Reds QB finished with an even 100 yards and a touchdown pass in a balanced victory against Beaver Local.

∫ Ayden Hall, Dover: Tornadoes quarterback launched a pair of touchdowns and completed 16 of 35 passes for 284 yards in a loss to Steubenville.

∫ Kobe Mitchell, Harrison Central: Huskies QB showcased all of his skills with 77 rushing yards and two touchdowns and 365 yards passing and four scores in an upset victory over St. Clairsville.

∫ Brandon Penn, Parkersburg South: Kennedy Award candidate led his team to a huge win over Huntington, rushing 25 times for 156 yards, while also throwing for 156 yards and a touchdown. He also added 10 tackles.

∫ Alex Meade, Ayden Hannahs, Barnesville: Meade racked up 133 yards receiving and a touchdown, while tacking on six tackles, a sack, a blocked punt and a forced fumble. Hannahs garnered 224 yards passing and a pair of touchdowns, while supplying 10 tackles and recovering a fumble.

∫ Nick Woodyard, East Liverpool: Potters’ passer threw for 191 yards and a touchdown, while running for 112 yards on 20 carries.

∫ Bailey Serevicz, Brooke: Blasted a 25-yard field goal through the uprights to become the first female in school history to make a field goal at Brooke.

∫ Braxton Amos, Parkersburg South: Patriots defender knows a little something about wrestling someone to the ground. The nationally ranked wrestler totalled 13 tackles against the Highlanders. He also recovered a fumble.