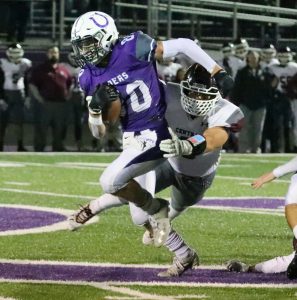 MARTINS FERRY — Chas Yoder talked all week about wanting to establish a more consistent running game and sending his seniors out on a high note in their home finale.

“We wanted to send our seniors out the right way and those guys made some big plays, but our young guys contributed, too,” Yoder said. “Those younger guys knew what this game meant to those older guys. Overall, it was a great team effort.”

All told, the Riders, who are 4-4 entering a road trip to Beaver Local in Week 9, were extremely balanced on offense to a tune of 437 yards with 231 coming on the ground.

“We knew we had to establish a running game,” Yoder said. “Our line has been playing really well the last few weeks, so it was on our backs and they all ran with their pads down and ran great.”

If the offensive balance wasn’t enough, the Riders wasted no time in setting the tone either. Senior Jacob Probst and classmate Dasyn Hores connected for a 72-yard touchdown on the very first play from scrimmage.

Five plays later, the Riders were in the end zone. Probst found Logan Smith for a 5-yard touchdown on a slant route. The PAT was blocked, leaving the Purple Riders with a 13-0 lead just 2:22 into the game.

“We have the potential to do that,” Yoder said of the quick start. “We made more plays than we missed, which is always a key. Wheeling Central is a good team and overall we played very well.”

Things went from bad to worse for the Maroon Knights. After being forced to punt, McGhee was tangled up in a defensive play and clutched his knee. He was helped from the field and didn’t return.

“From the very beginning, we were up against it,” Young said. “I never felt we were out of it, but when (McGhee) went down it changed our entire game plan, momentum, etc. But, we still felt like we were in the game.”

The Maroon Knights made it a one-score game thanks to Jalen Creighton, who stepped in front of a Probst pass and raced it 29 yards to paydirt. Jacob Rine was true on the PAT, making it 13-7 late in the first.

The Maroon Knights, who threw for 10 yards, endured another quick three-and-out a couple of possessions later and the Purple Riders responded by extending their lead. Ferry marched 63 yards in 5:35, needing 12 plays. Probst found hard-nosed running back Chase Goff on a little dump off. Goff proceeded to shed no fewer than three would-be Maroon Knight tacklers en route to the 10-yard touchdown.

“Our tackling is atrocious … it’s just not good,” Young said. “You can blame that on whatever you want, whether it be coaching or the kids. It just comes down to you have to block and tackle. We spent more time working on tackling than we did in the entire preseason because we saw that was our weakest link. Give credit to Martins Ferry because they played hard and aggressive.”

With two minutes to go in the third, the Riders extended the margin to three scores. Caleb Olson, who finished with 67 yards on the ground, raced around the end for a 10-yard touchdown.

Wheeling Central’s offense without McGhee struggled mightily. It finished with 160 yards. One of the few bright spots was the running of Jordan Waterhouse, who had 105 yards and a touchdown on 16 carries.

Young wouldn’t speculate on McGhee’s injury, but said, “it doesn’t look good at all.”

“He’s probably going to be out a while,” Young said.

Probst finished a solid 10 of 16 passing for 206 yards and the three touchdowns. The backfield by committee saw Goff, Olson and Trevor Hanson all get at least 10 carries. Goff led the trio with 92.