Morgantown Next Up For Wheeling Park

Patriots coming off their bye week 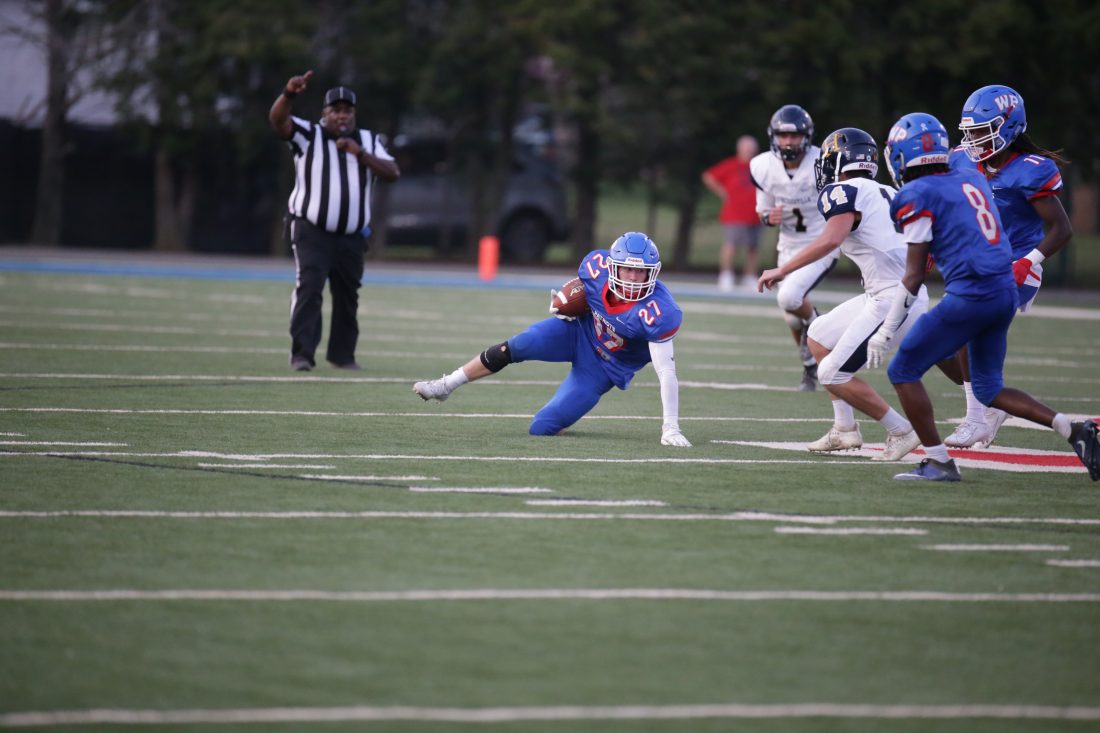 Photo by Alex Kozlowski Andrew Shelek and Wheeling Park are coming off a bye week. The Patriots will meet Morgantown tonight.

MORGANTOWN — It has been one of those seasons for Coach Matt Lacy and his Morgantown football team as injuries and a daunting schedule have led to stumbling out of the gate with a 1-5 record with no relief in sight.

A week after chasing Kennedy Award candidate Blake Hartman of Musselman up and down the field all night in a 35-0 setback, things are not going to get much easier for the Mohigans with senior quarterback Alex Dunlevy and Wheeling Park set to pay a visit to Pony Lewis Field tonight.

Coach Chris Daugherty’s Patriots (4-1) are coming off a bye week and are two weeks removed from a thrilling 35-34 comeback victory over Ohio big-school power Zanesville.

“You never know how your team is going to handle the bye week, but we were a little banged up and it gave us a chance to heal up a little bit,” Daugherty said. “You just hope you don’t go into your next game having to shake the rust off of things in the first quarter.

“It felt like we had a pretty good off week coming off a game that was exactly what were thought it was going to be. We took Zanesville’s best shot and were lucky enough to have the ball last and finish it off. What a great football game that was.”

Wheeling Park will be heading to Morgantown to take on a Mohigans squad that has plenty of athletes on the field, but is still transitioning heading into the second half of the season.

Lacy made a change at quarterback three weeks ago, moving starter Cam Rice to a multi-purpose role on offense while inserting senior Gunner Lattimore. Since that time Rice has sustained a knee injury that will cost him the remainder of his junior campaign while Lattimore is coming off a rough night under center at Musselman.

Senior Preston Fox is Morgantown’s main man in the receiving corps and is always dangerous with 20-plus catches for more than 350 yards and two touchdowns. The Mohigans have a pair of capable running backs in seniors Quin Thompson and Jace Whetsell, who are both near 400 yards on the ground and have combined for seven scores. If needed Lacy has a more than capable kicker to call upon in junior John McConnell, who has booted 17 extra-points and a pair of field goals.

On the defensive side Morgantown allowed scoring runs of 75, 87 and 97 yards last week.

“This is always a big game for us, and we never expect anything but Morgantown’s best shot,” Daugherty said. “Their record does not reflect how good they really are. This is a game that we always circle on our schedule and I am sure they probably do as well.”

They Patriots like to distribute the ball and use all of their options on offense, but everything starts with Dunlevy and his ability to carve up defenses with his arm and his legs.

Dunlevy, who threw a game-winning touchdown pass to junior Carson Namack with 48 seconds to play against Zanesville, has completed 65 of 99 passes for 1,072 yards, 13 touchdowns and two interceptions on the season. The senior do-it-all has also carried the ball 43 times for 292 yards and five scores.

Senior Rapheal Bradley is the Patriots’ leading rusher with 390 yards and five touchdowns on 49 carries while Namack is joined in the receiving corps by Stevie Mitchell, Sincere Sinclair and Xavier Morris.

“We preached all summer long that we wanted to be an unselfish football team,” Daugherty said. “If one guy has a great game it might be someone else having a great game the next week and that is what it has turned into.

“These kids have stayed humble and selfless and Alex has done a great job getting the ball to the right places at the right times. It has been a super half a season for him and this team and we are just hoping it can continue.

“Another thing is that our defense has grown by leaps and bounds the last couple of games and we are finding out who are leaders are. I know we gave up 34 points in our last game, but the defense made big stops when it needed to that helped set up that win.”

Park also has a kicking threat in junior Andrew Glass, who has kicked 24 PATs, including the eventual game-winner against the Blue Devils.

Daugherty’s offense has scored at least 33 points in each of its five games, including the team’s only loss, a 36-33 setback at St. Clairsville. Meanwhile, the defense has allowed at least 34 twice.

“This is always a big game for us,” Lacy said, in echoing what Daugherty had mentioned. “Wheeling Park is a very good football team that is quick on both offense and defense and really flies around the field. They do a lot of really good things.

“The (Blake) Hartman kid we played last week is real good but we feel like Alex Dunlevy is every bit as good as he is. Our defense is going to see more of the same thing this week. They have a quarterback pipeline running through Wheeling Park right now, it has been phenomenal the kids they have had in the last six or seven years.

“We know that things haven’t gone our way this season, but we still want to be competitive. Some people have asked about a youth movement but we have seniors that have worked way too hard and put in too much time to not play. It is our Senior Night this week and we are going to continue to celebrate those kids and we just want to have fun and do things the right way.”

The two teams have split their last two meetings with blowout victories. Wheeling Park posted a 31-0 verdict last season while Morgantown defeated the Patriots 28-3 in 2017.

Last week’s bye week will also help the Patriots prepare for the second half of the season which includes big games against Musselman, Parkersburg South and arch-rival John Marshall.