Former Cyclone scores goal in his return to Cincinnati 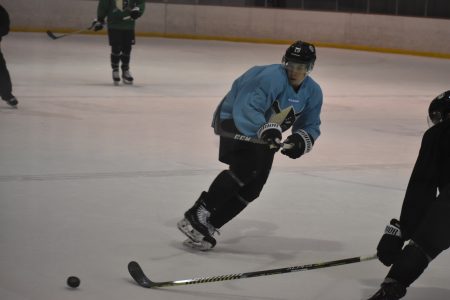 Photo by Cody Tomer Wheeling’s Myles Powell netted the team’s first goal of the season last weekend in a game against his former team in Cincinnati.

WHEELING — It was a familiar walk for Myles Powell into U.S. Bank Arena in Cincinnati last weekend for the season opener but this time he was heading to the visitors locker room.

Powell, who spent his rookie campaign with the Cyclones, earned ECHL All-Rookie Team honors last season with 31 goals and 35 assists and kicked off this season in the place where it all began.

“I saw a lot of familiar faces,” Powell said of his return to Cincinnati. “It was sort of surreal getting back there. It was cool seeing a lot of guys I knew on the team and the coaching staff and everything. It was fun.”

After catching up with former teammates, it was time to hit the ice and Powell picked up right where he left off.

The second-year forward netted the first goal of the season for Wheeling as he buried a shot from in front of the net on assists from Nailers’ standouts Nick Saracino and Yushi Hirano.

“It felt really good to get that,” Powell said. “Just to get it out of the way being back there. Nicki made a great play and hit me in front so I just happened to be in the right place at the right time. It was a nice play by him.”

The combination of Powell’s ability to score, the veteran presence of players like Saracino and the skills of Hirano could provide plenty of fireworks for the Nailers’ offense this year.

“Nicki has been in the AHL and the (ECHL) for five years or so and he has some experience,” Powell said.

“He is an easy player to play with and even Yush. He might only be a second-year player but he’s a great player.

“I think we are all starting to gel. Everyone is a good guy in the locker room and on and off the ice. It makes it easy to play for the guy beside you.”

Despite the early goal from Powell and a 2-0 lead heading into the third, Cincinnati (1-0) rallied for a 4-2 victory, but Nailers Coach Mike Bavis is optimistic moving forward.

“It was nice to see (Powell) on our side of the bench vs. their’s,” Bavis said. “I thought we played a pretty strong game in a lot of areas. (Cincinnati) is traditionally a hard team to play against.

“We had four or five breakaways and had chances to get it to 3-0 and that’s a big difference from 2-0. We earned a chance to win the game but didn’t get the result we wanted but we feel pretty good about our effort.”

“It’s nice to have some film to go back and look at,” Bavis said. “We’re going up against a tough opponent, so we can re-attack those areas of our game that we want to evaluate. It will give us a chance to see some different guys in the lineup this weekend. We’re getting a small sample size of what we think we have here.”

As for Powell, it will be his first time lacing up the skates as a Nailer inside WesBanco Arena as the ice is down and ready to go for Saturday’s contest.