Rodgers Has Stellar Day in Win Over Raiders 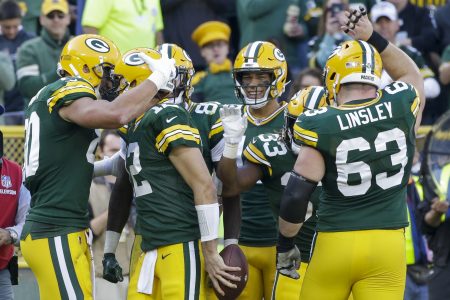 Green Bay Packers' Aaron Rodgers is congratulated after running for a touchdown during the second half of an NFL football game against the Oakland Raiders Sunday, Oct. 20, 2019, in Green Bay, Wis. (AP Photo/Jeffrey Phelps)

GREEN BAY, Wis. (AP) — Aaron Rodgers had his best game by far under new Packers coach Matt LaFleur, throwing for 429 yards and five touchdowns and running for another as Green Bay beat the Oakland Raiders 42-24 on Sunday.

Rodgers completed 25 of 31 passes to eight different targets and finished with the first perfect passer rating of his career, leading LaFleur’s offense to a season high in points.

Even with top target Davante Adams sidelined for the third straight game with turf toe, Rodgers threw for his most touchdowns in a game since Sept. 28, 2015, against the Chiefs.

Derek Carr finished 22 for 28 for 293 yards, two touchdowns and two costly turnovers for the Raiders (3-3), who lost their eighth straight against Green Bay, going back to 1990. The Packers (6-1) have scored 30-plus points in each of their last five games against the Raiders.

CHICAGO (AP) — Teddy Bridgewater threw for 281 yards and two touchdowns, and New Orleans improved to 5-0 without injured starter Drew Brees with a victory over Chicago.

The Saints (6-1) again showed why they still see themselves as Super Bowl contenders even though their star quarterback is out indefinitely because of a torn ligament in his right thumb.

Bridgewater completed 23 of 38 passes, Michael Thomas had nine receptions for 131 yards, and Latavius Murray ran for 119 yards and two touchdowns.

SEATTLE (AP) — Baltimore quarterback Lamar Jackson ran for 116 yards and a touchdown, made key throws when necessary and led the Ravens to an impressive win over Seattle.

Jackson was the best player on the field, outshining Seattle QB Russell Wilson on a day the Seahawks star finally made his first critical mistake of the season. Jackson was especially good in the second half, when he led Baltimore on a pair of crucial scoring drives.

Earl Thomas made his return to Seattle after nine seasons of playing for the Seahawks, but aside from some occasional barking at the sideline of his former team and running off the field twirling Wilson’s jersey over his head after the victory, the former All-Pro safety ceded the spotlight to Jackson.

The second-year quarterback ran for an 8-yard touchdown late in the third quarter on fourth-and-2 to give the Ravens (5-2) the lead. On their next possession and backed up deep in their own end, Jackson made a series of highlight plays to drive Baltimore into scoring position for Justin Tucker’s fourth field goal and a 10-point lead with 3:47 left.

NASHVILLE, Tenn. (AP) — Jurrell Casey recovered a fumble by Melvin Gordon at the goal line with 15 seconds left, and Tennessee pulled out a victory over Los Angeles after a frantic finish.

Gordon initially was ruled down shy of the goal line at the 1. Casey came out of the pile with the ball, and the Titans started celebrating. The play was reviewed and overturned the on-field ruling that Gordon was short of the goal line.

The call was a fumble forced by Titans linebacker Wesley Woodyard that was recovered by Casey for a touchback. Ryan Tannehill knelt down to run out the clock as the Titans (3-4) snapped a two-game skid.

The Chargers thought they had scored the go-ahead touchdown not once but twice in the final 44 seconds only to lose both on review by the replay official. That official also overturned Gordon being stopped on the Chargers’ final play.

Indy (4-2) has won three straight in the series and took over the early season lead in the AFC South.

Brissett was masterful most of the game. He was 26 of 39 with 326 yards, and in a game the Colts only produced 62 yards rushing, they needed Brissett to be at his best — and he was.

The Vikings (5-2) have won three consecutive games in part because their quarterback is making plays to complement one of the NFL’s top defenses.

Matthew Stafford also threw four touchdown passes, all to Marvin Jones, and became the fastest to reach 40,000 yards passing in NFL history. And Jones became the first Lions player in the Super Bowl era with four receiving TDs in a game.

ATLANTA (AP) — Jared Goff threw for two touchdowns and ran for another, and Los Angeles returned to the site of last season’s Super Bowl loss to beat reeling Atlanta.

The Falcons (1-6) suffered their fifth straight loss and had quarterback Matt Ryan leave the game with an ankle injury. Ryan’s right leg bent awkwardly as he was sacked by Aaron Donald and fumbled early in the fourth quarter.

TJosh Allen led fourth-quarter touchdown drives following each of the Dolphins turnovers, and the Bills improved to 5-1 in matching their best start to a season in 11 years.

CINCINNATI (AP) — Gardner Minshew led a fourth-quarter touchdown drive that put Jacksonville ahead to stay, and Yannick Ngakoue returned an interception 23 yards to clinch a victory over winless Cincinnati.

The Jaguars (3-4) managed only field goals by still-perfect Josh Lambo until their rookie quarterback and their depleted defense made game-turning plays at the end.

The Bengals were booed repeatedly during another inept performance.

LANDOVER, Md. (AP) — Robbie Gould made field goals from 28, 22 and 29 yards to provide the only points in an ugly win by San Francisco over Washington in steady rain and driving wind to remain undefeated.

ARLINGTON, Texas (AP) — Ezekiel Elliott ran over safety Malcolm Jenkins on his way to 111 yards and a touchdown, Dak Prescott threw an easy scoring pass on a great fake to his star running back before a TD run and the Cowboys rolled past the Philadelphia Eagles.

Brett Maher finished the high-scoring half, kicking a 63-yarder on the final play before halftime for a 27-7 lead.

Maher, the only kicker in NFL history with multiple field goals of at least 62 yards, has three after kicking a 62-yarder last week against the New York Jets.

His other from 62 was against the Eagles last season, his first in the league.

Prescott’s 8-yard scoring run was the 21st of his career, breaking Roger Staubach’s record of 20 rushing TDs by a quarterback.