Shadyside Volleyball Moves On To Districts 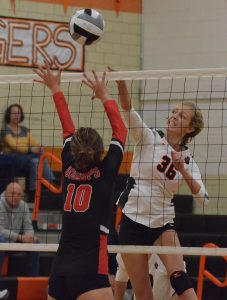 SHADYSIDE — Challenges build character. The last two weeks, the Shadyside High School volleyball team has faced its share of them.

But it’s tournament time, and first-year head coach Eric Mercer expects the going to be a bit rougher than the regular season. There, the Tigers went 20-0 before falling in the finals of the OVAC 2A Tournament last week.

Following an easy victory against Caldwell in its Ohio Division IV sectional opener Wednesday, Shadyside got a bit of a scare from Rosecrans on Saturday in the final. But the Tigers did what good teams do, and that’s find a way to win, something they did in straight sets — 25-16, 25-21, 26-24.

“You never get better unless you play teams that are going to push you,” Mercer said as members of his team posed for celebratory photos. “If you’re just rolling over opponents all season, when you come to an opponent that’s going to push you, you don’t know how to respond. It’s good for us.”

Shadyside, the top seed in the East District, will face another stern test Wednesday when it tangles with No. 2 seed Fort Frye in a district semifinal. The match, set for 6 p.m., will take place at a site to be determined. No. 3 seed Shenandoah will battle No. 5 seed Tusky Central Catholic in the other semi. The Zeps and Saints advanced Saturday with victories against Beallsville and Monroe Central, respectively.

Shadyside (23-1) had an easy time against the Bishops (11-13) in the first set. But toward the end of the second, Rosecrans started to show signs they weren’t going quietly.

The Bishops hadn’t led all afternoon, but closed to within 21-19. Shadyside, however, scored five of the next six points to win.

“I told them they weren’t going to give us the set,” Mercer said. “We had to earn it.

“Like I’ve said all season, forget the mistakes and make the next play; pass, set and hit the ball.”

The Bishops started the third set on a tear, jumping to a 5-1 lead capped by a point from Carly Caldwell. The lead swelled to seven — 14-7 — before the Tigers started to claw back.

Riley Brown made the score 14-10. Moments later, Baylee Wach trimmed the deficit to 14-13.

Rosecrans went ahead 17-13 before Shadyside scored eight straight to grab the lead on back-to-back aces from Gentry Brown. The Bishops rallied twice down the stretch, but never regained the lead.

“They do a really good job of of looking forward,” Mercer said of his squad, which claimed its fourth straight sectional crown. “I’ve told them all season to have short memories; forget about the mistakes and make the next play. They’re really, really good at that. They don’t get down on themselves. If they dig a hole for themselves, they get out of it like we saw in that third set.”

“It’s great,” Mercer said of the sectional title. “That was our next goal after the OVAC loss. We know that Shenandoah (who beat Shadyside in the OVAC final) was on the other side of the (district) bracket from us. Our next goal was to get to the point to where we could possible play them again. We’re one win from that, possibly.”

WOODSFIELD — Monroe Central gave Tusky Central Catholic all it had saturday afternoon on their Ohio Division IV sectional volleyball final. In the end, though, the Saints left marching toward another district appearance.

After winning the first two sets, TCC won the final set 15-11 after the Seminoles claimed the second and third..

“We showed a lot of character by coming back in winning the third and fourth sets,” Seminoles coach Troy Baker said. “The fifth set was a dogfight. (TCC) made a run when they needed to and plays when the needed to.”

Two seasons removed from a regional semifinal run, the No. 4 seeded Seminoles finished 16-8.

“We faced two undefeated teams this season and a good Shenandoah team,” Baker said. “It’s just tough to say goodbye to our seniors.”