Siebenaler Wins It For Nailers in Home Opener 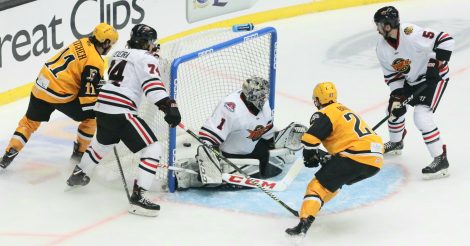 With 24 seconds remaining on the clock in a tie game in Wheeling’s home opener at WesBanco Arena on Saturday, Siebenaler supplied the heroics as he lit the lamp and helped lift the Nailers to a 4-3 victory over Indy and their first win of the season.

After a faceoff in enemy territory, Siebenaler joined the rush and was simply in the right place at the right time.

“There were 46 seconds left at that draw,” Siebenaler said. “The puck was there so I advanced it and I joined the rush and I kept wacking at it and it goes in.

“Everyone is excited right now. That’s our first win so everybody feels great.”

Going against Indy goalkeeper Charles Williams, Nailers coach Mike Bavis understood it wasn’t going to be easy to find the back of the net but was proud of how his team fought to put up four goals.

“I’m proud of our guys in terms of getting four — what we consider — dirty goals right on the doorstep against a really good goaltender in this league.

“We like to have our defense in the rush with the game on the line there and I thought they did a really good job of filling the middle. I don’t know that (Siebenaler) saw the puck but he just took a swipe at it, so we’ll take it.”

The two teams spent the first two periods swapping goals as Alec Butcher got the ball rolling with the first of his two goals of the season 5:59 into the action on an assist from Macoy Erkamps.

Derian Plouffe provided the equalizer with 2:07 remaining in the opening period on a power play — the first of two power play goals the Fuel collected on the night.

“Structurally, I still like our penalty kill,” Bavis said. “We let one up off the rush at the very end but in general, our penalty kill has been really strong. So, I would give more credit to Indy for their puck movement.

“They get rolling into different looks but I’m pretty satisfied with our penalty kill.”

Cam Brown quickly answered less than two minutes later as he beat Williams with 55 seconds left in the period on helpers from Nick Saracino and Lucas Kohls to give Wheeling a 2-1 edge at the first intermission.

Saracino and Kohls each finished with two assists.

After Graham Knott knotted the game again at 2-2, Butcher corralled a loose puck that bounced off the post and blistered the back of the net for a 3-2 advantage at 10:23 in the second.

“That’s a fast team,” Bavis said of Indy. “Their puck movement is exceptional. At times, it felt like we were really chasing the game but we hung in there. It’s a good win anytime you can win in this division.”

The Fuel nearly netted a third power play goal late in the third as Alex Krushelnyski sent a backdoor shot toward the open net but Nailers goalie Jordan Ruby made a diving save to keep the game deadlocked.

Ruby finished with 26 saves in his first start of the season, while Williams made 23 stops for Indy.

“It’s great to have him back as far as the organization goes,” Bavis said of Ruby. “You can certainly make a case that he was our best goalie in stretches last year. He’s a great teammate, great for the community and he stood tall (Saturday).

“We’re counting on him. We have another young goaltender in the organization in Alex D’Orio and to have Jordan mentor him is great.”

As far as the new ice goes inside of WesBanco Arena, it looks ready for more incredible finishes throughout the season.

“The ice was great as far as I could see,” Bavis said. “As the guys say ‘it’s fast ice’. It doesn’t feel like we missed a beat. We’re just happy to be home again.”