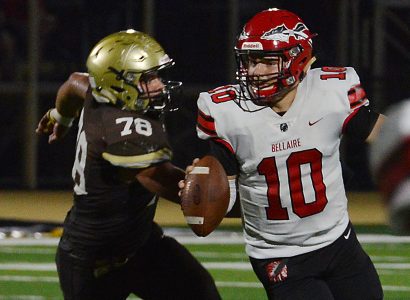 BELLAIRE — The mental aspect of sports can be just as important as the physical side.

Both St. Clairsville coach Brett McLean and Bellaire coach Mark Spigarelli are spending some time on the mental aspect as they prepare for Saturday’s matchup at Nelson Field.

However, the rationales are slightly different.

McLean is trying to make sure his team is in the right frame of mind after losing two consecutive games for the first time since 2016.

“Where we are mentally is definitely at the forefront,” McLean said. “Whenever you lose a couple of games, a lot of naysayers can come out and kids can get infected with negativity. The season is getting short and shorter, so we have a lot to do between the ears this week at practice. We’re not used to being in this position, and I hope it’s something we never become accustomed to.”

On the other side of the field, the Big Reds are coming off an impressive, 36-7, victory against Beaver Local. However, Spigarelli has been cautioning his team about getting caught up in the results of the week prior for both teams.

“We know St. Clairsville is going to come down here hungry and playing for blood,” Spigarelli said.

“They’ve lost two straight games, but both have come in the final minute, so they just as easily could have won both games. We know we’re going to get their best effort because Coach McLean and his staff do a great job and they’ll have those guys ready.”

Both teams find themselves in the thick of their respective region’s playoff chase. The Red Devils have dropped to fifth in Division IV, Region 15, while the Big Reds have climbed into fourth in Division V, Region 17.

However, neither coach will allow his team to get caught up in any of that chatter. The focus is strictly on the task at hand.

“Every game is a big game, but this is one that people in the community really want and look forward to,” Spigarelli said. “St. Clairsville is one of our top rivals and we’ll treat this very similar to Martins Ferry week.”

The Red Devils, meanwhile, can’t afford to look anywhere than at the Big Reds.

Bellaire’s physicality has been clearly evident on the defensive side where Spigarelli has the unit playing with a chip on its shoulder. All told, the Big Reds are allowing 12 points a game.

“They’re obviously very physical up front and they’re using a lot of the same schemes, but they’re showing some different things out of it,” Spigarelli said. “Their tailbacks provide a different dimension than they’ve had the past couple of years with (Brady) Kolb.”

Tonkovich has been solid in the passing game. He’s completed 49 of 86 passes for 598 yards and five touchdowns. Tight end Derek Witsberger has been his top target with 11 receptions for 152 yards and three touchdowns.

Bellaire’s offense has been more balanced than it was a season ago when senior tailback Cole Porter re-wrote the school rushing records.

Senior Bobby Roth triggers the offense at quarterback. He’s had some ups and downs, but has completed 67 of 142 passes for 831 yards and six touchdowns.

Senior Trenton Wilson is the top pass catcher with 22 grabs for 270 yards, but classmate A.J. McCarthy is the big-play threat with 15 receptions for 215 yards and five touchdowns.