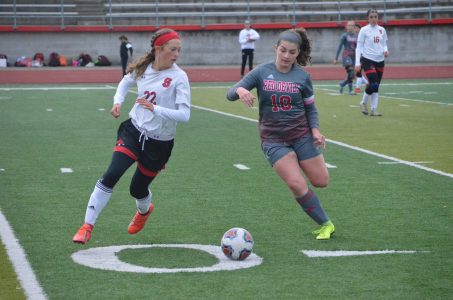 St. Clairsville and Steubenville went toe-to-toe like a pair of heavyweight boxers on the artificial pitch inside chill-filled Red Devil Stadium, with the fourth-seeded Red Devils delivering the lone knockout punch in a 1-0 victory. It marked the second time St. Clairsville has slipped past Big Red this season, winning 2-1 a few weeks back.

With the Red Devils nursing their slim 1-0 advantage, fifth-seeded Steubenville (9-8-1) nearly evened things. However, goalkeeper Jaeda Nowak kept things that way. Big Red’s Anastasia Crisante found herself all alone in the lower box to Nowak’s right. Her shot was headed for the net but Nowak dove to her right and deflected the ball out of harms way. It was her fourth — and final — save of the night and preserved her eighth shutout.

“The biggest one (shutout) was (Thursday). It’s survive and advance time,” St. Clairsville coach Wes Stoner said of Nowak’s performance. “As usual this year our defense has been amazing and tonight was no different. They played excellent. We didn’t give them (Steubenville) many chances, if any. They got one really good chance that I remember and it came on a breakdown by us, but Jaeda saved it. I told her when she came off the field that she was the reason this game wasn’t going to overtime.”

The Red Devils got the only goal midway through the 21st minute. Emily Vera, the lone senior on the Red Devils talented roster, kept the ball in the Steubenville end of the field.

She then sent a beautiful feed to Emily Thompson, a sophomore, to the left of Big Red senior goalkeeper Zoe Nocera. Thompson let loose a right-footed shot that found the far corner of the net. It came St. Clairsville’s third shot of the contest.

Nocera, who had to leave the match in the 78th minute with an undisclosed injury after a collision with Thompson, finished with five saves on six shots, but none were bigger than when she turned away a blast from Macy Malin with a diving punch away. Lakyn Blackburn stopped the lone shot she faced.

“They were in the right place at the right time and popped one through,” Steubenville coach Jared Robinson said. “Unfortunately, we hit everywhere on the bar (Thursday) and just couldn’t find the back of the net.

“Hats off to both keepers. Both played a tremendous match. Both of these teams played a tremendous game. If you came here and watched this game, you saw what a sectional co-final should be. A game between two evenly matched teams going up against each other.

Stoner said that although Thompson scored the goal and Vera assisted, everyone was involved.

“Every time there is a goal in this game there’s effort everywhere from a lot of people,” he noted. “If we didn’t stop them down here (in our defensive end) it (the ball) wouldn’t have got up to Emily (Vera) to setup Emily (Thompson) to score. We talk about that all the time. From Jaeda up, all goals scored and goals scored on us is on the 11 players on the pitch at that time, not one person.”

With the cherished triumph, St. Clairsville (11-5-2) moves on to the district semifinals Monday against second-seeded John Glenn, a 4-0 winner over No. 12 Zanesville Thursday night, at a site to be determined by the Ohio High School Athletic Association.