Steubenville Girls Move On in Soccer 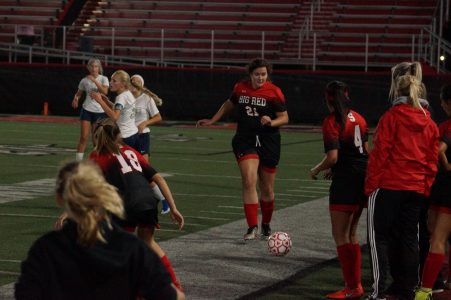 STEUBENVILLE — The Steubenville girls soccer team was a different team in the second half.

After a sluggish start against Morgan, No. 5 seed Big Red turned things around in the second half as they scored two early goals and two late goals en route to a 4-1 victory over the No. 11 seed Raiders in an Ohio Division II Eastern District Sectional Semifinal Monday night on Reno Field inside Harding Stadium.

“In these kind of games, there is a lot of emotion and a lot of nerves,” Big Red (9-7-1) coach Jared Robinson. “In the first half, the girls shook off their nerves, and that led us to start connection passes. Once we settled down, we connected passes, we were able to find opportunities.

“We did not finish in the first half, but we came alive in the second half.”

Trailing by two goals, Morgan scored with more than nine minutes left to make it a one-goal game, but Big Red delivered a pair of late goals to secure the victory and advance to the next round.

With the win, Big Red will play No. 4 seed St. Clairsville in a sectional co-final at 6 p.m. Thursday at Red Devil Stadium. St. Clairsville advanced to the game by defeating No. 7 seed Indian Creek, 1-0, Monday evening at home. Early in the season, the Red Devils defeated Big Red, 2-1, Sept. 3 at home.

Mary Marshall made multiple big plays for Big Red in the second half, and the junior tallied two goals and an assist to lead the way offensively for her team.

“We connected passes in the second half, and Mary Marshall made some big plays for us in the field,” Robinson said. “She was able to get free of our man marks. She was in the right place at the right time, and she was able to finish a couple of times. Once the first goal went in, it brought us to life even more, and we did not let up.”

Also for Big Red, Jadyn Bennett collected a goal and an assist, while Anastasia Crisante contributed a goal.

Zoe Nocera made six saves, including a big one, in goal.

McKenna Schramm scored the lone goal of the game for the Raiders.

Morgan used two goalies in the game. Rilee Coon started in the net, and she made 10 saves before being replaced by Lexie Siltner with 9:10 remaining to be played. Siltner did not make a save.

Marshall opened the scoring with 31:10 left to play to give Big Red a 1-0 lead. Bennett assisted on the goal.

Marshall extended her team’s advantage when she netted her second goal a couple of minutes later. Marshall took advantage of a missplay by Coon, and she ripped a shot into the back of the net giving Big Red a 2-0 lead with 28:58 left.

Big Red maintained a two-goal lead for more than 19 minutes before Schramm scored from long range thanks to a big bounce to pull the Raiders to within 2-1 with 9:10 still showing on the scoreboard clock.

“We did well,” Radu said. “We played well. We just lost a little bit of focus, and Steubenville made us pay for it. After the second goal, we lost focus.”

The goal gave Morgan a boost in confidence, and the Raiders pushed forward trying to net the equalizer, however, Nocera and the Big Red defense was up to the challenge and kept the visitors from McConnelsville off the scoreboard for the remainder of the game.

“That goal seemed to energize them,” Robinson said. “Our girls did a good job. They were able to settle down. They did not get flustered. We were able to push up and score two more goals.”

Crisante swung the momentum back to Big Red’s side when she scored an unassisted goal with 4:37 on the clock to regain a two-goal advantage for her team at 3-1.

Bennett capped the scoring and sealed the deal for Big Red when she found the back of the net with 2:22 remaining to extend Big Red’s advantage to 4-1. Marshall assisted on the goal.

“At this time of the season, it is one game at a time,” Robinson said. “We want to go on a roll. We had a rough patch with injuries and with playing some tough teams. We told the girls after our last game that this is a new season and a new start. We are taking it one game at a time.”

The game was the final one at Harding Stadium for Big Red’s five seniors — Myla Gulan, Kira Head, Melanie Mamula, Bennett and Nocera.

“This group means a lot to the program, to the coaching staff, to the parents and to the other girls,” Robinson said. “They are the spirit behind us, and they are the leaders in front of us. I cannot say enough about them. They have grown into excellent young ladies on and off the field. We are proud of everything they have accomplished. They are a special group. This group is really going to be missed next year.”

The senior girls will be honored at the boys soccer team’s game against Wheeling Central at 6:30 p.m. tonight at home.