The Regans: A Friendly Family Rivalry On the Pitch 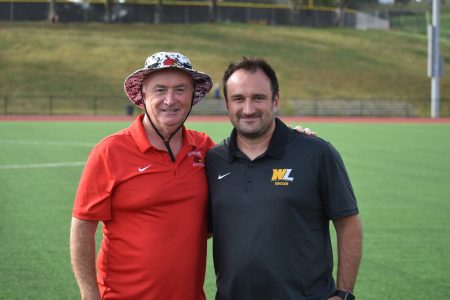 Photo by Kyle Lutz Wheeling coach James Regan, left, and his son and West Liberty coach Sean, pose for a photo before last Wednesday’s matchup between the Cardinals and Hilltoppers. West Liberty went on to win, 2-1.

WEST LIBERTY — The cross-county rivalry between West Liberty and Wheeling University has had many storylines over the years.

It just published a new chapter in men’s soccer last Wednesday. While the match was a classic, it was what was on the sideline that was the headliner.

Longtime Wheeling men’s soccer coach James Regan faced off against his son, Sean, who is in his first season as the Hilltoppers coach.

When the clock struck zero, it was Sean who claimed the family bragging rights. The win (2-1) also gave Sean his first victory as Hilltoppers coach.

“Super excited,” Sean Regan said. “It’s a game when I got the job, we marked this to be the big one. The local ties between Wheeling and West Liberty, it brings a sense of community out and the fan base.

“It just makes it a little bit more bittersweet for Wheeling to see my dad lose, but at the same time, we won and that’s all that matters. I’m happy about that.”

For Sean, the Hilltoppers victory was not only a victory against his father, but it was also his first victory as coach on the Hilltop.

“Yes. Big time. It’s absolutely special,” Sean Regan, who also played at Wheeling under his father, said. “Any time you get your first win at any school you’re at it’s huge. But double the facto that’s it’s against my alma mater and my father, it just magnifies it for me. It gives me bragging rights until November when we play the next game down in Wheeling.”

For James, he has been coaching at Wheeling for 35 years.

“It’s funny. Obviously, it’s a good scenario because I’m happy for him,” James Regan said about his son. “He’s getting a good opportunity at a good program that he’ll build. And the rivalry, that’s the fun part I guess, but it’s a friendly rivalry. There’s no harm afterward.

Before securing a job at the Hilltop, Sean was the headman at Bethany College for a handful of years. The Bison and the Cardinals played scrimmages against each other, but last Wednesday’s game was the first time that it officially counted in the standings when the father and son were on opposite sidelines.

“Most of it was for scrimmages because they were D-III and we were D-II,” James Regan said. “We never played really in a real game until (Wednesday). This is basically the first time. Obviously I wish we had a better scenario. Last year we had a strong team and we went to the conference finals. Then with our restructuring, we lost a lot of players and now we have to rebuild. But I think these teams were fairly even, so I think it was a fair score.”

Both programs are in building/rebuilding mode for a couple of different reasons. West Liberty men’s soccer is in its second varsity season as a sport. For Wheeling and the recent events that have happened to the university, James Regan and his squad are in rebuilding mode.

“It’s strange because when I was at Bethany all those years, we always played in the preseason or the springtime. So, we never had anything going for it in terms of points or value,” Sean Regan. “So, to play for the first time where it meant something in the standings, I was probably more geared up than he was because he’s a season veteran. And I always want to beat my dad and it was the first time I won.

“So, it’s very happy for me. Obviously playing against my alma mater and knowing their situation that they’re in as a school, it’s tough for them. But they’re still hanging in against the Big Four teams. And we knew even with their shorten roster, it was going to be a battle because it’s a rivalry.”

And throughout the years, there have been some memorable games and moments when the two teams have faced off. And if the first matchup between father and son was any indication of what the future holds for men’s soccer between the two programs, then fans are certainly will be in for some fun.

“It’s nice to see West Liberty and Wheeling in all sports,” James Regan said. “We’ve had that big rivalry forever in basketball, now we finally have it in football and now we finally have in men’s soccer. So it’s really neat we have this kind of rivalry between the two schools in the Wheeling area.

“I’m happy for that and we’ll continue to do that as long I’m here and he’ll be there a lot longer than I’ll be here. So, I’ll look forward to those games every time we play.”