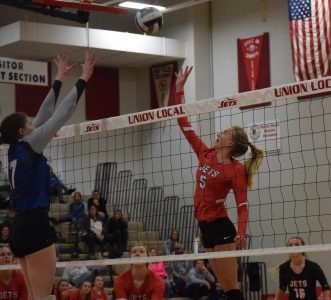 MORRISTOWN — There’s absolutely no getting around it.

Staring at a two-set deficit against a Buckeye Trail team that was fresh off capturing the OVAC Class 3A title and knocking off perennial power Tusky Valley in the opening round of the sectional earlier this week, Union Local found itself firmly up against it.

“We told the kids to play each point individually, try to win the (third) set and then go after the next one,” Sechrest said.

The message came across loud and clear. Union Local staved off elimination in the third and fourth sets and then continued to ride the wave of momentum in the fifth and prevailed there as well to punch its ticket to the district tournament.

“The pressure was on and the girls had to produce and they did,” Sechrest said. “We did what we had to do to get to the fifth and then it becomes kind of like a race to see who can get to 15 first.”

Next up for the Jets is a date with Cambridge which dispatch Ridgewood on its home court in three sets. The Jets and Bobcats will meet Wednesday evening at 6 at a site to be determined in the coming days by the Eastern District Athletic Board.

“We have to go back to the drawing board, work on things and come back and play our game,” Sechrest said.

The Jets relied heavily on the Sisters Kildow once again. Junior Casey Kildow and freshman Torre Kildow have been two of the unquestioned leaders for the Jets all season. They delivered again to a tune of 15 and 17 kills, respectively.

“What I like about volleyball is one (set), you can look like the best team, but the next (set), you can look like a team that’s never played,” Sechrest said. “We were down (emotionally) after the first two sets, but winning that third gave us some confidence. (My assistant) Julie (KIldow) is a Jet through and through and she’s great because she kind of pumped them up.”

A little more than a week ago, the Warriors knocked off the Jets in the OVAC semifinals. It was the first and only loss of the season for UL.

Buckeye Trail had actually won three consecutive matches at UL because it was the site of the Warriors’ conference title game win and they opened tourney play there, too.

“Union Local is ranked 10th in the state for a reason,” Trail coach Wendy McVicker said. “They poured it on at the end. We got up two sets and you hope and think that things are going to go great, but we kept stressing to the girls not to stop and they didn’t. We kept fighting the whole time, but we’re the only team that’s beaten them and it’s hard to do it twice, especially on their court.”

For McVicker, the toughest part wasn’t the loss. It was the finality of the season. She spent time consoling every player as they left the locker room.