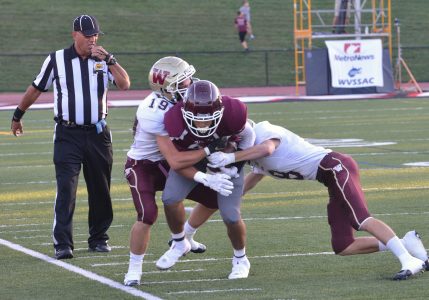 Photo by Scott McCloskey Jalen Creighton and Wheeling Central look to get back in the win column as they make short trip to Dave Bruney Football Complex to take on Martins Ferry.

MARTINS FERRY — Martins Ferry and Wheeling Central are two of the area’s most storied football programs.

When they meet Friday night at the Dave Bruney Football Complex, they’ll have something else in common, too.

Both are anxious to get the bad tastes from their last games out of their mouths as they prepare for their respective stretch runs.

The Maroon Knights have had to sit around for two weeks since their last game, which was a 42-0 beatdown at Fort Frye.

“The week off allowed us to get healthy and re-group after getting our butts beat by a good team,” Wheeling Central coach Mike Young said. “With a bye week, it’s two-fold. You have to lick your wounds a little longer, but we were able to get back to some of the basic things like blocking and tackling and not have to focus on a scheme, so we’re hoping we’re able to use that week well moving forward.”

The Purple Riders, meanwhile, dropped to 3-4 on the year after a 21-7 setback at Indian Creek. This week closes out the home slate for the Riders, meaning senior night will be celebrated.

“We have 11 seniors and they have to decide how they’re going to end their season,” Ferry coach Chas Yoder said. “This final opportunity to play at home means a lot to our kids and I expect them to come out ready to play.”

While Wheeling Central remains right in the thick of the West Virginia Class A playoff chase despite two losses on the season, the Purple Riders are clinging to faint hopes. Ferry finds itself at 3-4 on the season and in 18th place in the computer rankings in an ultra-competitive, Region 17.

Neither Yoder nor Young are worried about anything more than the task at hand, which both believe will be tough.

“We saw Martins Ferry play against Indian Creek and they battled and if they caught a break here or there, especially during the first half, the momentum might have swung in their favor,” Young said. “They’re without a doubt the most improved team I’ve seen from Week 1, when we saw them against Shadyside, to now.”

The Purple Riders are more of a passing team than they’ve been historically with senior quarterback Jacob Probst leading the charge. He’s thrown for 1,152 yards and 11 touchdowns.

While the passing game has been solid, Yoder wants to see his team run the ball better. All told, the Riders have gained 783 yards on the ground. Chase Goff is the leading rusher with 268 yards.

“We need to be more balanced and take advantage of our chances,” Yoder said. “We didn’t rush the ball badly last week, but I think we’re going to mix it up a little bit and we’ll need to get some hard-fought yards if we’re going to give ourselves a chance.”

The Maroon Knight defense is led by senior linebacker Adam Murray, who has been charted for 71 tackles. He left the aforementioned game at Fort Frye early, but is expected to be in the lineup this week, according to Young.

Central’s offense is also expected to be at full strength. Senior quarterback Curtis McGhee also left the last game early with an eye injury. Young indicated he could have returned, but “the story had been told” and he didn’t want to risk further damage.

McGhee is a dual-threat. He’s rushed for a team-high 629 yards. He’s also thrown for 546 yards and seven touchdowns. His favorite targets in the passing game are Jalen Creighton, who has caught 22 passes for 345 yards and five touchdowns, and junior Peyton Marling, who has made 12 receptions and scored twice.

“Ferry’s defense is very sound and they get after it,” Young said. “We know we will have our work cut out for us.”