Wheeling Park Has Challenge Ahead in Musselman 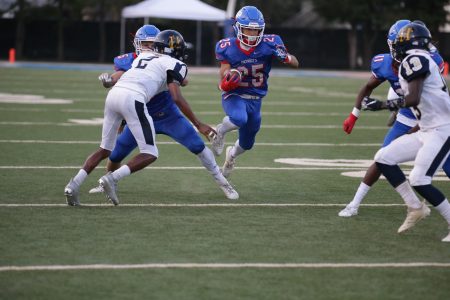 Photo by Alex Kozlowski Steven Mitchell and Wheeling Park have a tough task Friday night as they travel to Inwood to take on Musselman. The Patriots are ranked sixth in the SSAC rankings while the Applemen are fifth.

INWOOD — With the high school football regular season heading for the homestretch, a pair of West Virginia Class AAA heavyweights will battle Friday night with two of the most explosive offensive players in the state on full display.

Coach Chris Daugherty will take his 5-1 record Wheeling Park squad to the Eastern Panhandle for a key matchup with 6-1 Musselman. Entering the contest the Patriots will be sitting at No. 6 in the latest big-school playoff poll while Coach Brian Thomas’ Applemen are one spot higher at No. 5.

The game is a rematch of a classic battle last year at Wheeling Island Stadium where Musselman pulled off a thrilling 41-35 victory.

As far as individuals go, there will be two of the most explosive offensive players in the state battling in the contest with record-setting Patriots’ senior quarterback Alex Dunlevy and running back Blake Hartman for the Applemen.

“No question the Hartman kid will be the best player we will have faced so far this season,” Daugherty said. “They have the ability to get him the ball in so many different ways and he does a good job taking advantage of that.”

Wheeling Park has had a flair for the dramatics in their last two outings, both last-minute victories. Last Thursday the Patriots traveled to Morgantown, and similar to two weeks earlier against Zanesville, overcame a big deficit to win late. Daugherty’s crew escaped with a 34-28 win over the Mohigans.

“I wish we could just go out and do things normally, but we seem to have a knack for the late-game winners and a win is a win,” Daugherty said. “There have been times we have not looked very good and times we have looked phenomenal.

“But if we aren’t able to put it all together and get back to business this is the type of game we could lose. You can talk about luck, but you have to do good things to create opportunities and the fumble recovery that led to the game-winning score last week was proof of that.

“These kids have proved that they will continue to battle no matter what the score is. We have shown that we can stay in games, keep going and get it done in the end.”

As he has all season long Dunlevy was one of many keys to the victory, setting a school record with 370 passing yards. In all, the senior gunslinger was 20-of-29 with three touchdowns. For the season Dunlevy has completed 85-of-228 tries for 1,468 yards, 16 touchdowns and just two interceptions.

For a quarterback to be successful he must have a big-play receiver and Dunlevy not only has one, he has many. While Carson Namack is the leading receiver with 24 catches for 468 yards and three scores he is joined in the receiving corps by Stevie Mitchell, Shaheed Jackson and Sincere Sinclair.

Mitchell came up huge last week with seven catches for 128 yards and two touchdowns, including the two-yard game-winner with 33 seconds to play. Nate Hairston also caught a 61-yard touchdown pass against Morgantown while Jackson returned a kickoff 97 yards for a score.

The Patriots’ running game wasn’t much of a factor against the Mohigans with Dunlevy’s passing, rushing just 21 times for 56 yards, but Rapheal Bradley leads the team with 56 attempts for 400 yards and five scores while Dunlevy has 296 yards on 49 carries and five more touchdowns. Kenya Robinson had a team-high 25 yards and a score last week.

“I have a ton of respect for Coach Daugherty and Wheeling Park,” Thomas said. “I have said it before and I will say it again, last year’s game was very exciting and an absolute classic.

“They have a great program and I expect nothing but another great, tough game with them Friday night.”

The Applemen are led by Hartman, who has rushed for over 1,200 yards and 21 touchdowns, including five in a 62-6 victory over Hedgesville last Friday night. Hartman has scored 26 total touchdowns on the campaign including a pair through the air and has 15 catches for 313 yards.

“Blake is a pretty special kind of kid,” Thomas said. “You don’t run into kids like him very often. He always plays to the best of his ability, but he is not the only one and he is definitely a team-first kind of kid is what I love most about him.”

Caleb Horner and Caleb Hardy are both capable quarterbacks for Musselman with Hardy also capable of rushing the ball. Nick Zamora and Kegan Teets are also capable receivers. Horner has thrown for 378 yards and five touchowns on 20 completions while Hardy has 283 and three scores going 21 of 25 in the process. Zamora has hauled in 18 passes for 196 yards and two touchdowns while Tees has 12 catches for 322 yards and five scores.

Hartman (50 tackles, four sacks) and Justin Rhinehart (60 tackles, six sacks) are the Applemen’s leaders on the defensive side of the ball.

“They run good schemes and Hartman is their everything,” Daugherty said. “But they are a great opponent as a whole and it is nice to get to play a team ranked higher than you are. They are a very good football team and it is no accident that they have won so many games.”

Thomas is also aware that Friday night is a big game for both teams.

“You go out and play every week knowing that somebody has to win and somebody has to lose and you don’t want to be the team with the hiccup,” Thomas continued. “This is the type of game that is going to make both teams better no matter how it ends.

“Both teams just have to be of the mindset to get ready to play and go out and give it everything they have and get ready for the rest of the season.”