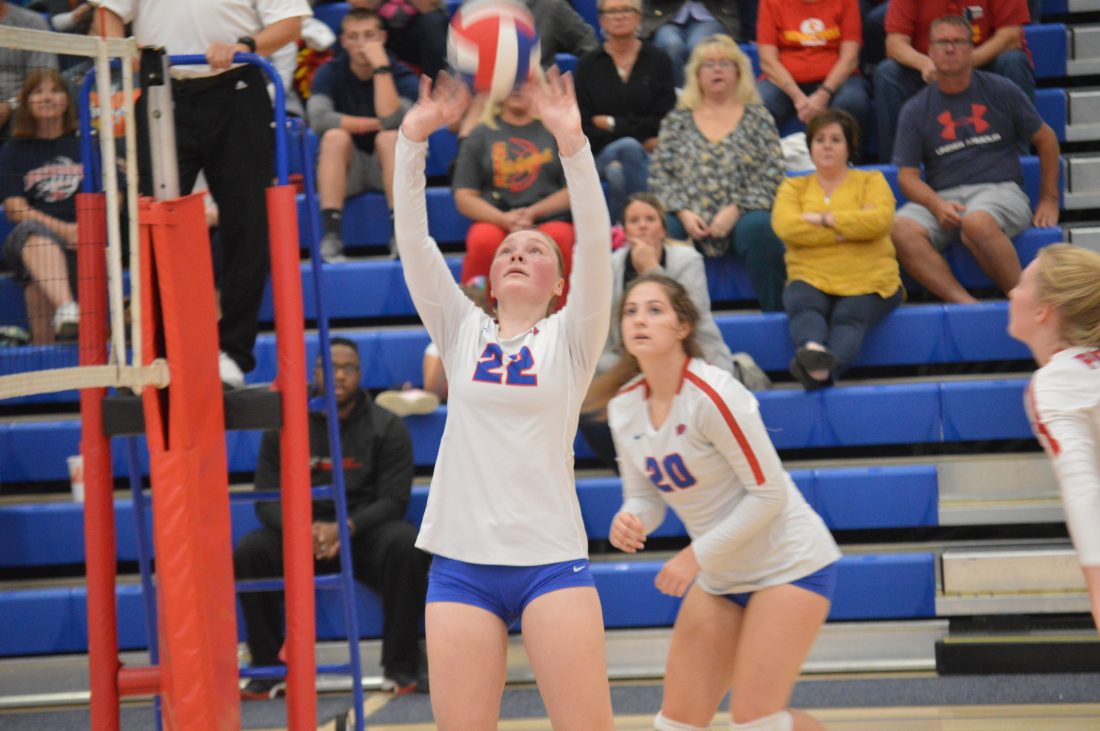 Photo by Kyle Lutz Wheeling Park’s Any Ritz sets the ball during Tuesday’s game against Indian Creek. The Patriots defeated the Redskins in straight sets.

WHEELING — With strong play at the net, both on offense and defense, Wheeling Park’s first trip to the Ohio Valley Athletic Conference volleyball tournament turned into a berth in the championship round Tuesday night.

Rachel Simon (14), Leah Gaudino (8) and Ally Fanko (8) combined for 30 kills and the Patriots came from behind to record a 26-24 first game win before cruising 25-14, 25-15 in the ensuing two games to sweep past Indian Creek in a Class 5A semifinal match at the Palace on the Hill.

The two schools have split their two previous meetings this season with the Patriots winning in five games on the hill.

“This is the school’s first trip to the OVAC tournament, and the entire Wheeling Park community is so excited and proud,” Gentle said. “This is a great group of girls and they really deserve this.”

Indian Creek took an early lead in game one before Wheeling Park rallied to go up 10-4 on seven consecutive points with Caylin Angel holding service. However, Coach Molly Edgerly’s Redskins (10-10) battled back with a nine-point run of their own to grab the lead back at 18-17.

The teams traded the lead three other times with Indian Creek actually sitting at game-point with a 24-22 advantage at one point. But Fanko recorded a kill and then kept service before a Leah Gaudino completed the come-back with a 26-24 verdict.

In all, Game 1 produced five lead changes, four of those coming late, and five ties.

The Redskins once again took an early lead in game two before the teams traded ties and leads until Park took control on another Fanko kill that gave them the lead for good at 11-10.

Game 3 was also close, and back-and-forth, early on before Wheeling Park used an Indian Creek mistake to take the lead for good at 7-6. Another Patriots’ run, this time 9-0, helped them take control before cruising to the finish line and a three-game sweep.

“Our girls definitely dominated the net (Tuesday),” Gentle said. “I think our hitters really built their confidence level after getting rid of the butterflies following the first game. They hit the ball hard all night.

“We really stepped it up on defense as well and just did not let the ball drop while our service receive passes were beautiful.”

It wasn’t hard for Edgerly to figure out where things started going wrong for her Redskins.

“As soon as we lost that first game we lost the momentum and it just never came back to us,” Edgerly said. “We have been working on keeping momentum and making runs, but we struggled with it (Tuesday). Hopefully it is something we can fix before sectionals.

“I think we will take the next week to really work hard on being aggressive and loud as a time and trying to push things forward.”

The other semifinal produced a special night for University in more ways than one.

After winning the OVAC big-school championship in 2015 the Hawks have been knocked off in the semifinals in each of the past three campaigns. And while advancing to its second championship match, University also awarded long-time coach Don Godfrey with his 400th career victory on the bench.

“I’ve kind of kept that low-key,” Godfrey mentioned of his accomplishment. “The girls, parents and school aren’t even aware of it yet, but it is something that is very special to me.”

It only took three games to get to that cherished victory, however, Coach Kristin Taylor’s Big Red squad pushed them to the limit the entire way.

University (12-3) jumped to a quick 8-0 lead in the first game before Big Red (12-8) used a 9-1 run a short time later to take a 12-11 lead on an Anna Taylor ace. The Hawks again moved out to a four-point lead at 16-12, but once again Steubenville battled back, scoring the next four points to knot the score on Sammie Cucarese’s ace.

Godfrey’s squad used a 4-0 swing to take a 24-19 lead a short time later before Sierra Lanham’s tap found nothing but floor to end the 25-21 victory.

University scored the initial three points in game two and while Big Red eventually evened the score at 4-4 the Hawks never trailed again after taking a 5-4 lead. The lead grew to as many as seven along the way before a 5-0 Steubenville rally late in the game cut the deficit to 22-20.

A Big Red serve into the net ended things with another 25-21 score.

The Hawks seemed to be in control again in game three leading by as many as six at the midway point before Steubenville made a late run, scoring seven consecutive points with Kiera O’Brien serving to battle back. Steubenville actually took the lead at 20-19 and again at 22-21 on a Taylor tap.

However, University again took control late, scoring the final four points of the game with Mallory Napolillo’s kill sending the Hawks back to the finals.

“They kept battling back every time we got a nice little lead, but our girls hung in there and were able to get it done,” Godfrey said. “Our two seniors 23 (Ashten Boggs) and 35 (Napolillo) have been getting it done at the net all season long and they kept it going (Tuesday).

“We managed to keep a comfortable lead at times but still had to play strong at the end in all three games. My comfort zone is a lead of five or more. I was worried about that third game because teams have a tendency to let up a little after winning the first two and then anything can happen.

“It’s real nice to get this win and get back to the championship. We won in our only other trip to the finals so hopefully we can do that again Saturday. We played a couple of great matches with Wheeling Park earlier this year.”