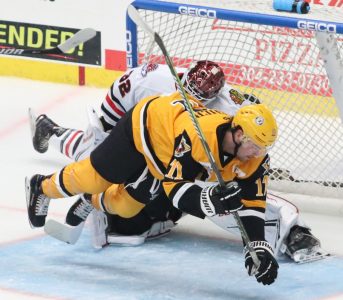 For the second straight day inside WesBanco Arena, the Wheeling Nailers pocketed a thrilling victory in the final 30 seconds of action to defeat the Indy Fuel 4-3 on Sunday.

Wheeling rallied from 2-0 down in the game to complete a suspensful, yet satisfying home opening weekend as it improved its record to 2-2 and picked up four key points in the division.

As time ticked down, it was the highly talented Yushi Hirano who sent a wrist shot from above the right circle and past Indy goalie Chase Marchand with 26 seconds left for the game-winner and his second of the game.

Wheeling’s Cam Brown set up the play by winning a face-off in Indy territory and scooting the puck back to Myles Powell above the left circle, who found Hirano six seconds into a power play.

“This was really important,” Hirano said of his team earning four points this weekend. “Last year it wasn’t enough so this is great for us.”

With Wheeling trailing 3-2, the Nailers were, again, successful on the power play. Following a brief 5-on-3 advantage, Brandon Hawkins showed off his powerful wrist shot from near the top of the left circle for the equalizer with 6:44 to play.

Powell and Cam Brown supplied assists on the play and both finished with two points. Hirano and Brown have recorded at-least one point in all four games this season.

After falling behind 2-0 in the first period on Indy goals by Bobby MacIntyre and Alex Krushelnyski, Wheeling outshot the Fuel 20-13 the rest of the way.

“The most important thing for me is that we kind of hung in there after a slow start,” Nailers coach Mike Bavis said. “The second half of the game I thought we had our way. We were much stronger mentally, we had better puck support and our power play kind of got it going, which is nice to see.”

Both of the Nailers’ first two goals came within a minute of Wheeling penalty kills.

The first came from Brown, who whistled a shot from the slot on assists from Alec Butcher and Hirano, to cut the deficit in half with 11:44 gone in the second period.

Next, it was Hirano who knotted the game as he collected a rebound near the net and delivered a back-handed goal 57 seconds into the third period.

Spencer Watson looked to have stolen the momentum from Wheeling at 9:44 in the third as he netted his second of the weekend for a one-goal advantage but the Nailers remained strong and pulled off the comeback.

After stopping six shots and allowing a pair of goals in the first, goaltender Alex D’Orio saved 12 of 13 shots the rest of the way and finished with 18.

D’Orio made his third start of the season and picked up his first win after two tough road losses.

“(D’Orio) is a really poised goaltender,” Bavis said. “He’s got a great mindset and there was no doubt in my mind he was going to reset.

“That was a hard game that we put him into at Fort Wayne. I was really confident that he was going to come back in and feel good about himself and stand up.”