Auburn at Center of All Down Stretch 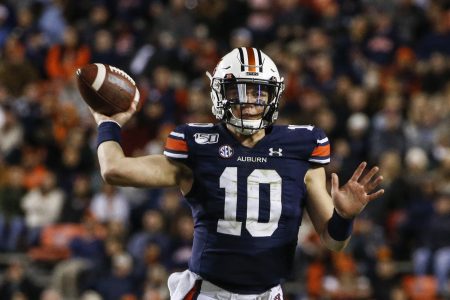 Auburn quarterback Bo Nix throws a pass during the second half of the team's NCAA college football game against Mississippi, Saturday, Nov. 2, 2019, in Auburn, Ala. (AP Photo/Butch Dill)

Over the next three weeks, Auburn will be in the middle of the action even though the Tigers are outside the playoff race.

No. 13 Auburn plays two top-five playoff contenders in No. 5 Georgia (No. 4 CFP) and No. 4 Alabama (No. 5 CFP) at home in November, and depending upon how the Tigers do their coach may or may not be in danger of losing his job.

If the ground on the Plains is shaky for Gus Malzahn, he could become the most accomplished coach in a job market that already includes vacancies at a recent national championship program (Florida State) and the Southeastern Conference school (Arkansas) in his home state.

First chance for the Tigers to play spoiler comes Saturday at Jordan-Hare Stadium against Georgia in the Deep Southís oldest rivalry. Meeting No. 116 will feature two tough defenses and a seasoned veteran quarterback in Georgiaís Jake Fromm facing a freshman quarterback in Auburnís Bo Nix, who has had a bumpy ride this year.

Auburn-Georgia is one of a season-high five games matching ranked teams on the schedule. The other one with major playoff implications is in the Big 12, where No. 12 Baylor tries to stay unbeaten against No. 10 Oklahoma.

Maybe a ëBama hangover slows down the Tigers? Probably not … LSU 42-17.

Since the Scarlet Knights joined the Big Ten, they have lost five games to the Buckeyes, average score 54-5 … OHIO STATE 54-5.

Tigers beating Georgia could make the playoff race even more confusing if the Bulldogs go on to win the SEC championship; Auburn is good at making things complicated … AUBURN 24-20, UPSET SPECIAL.

Wildcats have quietly collapsed after a four-game winning streak … OREGON 45-17.

Floyd of Rosedale is on the line; the Big Tenís most famous pig has resided in Iowa since 2015 … MINNESOTA 20-18.

Bears have been escape artists with four one-score victories in the Big 12, including two overtime games … OKLAHOMA 38-31.

Mizzou should have QB Kelly Bryant (hamstring) back this week after getting shut out without him last week by Georgia … FLORIDA 24-20.

Spartans come in on a four-game losing streak; the Wolverines have not had a winning streak in the series since 2007 … MICHIGAN 28-13.

Badgers have won six straight and seven of eight against the Cornhuskers since Nebraska joined the Big Ten … WISCONSIN 38-17.

Interesting test for the Irish offense; best way to beat the triple-option is to score a bunch and force it to play with urgency … NOTRE DAME 28-23.

Cyclones have lost four games by a combined 11 points, including three by two or fewer … IOWA STATE 35-31.

Cowboys RB Chuba Hubbard is leading the nation in rushing by 33 yards per game … OKLAHOMA STATE 48-24.

Horned Frogs have lost three of four, with all the losses coming by seven points or fewer … TCU 28-21.

Gamecocks got stuck with a schedule that was too much for them to handle, especially after being forced to play a freshman quarterback … TEXAS A&M 28-14.

Hokies have found their stride and could win the ACC Coastal by winning out … VIRGINIA TECH 31-21. 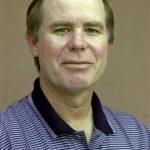