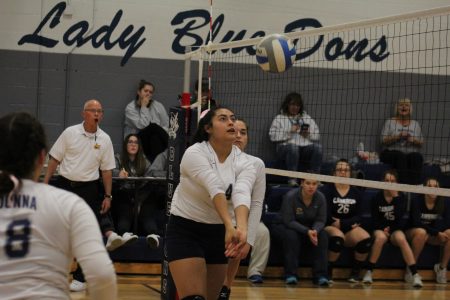 WEIRTON — With home-court advantage for the Class A Region One, Section One volleyball tournament, Madonna feels like it can win it all as the second seed, as long as it stays focused, plays loose and has fun.

Before facing top-seed Wheeling Central tonight for the opportunity, first came third-seeded Cameron. The Blue Dons swept the Dragons, 25-11, 25-14, 25-19, but Cameron gave them fits and did not play like a now 1-23 squad. Stamina and aggressiveness were the biggest keys, and the Blue Dons (8-14) had both on their side.

“Once my girls were focused and everything was going our way, we can play with anybody. We had a lot of aces (Tuesday). We ended with 13 aces, so they had a hard time handling our serves.”

The first set was the easiest of all. The closest score was 12-8 in favor of Madonna, before it ran away with it.

It was during the second set that the Dons played their best volleyball, even though Cameron had an early three-point advantage. After that, serves were on point and self-inflicted wounds went away, as the Blue Dons ended on an 18-5 run after trailing 9-7.

The third and final set arguably was the Dragons’ best, grabbing another slim lead early on. They even trailed 18-16 before Madonna, again, wore them out and stayed strong.

“We looked much better tonight than our record shows,” Cameron head coach Brackin Fish said. “We’re probably in one of the toughest divisions there is. We’re the small school in our division.

“Typically, we take teams to four or five sets. This definitely was not the Hundred-Central game. We don’t have much on bench, so when it comes to stamina, it’s tough. But, we were very competitive.”

“Our girls are very loose. One of the things we always talk about is to go out there, play loose, have fun and focus,” Kush said. “When they go out there and do that, they’re ready to play. Tonight, they were focused and loose.”

Cameron did not record stats.

The Blue Dons return to their home court for a 6 p.m. for a sectional championship matchup today against Wheeling Central. The Maroon Knights cruised to a sweep over Hundred in the earlier contest.

“Madonna is a phenomenal team,” Fish said. “I taught a lot of those girls last year (at St. Paul’s). They are a bunch of not only great athletes, but also great girls. They bond very well. I was very happy that we faced Madonna because I thought it might be our best chance to advance, but Madonna is a great team.”

So far this season, the Knights are 3-0 against the Blue Dons, who are hoping the fourth time is the charm.

“Every time we’ve played Wheeling Central, it went right down to the wire. It should be a really good game,” Kush said. “My girls know what’s at stake and should be ready to play. They’ll be loose, focused and ready to play.