Bridgeport is Oak Glen’s Next Test

Bears will try to slow down Indians’ rushing attack 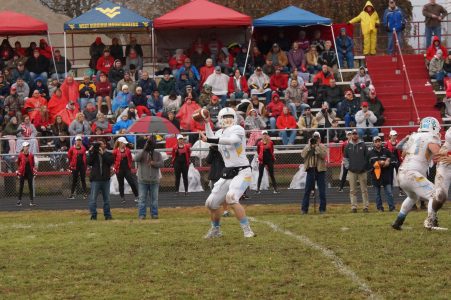 Photo by Andrew Grimm Nick Chaney is at the helm of Oak Glen’s high-powered offense. The Golden Bears put their undefeated streak on the line Saturday against perennial playoff power Bridgeport.

BRIDGEPORT — As teams advance in the playoffs, each round gets a little bit tougher.

Oak Glen finds itself in that situation this week. After slowing down one of the top athletes in the state and fending off an undefeated Poca team, the Golden Bears travel to perennial Class AA power Bridgeport in the state semifinals on Saturday.

“They are the experienced team, they have been in the playoffs year after year,” Oak Glen coach Ted Arneault said of the 11-1 Indians, the No. 2 seed in the state who topped Mingo Central, 28-8, in its playoff game last week to advance. “I’m very impressed with how well-coached they are. They have been in the dance before and they are not going to be intimidated in any way. They are a team that we have to mentally prepare ourselves for.

“I think the fact that we’ve been in close games, we’ve been in quite a few now, and we’ve been tested with adversity. I don’t think that (the moment) is going to phase us very much, we just have to be ready for this style of football. Their style of football is not one we’ve seen yet this year. They’re very good at what they do and they don’t hesitate and they don’t shy away. There is no give. It’s kind of like an unstoppable force coming at you and you have to figure out a way to slow them down a little more than they do you.”

His sixth-seeded Golden Bears (12-0) will have to adjust to the constant adjustments Bridgeport coach John Cole’s staff will make on defense.

“Bridgeport is a very impressive football team. Their defense is very impressive, it is one of the best defenses I’ve seen this year,” Arneault said. “They make you earn everything, they are very physical. Their linebackers are impressive, their DBs are impressive and their defensive line fires off the ball and gets after you. They run a 4-3 defense. They’re not too much different than the way Big Red has traditionally run their defenses in the past. They play a two-high shell, their corner sometimes play the flat, sometimes they are trap corners, they vary that. Their linebackers that sit on the outside, they do different things with them and adjust throughout the game.

“They are a team that uses iPads and adjust as the game goes on. What might work for you in one series might be completely unsuccessful the next series. You have to be ready to adjust to that because they are well-coached and adjust on the fly.”

The Indians defense allows 11.6 points per game, while Oak Glen averages 43 points per game on offense, with 430.7 yards (251.1 rushing, 179.6 passing). What has made the Golden Bears’ offense so dynamic, the multiple dimensions it can use, will be a key.

On the other side of the ball, the Indians average 35.9 points per game, while the Oak Glen defense allows 10.5 points per game. The Golden Bears defense is led by Michael Lemley with 14 interceptions, 88 tackles and 12 passes defended this season.

While the Indians make a lot of adjustments on defense, there isn’t much secret about what they do offense.

“Offensively, they run the ball right at you. They are a team that forces you to confront them and they try to impose their will on you,” Arneault said. “They have been very successful at that in just about every game this season. They get in a stick-I, which is double tight and they run three back in the backfield in a line behind the quarterback. They have different variations of it. They will get in gun and put all the back to one side and run them to the other, but essentially it’s double-tight, three back for most of what they do.

Stopping a tough ground attack is something that the Golden Bears showed they can do in their 25-20 win over Poca, as they limited the Dots’ Ethan Payne to just 139 yards. He was held to 24 yards on 10 carries in the second half when the outcome of the game was on the line.

“I think just slowing down an athletes Ethan Payne, who is a West Virginia record holder, if you can slow him down at all, your defense is doing pretty good,” Arneault said. “Part of that was our offense putting together one of the best drives I’ve ever been a part of in the fourth quarter. It really made a statement that we can play great defense and we can play ball control offense when we need to and if we need to, we can score quickly.”

The Indians have one common opponent with Oak Glen, Philip Barbour. The Golden Bears defeated Philip Barbour 45-0 in Week 2, while Bridgeport defeated it 48-0 in Week 10. The Indians’ lone loss came to No. 1 seed Fairmont Senior, 34-15, in Week 4.

The Golden Bears have been able to answer the call when they’ve had to, including Saturday, to win close games, as well as blow teams out. Hunter Patterson, who leads the offense in rushing and receiving yards with 2,165 total yards and 25 touchdowns, has an idea of why.

“They have been dog fights. We worked hard in the weight room, conditioning and just outlast the other team every time it’s close at the end,” he said. “We’re dogs and we fight. We know what we’ve got to do. We aren’t done yet. We’re working hard every day in practice and are going to give it everything we’ve got on Saturday to come out winners.”

The Golden Bears have formed a tight bond on the playoff run, which Arneault is happy to see.

“They are having fun, and I want it to be that way. I want them to be close,” he said. “But, the fun is not at the expense of getting the work done. You have to find that mix of both. You have to be able to be disciplined and focused when you have to be, but comfortable enough to have fun and like being around each other. Whatever the motivator is for fighting to get to stay together another week, there is something going right with how they like each other and treat each other. They love and respect each other. That part of the culture is something I cherish here.”

For junior lineman Danny Bealls, it’s a bond that goes back to their time growing up together – with one clear goal in mind even back then.

“We grew up playing ball together since bantams. From bantams all the way up to high school, we have been working towards this since we started playing football,” he said. “We always wanted to be the group, we always said we wanted to be state champions and that is what we’re working for.”

For senior Michael Lemley, who made the winning touchdown catch in Saturday’s win, it’s been motivating to see the fan support from the community.

“It’s great to be a part of it. There hasn’t been winning in this program in a while and we are bringing it back,” he said. “The support has been awesome. They said in the East Liverpool game you could hear our fans across the river. That just shows how much they have been behind us. That motivates us to work so hard to play for them on Friday and Saturday nights. The Oak Glen side was full Saturday, and it’s awesome – and we expected that because of the support we’ve got all season. We expect it again this Saturday.”

While the Golden Bears have accomplished a lot already — the first 10-0 season and home playoff game in school history and the first OVAC title since 1965 — there is not feeling of accomplishment just yet. They know they have two more tough wins to get for their ultimate goal.

“We don’t ever want to be satisfied. That is one thing we’ve strived for is we’re never satisfied at any time and we’re going to keep going,” Arneault said. “We haven’t gotten to this point by being satisfied with things that have happened along the way, we just keep going. That is a testimate to the way these kids have grown up. They are tough kids and I think they are a force to reckoned with and they are not going to quit.

“It’s special to be practicing on Thanksgiving. Any team that gets to practice on Thanksgiving, it’s just a blessing. You’re one of the few teams in America that get to do it. I think it’s like two percent of teams in America that are still practicing, maybe not even that. It’s just a special thing. I hope our kids take it in and remember it for the rest of their lives.”

“It feels great to be (one of the last teams from the Valley left). I think the OVAC is great football. I have been a part of it coaching, either as an assistant coach or a head coach, for some time,” Arneault said. “I’ve learned from some great men that are coaches in the Valley, and I still learn from them every day. I talk to them and value their counsel. We’ve got a great, supportive group of coaches around the valley that look out for you. I think they are rooting for any team in the area that does well. They have really reached out and made us feel special. It’s an honor that we get to represent the OVAC right now.

“I feel the support from the whole Valley. It’s special to have people from other communities supporting you. They send little messages and it means everything because it shows they are supporting you and watching you, just like we have done for other teams in the past. You root for you own. You may play them and do battle throughout the year, but it is amazing how when it (the valley) against anyone they rally together and root for you. It’s a family in its own. We have the Oak Glen family, the OVAC family and the Ohio Valley family.”