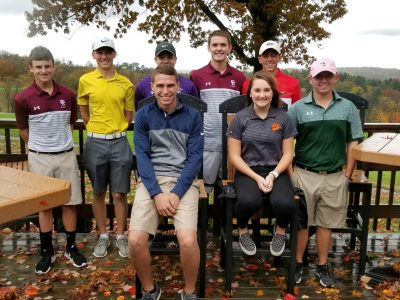 It was a season full of thrilling finishes, remarkable shots and clutch performances.

With freshmen stepping up big for their teams and making a name for themselves, juniors standing out and winning championships and seniors finishing up outstanding careers, the 2019 campaign was nothing short of unforgettable.

Now, it’s time to celebrate the top performers from the 2019 high school golf season in the Ohio Valley.

A man on a mission. Nothing was stopping Bilby from capturing his first state championship this year.

He fired a 74 on the first day and capped the state tournament with a 71 on Day 2 to earn the crown in West Virginia’s Class AAA.

Winning the state title, along with the OVAC 5A and regional championships not only earned Bilby a spot on the All-Valley team for the third consecutive year, but made him an easy choice for captain of the squad for the first time in his career.

“This is awesome,” Bilby said. “It’s nice to be captain. It wasn’t a thing until I was a freshman and now I’ve made it all three years.

“I had a good year this year and had a lot of fun. This is a great way to end it.”

His junior campaign brought many outstanding performances that included an incredible comeback performance in the OVAC Tournament as he caught fire down the stretch to shoot a 72 and secure medalist honors. Also, Bilby shot the lights out at the regional tournament with a score of 71 to solitify his spot in the state tournament.

With all of the hard work paying off, Bilby has some time now to reflect on his outstanding accomplishments — but he will be ready to defend his title as a senior.

“This feels awesome,” Bilby said. “It’s time to relax, take it all in and enjoy it.”

Consistent, calm and clutch. Three words every golfer thrives to be and three words that summarize Blain to a T.

The ultimate golfer — Blain capped a stellar career with Coach Dave Tallman at Magnolia with all-state honors and All-OVAC accolades.

He turned in an 81 on the final day of the state tournament to finish third overall after recording a runner-up finish during his junior campaign.

At the OVAC 3A Tournament, the Blue Eagles senior carded a 70 and collected runner-up honors for the second consecutive season after hitting a birdie putt in a playoff hole with the pressure on.

This is his third appearance on the All-Valley team.

He was named medalist in nearly all of Magnolia’s regular season matches this year and will leave big shoes to fill next season.

History was made at Harrison Central this season and Capers was a crucial reason why.

For the first time in school history, the Huskies earned a 4A OVAC golf title.

The team finished the event with a score of 349 — 15 shots better than the second place Cambridge squad.

Capers garnered third place overall and led Harrison with a score of 83, which earned him All-OVAC laurels for the second straight season.

Capers was a four-year letterman for Harrison’s golf program and as a senior he recorded a nine-hole average of 42, good enough to earn him All-Buckeye 8 recognition.

Capers also took home All-Buckeye 8 honors in his junior season with the Huskies.

Doerr busted through the door in a big way during his freshman campaign.

No stage was too big for him as he finished second in the OVAC 1A/2A Tournament with a score of 75 to lead Wheeling Central to its fifth straight OVAC title.

Then, he put on a show at the regional tournament to qualify for state as an individual.

In his first trip to the state tournament, Doerr shot a 92 on the opening day of the event, but finished strong with an 82 on Day 2 to finish the tournament with a score of 174.

The opportunity of a state tournament as a freshman is something that not many golfers get the chance to experience.

With the first year under his belt, Doerr will be a strong contender in Class A and the OVAC for the remainder of his high school career.

The drive heard around the valley.

Green has one of the most powerful tee shots in the OVAC and her play speaks for itself.

She was a key cog in Shadyside’s lineup and made her presence felt as she tied teammate Nico Bumba with an 88 in the inaugural Mid Ohio Valley League Championship at the Clair-Mar Golf Course.

Green was a top finisher in the 2nd Annual OVAthletics.com Girls High School Golf Tournament at Fairways Riverside Golf Course in Sardis, where she finished with all-tournament honors after carding a 93.

With two more seasons ahead of her during her prep career, the sky is the limit for Green, who is primed for a strong junior campaign.

Winning back-to-back OVAC championships is never easy. It has to be earned.

Johnson had one shot to complete back-to-back triumph’s and with the spotlight on him, he stepped up and delivered a par on the 18th hole at Oglebay’s Crispin Course to capture a 1-stroke victory and his second consecutive OVAC 3A championship.

Johnson carded a 2-under 69 and in the process, helped lift the Shamrocks to their second straight OVAC team title.

Johnson was also a catalyst in Barnesville’s first sectional golf championship triumph in school history and just missed the cut for the state tournament with an impressive card of 77.

He finished the season with a nine-hole average of 38.8

There is a lot that Krol accomplished this year and there may be even more for him to achieve next year as a senior.

The Purple Riders junior fell just short of qualifying for state in Ohio as he turned in a quality score of 79 at the Division II district tournament.

Krol’s success wasn’t only based on his postseason run but the Ferry standout shot a 79 at Oglebay’s Jones Course to capture his first OVAC 4A crown.

He also claimed Buckeye 8 and OVGL titles and turned in a nine-hole average of 38.85.

The sky is the limit as Krol returns next year as a senior with his eyes on reaching the state tournament.

It’s been quite a three-year span for Maxwell and the Maroon Knights.

He’s been a key part of three OVAC championship teams, a state title winner and now, he makes his third straight appearance on the All-Valley golf team.

Maxwell was crucial in helping Central capture its fifth consecutive OVAC 1A/2A crown this year as he carded an 80 at Oglebay’s Crispin Course to finish third overall and earn All-OVAC honors.

Maxwell has also served as a veteran leader on a young Wheeling Central squad and he will be a key member of this season’s basketball team, as well.

After winning its first OVAC 4A title in school history, the Harrison Central golf program will be in good hands next year.

Sam Santille will be back to lead the team as a senior and he is bringing back plenty of talent and experience.

This season, Santille helped propell the Huskies with an 84 in the OVAC 4A Tournament, just missing out on All-OVAC honors.

He fired an 86 to pace the Huskies in the district tournament and led the team all season with a scoring average of 41.7 and 16 birdies.

Santille also provided a pair of eagles and delivered the first hole-in-one in program history.

Seivertson was as much fun to watch on the golf course this season as anyone in the Ohio Valley.

He went shot-for-shot with Bilby in a thrilling OVAC match and he was right there with him in the regional and state tournaments, as well.

The Wheeling Park standout collected runner-up honors at state with a score of 155 to capture all-state accolades for the first time in his career.

His score of 74 was second at the OVAC 5A Touranment, which earned him All-OVAC laurels at the Jones Course and his round of 75 and three birdies in the regional tournament helped propell Coach Don Headley and the Wheeling Park Patriots into the state tournament.

His performance helped Wheeling Park continue its success as a golf program and next season should make for an exciting finish to what has already been a great high school career for Seivertson.

When it comes to clutch moments during the 2019 prep golf season, Tegano’s performance in the OVAC Tournament has to be listed.

The junior fired an eagle on the 17th hole and wrapped up a round of 73 with a birdie on 18 to win his first OVAC 1A/2A championship at the Crispin Course.

The Crusaders standout charted scores of 81 and 79 at the sectional and district tournaments, respectively.

He completed his junior campaign with a nine-hole average of 39.63 during the regular season and averaged a 77.66 during the OVAC, sectional and regional touranments and is looking to pick up where he left off as he heads into his senior year.